The newly launched chips are the hottest cannabis product in town 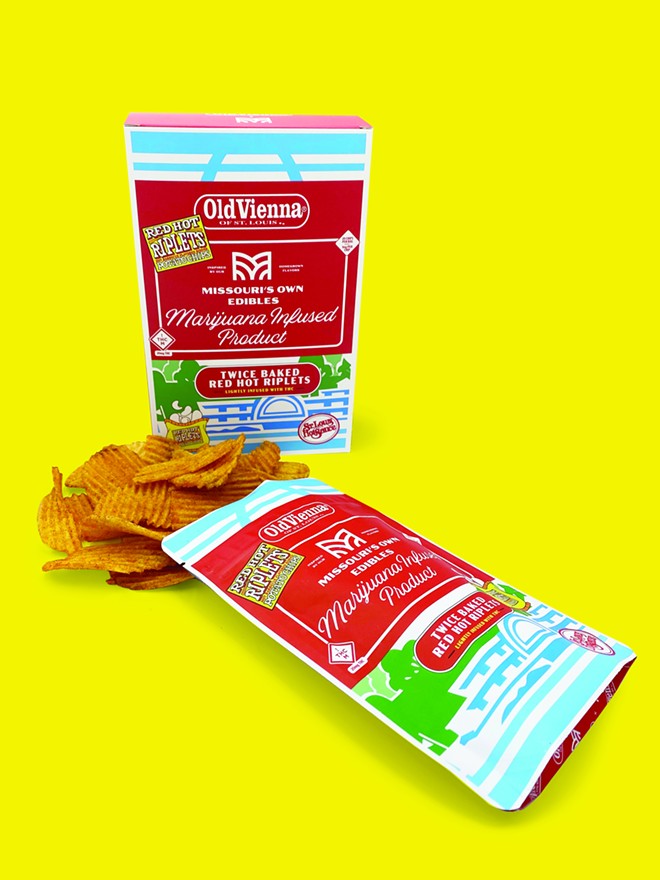 VIA MISSOURI'S OWN
The new line of THC-infused chips has proven so popular dispensaries can barely keep them in stock.

Regional cannabis company Missouri's Own made a big splash this month when it announced that it would be releasing a line of Old Vienna of St. Louis' Red Hot Riplets chips infused with THC, marrying the interests of many a stoner in a union so perfect it seems like a fairy tale.

The "twice-baked" chips, as they are playfully dubbed, have since become one of the hottest tickets in Missouri's medical marijuana market, flying off the shelves at every dispensary at which they are sold.

"Basically, every pack in the city has sold out within 24 to 48 hours of being on the shelf," says Tony Billmeyer, chief marketing officer of Missouri's Own parent company Show-Me Organics. "It's been a lot of fun seeing everyone's reaction."

It's easy to see why. Show me a cannabis enthusiast who doesn't like to tear into a bag of chips when they're ripped, and I'll show you a unicorn. The time-honored act of stuffing one's face with greasy salty crunchiness while high as a kite spans generations. This development has simply streamlined the process.

According to Billmeyer, plans for the collaboration have been in the works since August of last year. The ownership of Missouri's Own is overwhelmingly made up of people who are based in the state, he says, to the tune of 97 percent. Billmeyer himself is a born-and-raised St. Louisan, having attended SLU High School.

In keeping, the company is highly interested (pun intended) in incorporating Missouri flavors in its products. "You see a lot of brands in other places like California that really do a great job of capturing the pride that the people have for their state, and we feel like Missourians have that same deep pride, but there just aren't very many brands that articulate or capture that in the same way," Billmeyer says. "So that's part of what Missouri's Own was designed to do. The other piece of it is really celebrating Missouri flavors because whether you look at the culinary front or agriculture or any part of food in Missouri, we have a lot of innovative products and a lot of really interesting history. And so we wanted to pull that out and bring that into the edibles as well."

I managed to get my hands on a bag of the in-demand chips and decided to see if the hype was warranted. Each package contains about 20 milligrams of THC and costs $14 before taxes. I foolishly didn't count the total number of chips within — I was too eager to dig in, I suppose — but the serving size marked on the box seemed to imply that there were 20, which would mean each chip contains one milligram of THC. The instructions on the bag read, "Start low & go slow, 2-5 chips, wait 1 hour & increase as needed," which, let's be honest, is ridiculous. Who on Earth has the willpower to eat only two chips?

I sat down in a recliner at my home and turned on some cartoons — specifically, that new Beavis and Butt-Head movie on Paramount Plus — for the full stoned-chip-eater experience. I also opted to get fully into the spirit of Missouri's Own's celebration of local flavors, pulling a leftover half of a poorboy sandwich from Volpi out of my fridge to round out snack time.

I started with only one chip, and damned if I could taste any hint of the weed — these things are 100 percent Riplet with that familiar crunchy, spicy kick and just enough sweetness to light up the taste buds. I put a few more down the hatch before I opted to pile a bunch onto my sandwich, adding a satisfying crunch to the Hill staple and resulting in the most delicious (and only) THC-infused sammy I've ever enjoyed.

About 45 minutes to an hour in, I began to feel the effects, with my eyes feeling heavy and my whole body feeling relaxed. Watching the Beavis and Butt-Head movie was an excellent choice, its reliably juvenile humor hitting just right in my stoned state, and a chip-related montage from the film just about leveled me with laughter. Once the high really set in, I felt pretty damn couchlocked, positively glued to my chair, though I was still able to think pretty clearly. I was still feeling the effects four hours later when I decided to turn in for the night, ultimately sleeping like a baby.

Intriguingly, Missouri's Own has further plans for partnerships incorporating local flavors. I tried to get Billmeyer to spill the beans on the specifics, but he wouldn't budge.

"We have high dreams to launch a lot of iconic Missouri foods with THC takes on them. I will not disclose exactly what's coming next, but we also want to cover the state geographically," he says. "So we'll have some southwest Missouri markets, we'll have some Kansas City partnerships and, yes, we'll have additional St. Louis partnerships."

Got it. So, THC-infused Imo's pizza, then?

"We are open to any partnerships with iconic local brands," Billmeyer says with a laugh, "and that would be a dream come true."