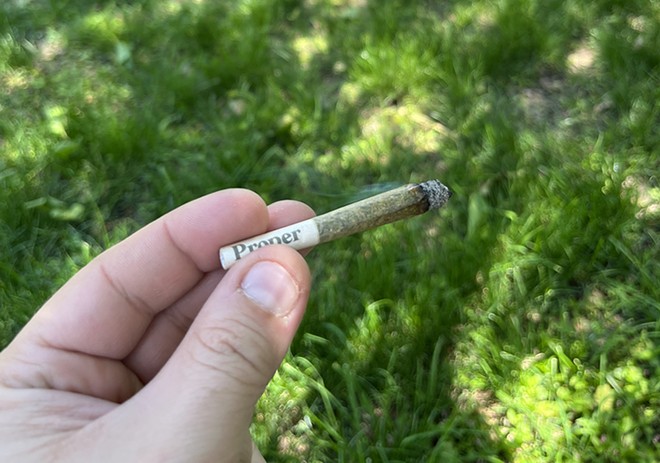 When I began dabbling in the dark arts of jazz cabbage in college, my first sensei was a curly haired acquaintance of a mutual friend. He was generally laissez faire but ran a tight ship with his brick weed offerings (brown and more brown were the top two sellers). As I learned more about the plant, I became curious about the effects it had on people, and how we could take advantage.

"So could you combine two weeds together for someone to like, make the effect different?" I hazily pondered.

"No man," the brick weed curly haired dude replied. "Like you could, but no."

I've usually maintained this one-strain-per-smoke-session attitude subconsciously since then. Of course, there are some exceptions: You're low on your stash, get some new flower and polish off the old stuff with some of the fresh. But the smoke is usually focused on the strain wrapped up in the Element paper or in the bubbler or your preferred paper or toking vessel. It's the star of the show. The belle of the ball. What The Guy insisted you take home that time you met up with him, even though he didn't remember the name of it but swears it's "gas, bro."

Another thing I've generally avoided in my personal weed practices has been pre-rolls. My experiences have varied immensely, often negative, plus I'd honestly rather roll it myself. It's part of the vibe, man.

All this is to say, there is a subset of pre-rolls that I became aware of on a recent visit to Proper Cannabis' newest location in Crestwood on a weekend evening: the blended flower pre-roll. They came to my attention when I saw the name "Cereal Milk" on the menu as a pre-roll option, and the budtender explained that it was a house blend of flower, not a hybrid or related to the Cookies strain of the same name. The budtender explained that Proper's staff has flexibility when it comes to making the mixed blend pre-rolls, and will make different kinds for staff parties where they try combinations out and name them.

Proper's Cereal Milk pre-roll blend combines Ecto Cooler, Tiger's Milk and Cookies & Cream. But I was more interested in the Rotten Runtz blend: Runtz, Horchata and Chem 91. I've had Proper's Runtz and Chem 91 before separately and was excited about pairing them up. I purchased a 2.5 gram pre-roll pack (five 0.5 gram pre-rolls) for $45.30 after tax. 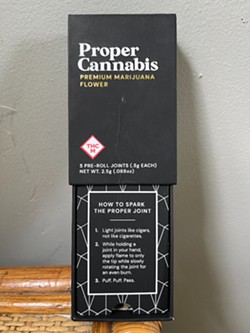 The pre-rolls come in a box with a mechanism that forces you to press down on its backside to push out the joints — it's weird. I'm sure it's a safety precaution, but it is also just clumsy to open. Once you're finally inside the box, there's a three-step set of instructions on how to ignite the Proper joints: Light it like a cigar, rotate the flame for an even burn and puff puff pass. The last step wasn't something I planned on doing, since I was flying solo on this mission.

I indulged in the first Rotten Runtz pre-roll after a busy day at work. Sparking the J was easy per the instructions. Occasionally I got a nice sweet finish/exhale on the joint, but otherwise I wasn't getting the flavorful terpenes I knew from the individual smokes of Runtz and Chem 91. The effect began at the top of my head and pulsed down to my feet. The body high was much needed after a long day of working, without heavy cerebral effects. The second pre-roll confirmed some of the effects from the first joint: great for the body, without impeding the mind. However, the third pre-roll made clear to me that I wasn't getting the terps I thought I was going to get when I read the options at the dispensary, despite the fact I'd enjoyed some flavorful Proper strains as flower and as pre-rolls before. At least the scenery while smoking the third pre-roll was great: my backyard watching my dog play. The effects gently ramped up as I rode the vibe of birds chirping and thought over dinner plans.

Up until this point, each joint smoked was a half gram. So let us up the ante. I decided to smoke the last two pre-rolls, numbers four and five, together. The terpenes were much more present in the last smokes from the pack, with a nice gassy note (thanks to the Chem 91) on the inhale and the finish. I found some Runtz notes too, which made the entire smoke slightly sweeter, or I guess the gas not as gassy. As I got halfway through the second pre-roll, the effects were much more present, with a mild head high accompanying the relaxing body high that started in my arms and legs, and also settled in my face, specifically the cheeks. The higher dose definitely was the move for me personally. In my notes I wrote that the head effect came on 30-plus minutes after the smoke, and that my ass "became one with the couch." I apologized to my dog since the w-a-l-k got delayed in lieu of George Carlin's Jammin' in New York standup special.

In all, I was impressed with how evenly the Proper pre-rolls burned. The effects from the Rotten Runtz were consistent across the five joints, with more of a body high with mild cerebral effects that allowed for clear thinking without racing thoughts. That is, unless you smoke two of the pre-rolls for a higher dose, in which case the head high becomes more of a factor, from my experience. Are these something I'm gonna hunt down? No, but if I'm in a pinch I'd grab a pack. I'd also be more interested in a 1 gram pre-roll pack. But I know that the 1 gram pre-rolls are not for everyone, so I'd definitely recommend these half-gram pre-roll packs if your tolerance is a little lower than this raconteur.