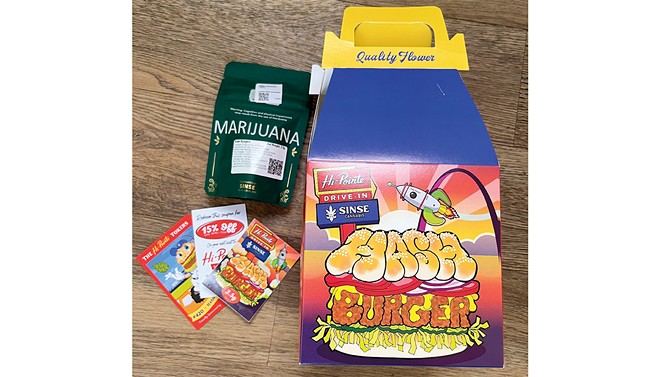 GRAHAM TOKER
It's everything a munchies-afflicted stoner could ask for.

Out of any restaurant in town (besides maybe Taco Bell), it makes the most sense that Hi-Pointe Drive-In would collaborate with a cannabis company. So it's less than surprising that the weed-punniest burger-slinging spot in St. Louis would team up with Sinse, the vertically integrated medical marijuana operation behind Swade's multiple local locations.

Enter Hash Burger. I purchased the strain at Ellisville Swade when I got the Rainbow Belts strain I reviewed recently. I have to admit, it felt weird walking out of the (medical!) dispensary with a Happy Meal-esque box full of weed. In addition to the eighth of Hash Burger flower, the pack also included a sticker, a trading card with stats and a coupon to be redeemed at Hi-Pointe Drive-in for 15 percent off any menu item. Indeed, this was a Hashy Meal.

The trading card had a baseball-card-inspired set of testing statistics for the new strain. It's categorized as an indica-leaning hybrid with a total THC content of 23.5 percent and more than 2 percent terpene content — most prominently myrcene, which comes in at 1.9 percent. I paid $30.20 after tax for the eighth, which was included in a sale.

Admittedly, I was a bit apprehensive about smoking this eighth from Sinse after a less than stellar experience with their Rainbow Belts, which I found to be lacking in the smell and flavor departments. But it's the holiday season, and I gotta do a solid, so I stay on Santa's Nice List. Mercifully, when I cracked open the Hash Burger bag, there was a smell! A small victory, and a way better beginning to this review.

I wanted to make sure I wasn't leaving any stones unturned with the flower, so I transferred the nuggets to a glass jar with a humidity pack. The buds had an OG / kushy fragrance to them. I dove into the bag and rolled up a small joint with a few small nugs. As I smoked, there was indeed a very dank, nostalgic kush smoke to it. As I settled after the smoke, I was hit with a massive munchie rush. A small walk to the freezer to grab some ice cream hit the spot.

The next joint of the Hash Burger I smoked had a great effect. My back was tensed up from a long work day, and it definitely helped me relax. Since I'm a big OG fan, I like the kushy vibes in this strain.

I swiftly moved to finish off the bag with a king-sized, after-work joint. Once again, the effect was great for my aching back and kept me loose on a walk while smoking. When I got home, I crashed down hard and felt the couchlock creep up. However, the Hash Burger had a different idea, and I wound up getting dinner instead. The munchies definitely won this round.

Armed with the coupon from the Hashy Meal box, after obviously getting in the right state of mind before leaving, I had my designated driver transport us to our nearest Hi-Pointe (safety first, stoners).

I ordered the Toklahoma burger, and it was a hit. The components of the meal reminded me of two great burgers: the Oklahoma onion burger and the In-N-Out Animal-style burger. Both patties were hit with mustard for an extra zing on the grill, and it was finished with cheese, more mustard, onions and pickles. It's a classic set up, like a bong: It hits hard, it's simple and to-the-point, and both leave you in a slump. I would personally like to see a toasted bun, but I still would order that burger the next time I was gassed up and needed to fend off the munchies.

Would I get the Hash Burger strain again for my stash? Possibly. According to the enclosed trading card, this was the first growing run of the cultivar, so I imagine it will get more dialed-in down the line. I definitely enjoyed this strain better than Rainbow Belts in terms of smell, flavor and effect.

And if these collaborations are gonna make it easier to quell the munchies, then Sinse's Hash Burger strain and the Toklahoma burger make for a Hashy Meal indeed.