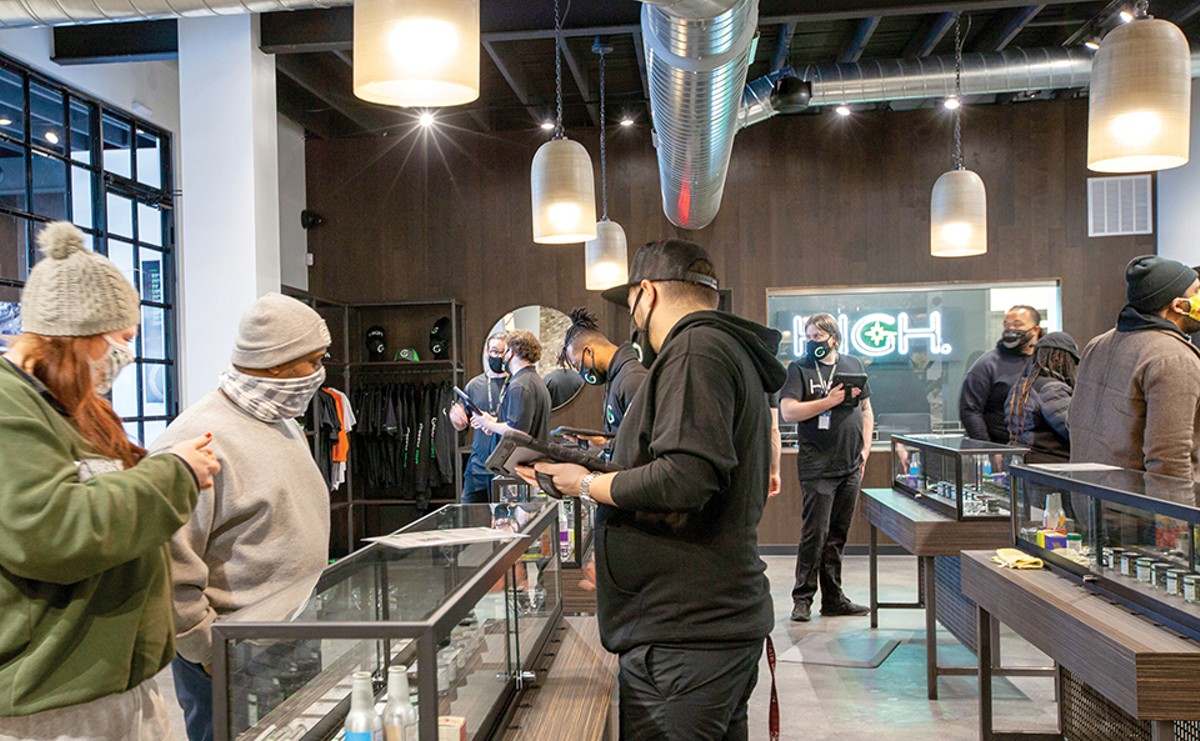 I thought I'd seen the pinnacle of pot-purchasing convenience as a teenager.

Back in those days, one of the people whom I would frequent for weed-buying purposes had set up an ingenious method of peddling his wares out of his parents' basement. This fella, who I'm going to refer to as This Guy going forward (not to be confused with The Guy or That Guy), had installed a small doorbell on the outside of his basement window. But rather than ringing a bell when pushed, the button was hooked up to a lamp, so whenever someone would come to pick up a bag, they'd simply hit the button a couple of times, whereupon a light would begin flashing in This Guy's room, alerting him to the presence of a customer. This Guy would then open up his window, greet whomever was standing outside and supply them with whatever they came to buy.

It was genius, really. This Guy's parents were none the wiser, because they wouldn't even notice people coming over and sneaking into their side yard, nor would they hear anything when people did show up. It also 86ed the tedious ritual of having to sit in your dealer's house and pretend to care about anything they have to say, as you were on your way in mere minutes and never even invited inside in the first place. Really, it was a great setup.

And while it's still fair to say that was the most convenient way I have ever purchased ten-strips of acid tabs in my life, we have an exciting new contender on the weed front, thanks to the drive-through window at Greenlight Dispensary's Ferguson location (517 South Florissant Road, Ferguson; 844-785-9333).

The ordering process here is even easier than the ingenious idea This Guy had concocted. Customers simply hop onto Greenlight's online menu, pick out what they want and then upload photos of their ID and medical card. Once the order is accepted, you get a series of text messages helpfully telling you its status until you're ultimately informed that it's time to come pick up your goods.

The drive-through itself is located in the back of Greenlight's Ferguson location and is less like a fast-food situation than it is an automatic car wash. Customers pull up to a bay door and wait for it to open, whereupon you pull into a small garage with a window within. There, you hand over your ID and medical card, and soon you are handed a bag containing your goods, after which a second bay door opens and you're on your way. No muss, no fuss.

That process was a dream, and certainly a huge selling point for Greenlight, but I still wanted to get a good sense of the dispensary itself, so after I finished that transaction I parked my car out front and made my way inside. Greenlight is different from many of the local dispensaries in that it doesn't seem to be trying too hard to style itself as a house of medicine, which can come across as kind of stuffy — on my visit, for example, Ludacris, Busta Rhymes and Nelly were all playing over the house speakers, none of whom I've ever heard at my doctor's office. As a fan of early 2000s radio rap, I found it to be a welcome development. Upon entry, I gave my ID and medical card to the person behind the front desk and sat for just a moment in a small waiting area before my budtender came and led me to the sales floor. 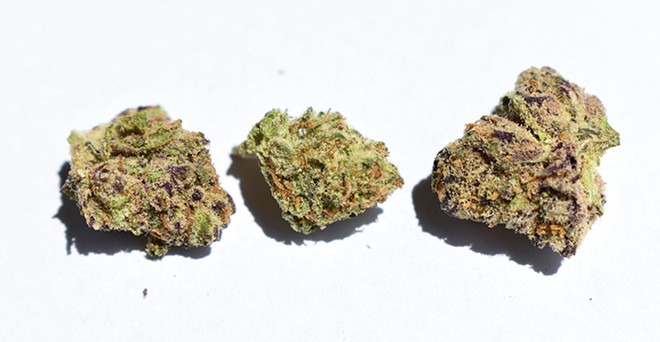 Inside, the shop has several glass cases displaying its products. One interesting detail this place has going for it too is a flatscreen TV showing multiple views of Greenlight's grow operation in Kansas City, at a 98,000-square-foot former Pepsi factory where all of its cannabis, edibles and prerolls are cultivated and packaged for sale. It's nice being able to see exactly where the product you're purchasing comes from.

Another thoughtful detail is Greenlight's pricing structure, which builds taxes into the advertised price of its products in the store — helpful for avoiding the receipt shock that can come when those taxes are piled on at the end. (It should be noted, though, that the prices listed on the website are still pre-tax, which can be a little confusing.)

I started with the AK-47. Rated at 14.93 percent THC, this Greenlight-branded strain came in a little pouch of "budlets," meaning it ain't the prettiest to look at, but it comes at a discount. Essentially, you're dealing with the shake at the end of the bag here, but I knew what I was getting into so I had no issues with that. Upon opening the bag I was met with a rich, dark smell, sort of a cross between coffee and chocolate. The crumbles of weed within are a light, bright green color, with hints of darker green and orange hairs, and a really great, even distribution of trichomes. On breakup the fairly dry budlets crumbled easily and left a light dusting of keef all over my fingers. On inhale there's a rich, sour flavor that reminded me of the crawly leaves that sometimes separate buds — still pleasant, but not top-notch flavorwise or anything (again, to be expected, and consistent with the fact these are budlets). This strain delivers a relaxed and mellow high that left me with the focus and concentration necessary to beat the Temple Tempest level of Donkey Kong Country, even as the Milwaukee's Best Light I was also consuming eroded my hand-eye coordination. For that I will be forever grateful.

Next up I dove into the Lava Cake. Rated at 20.36 percent THC, this Greenlight-branded strain boasts smaller, dark green buds with hints of lime green and purple patches, absolutely encrusted with orange and white hairs and a generous dusting of trichomes. The nuggets are tight and dense, and much more moist than the AK-47 budlets were — really beautiful, well-structured little buds — and I again got keef all over my fingers on breakup (a grinder might be the way to go with this one). Both the smell and taste of this strain are exceptionally fruity and sweet — downright delicious, even — and I felt its effects almost immediately. This stuff is strong as hell, and I found myself high as a kite within only minutes, my eyes droopy, my body relaxed and my appetite stimulated to the tune of an entire bag of Lay's potato chips. Handle with care, especially if you are a novice smoker (or on a diet).

I had a little trouble with the Magic Melon preroll. While the weed itself is top-notch, I found it difficult to hit for about the first third of the joint, like it was packed too tight. I had to keep squishing it up and rolling it between my fingers to get a pull off of it, and by the end it had a run on one side. None of this is the end of the world, by any means — especially considering the quality of the cannabis. Rated at 14.34 percent THC, this strain, also Greenlight-branded, is exceptionally smooth on inhale, with a sweet, chocolatey taste that left me pleasantly high but not debilitated. It was certainly worth the trouble of a stuffy joint, and I'd suspect mine was an outlier anyway.

All told, Greenlight is yet another excellent St. Louis dispensary with its own unique personality and some impressive products — that Lava Cake, especially, is a joy to behold. Its drive-through is nothing short of a revelation, one that will be invaluable to customers who are intimidated by the experience of visiting a dispensary — or even those who are just big on convenience.

Now, when is Missouri gonna legalize medicinal acid tabs? I'm looking forward to hitting up a drive-through for that.

Welcome to Higher Thoughts, wherein ol’ Tommy Chims smokes one strain from this review — in this case, Lava Cake — and then immediately writes whatever comes to mind in the hopes of giving you, dear reader, a clearer picture of its overall mental effects: no rules, no predetermined word counts and, most crucially, no editing. Here we go:

I know that this may ruffle a few feathers, and I’m already kicking myself for walking into this hornets’ nest, but I just can’t keep quiet on this subject any longer: I think the trombone is the most badass of all the brass instruments to play an “air” version of. You get to punch your fist wildly with each change in pitch, you can pretend to know what you’re doing as you slide your arm back and forth in smaller and larger increments to correspond with the notes, and it’s not the air-trumpet, which really just consists of the wiggling of a few fingers and an air-mute if you’re lucky.

Now, I know what you’re going to say: What about the saxophone? And yes, I was alive during the Clinton administration too, so I know that the sax is, like, cool as hell or whatever. But consider this: Clinton’s support for the 1999 NATO bombing of Yugoslavia was a politically motivated act that may well have been a war crime under international humanitarian law, and the actual act of playing an air saxophone is not dissimilar to what it would look like if you were to grab a ferret and tickle it with both hands. Plus you gotta believe that J.J. Johnson would never have allowed the bombing of the RTS headquarters to occur under his watch. I’m sorry, but it’s just not badass, man.

Thomas K. Chimchards is RFT’s resident cannabis correspondent and aspiring air-tromboner. Email him tips at [email protected] and follow him on Twitter at @TOMMYCHIMS

Is Missouri's Legal Weed Amendment Too Good To Be True?