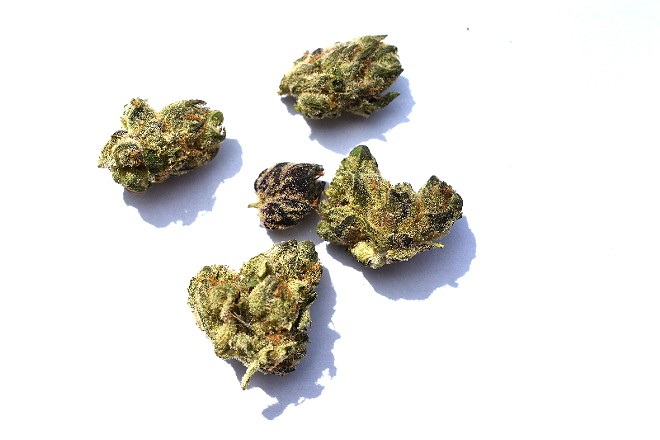 In spite of its considerable level of popularity, there’s a persistent air of confusion surrounding Illicit Gardens’ Purple Chem strain.

The problem comes from the moniker of the highly sought-after cultivar. Depending on its provenance, the name “Purple Chem” could refer to either Illicit’s strain, which crosses Stardawg and Purple Punch; or the Cali Connection’s cross between Chemdawg 91 and Pre-98 Bubba Kush, which got first place in the indica category in 2016 in both the Los Angeles and Michigan Cannabis Cups; or Purple Chemdawg, a well-regarded indica-dominant cross between Chemdawg and Granddaddy Purple (and the most well-known variation out of the three).

Even Leafly.com — essentially the online bible of cannabis strains — doesn’t seem to know what’s what in this case. When you search the strain on the site, the Purple Chemdawg variety is the one that comes up, but its description mentions Cali Connection’s variety as well. Making matters even more complicated, its local results for dispensaries at which to purchase the strain are all linked to Illicit’s products. Weedmaps.com, meanwhile, includes this line in its Purple Chem product description: “Purple Chem is sometimes mistakenly called Purple Chemdawg but that’s a different strain.”

It’s confusing, yes, but there is one thing that can be said for sure: Illicit’s Purple Chem is a phenomenal strain of cannabis well worthy of its hyped status.

In an effort to authoritatively come to that conclusion, I purchased an eighth of the strain for $65 at the newly opened Star Buds dispensary in University City. I opted to pick up a half-gram Purple Chem live resin vape cartridge for $70 as well, owing to the fact that Star Buds offered to toss in a free branded vape battery if I did so, and I’m not one to pass up a deal.

I dug into the flower first. Rated at 20.3 percent THC, my jar came packed with smaller popcorn buds, light green in color with plenty of purple spots and rust-colored orange hairs. When I opened the jar, I was greeted with a bright citrus bite and a fuel-like smell, with some subtle floral notes as well. Breaking it up left my fingers dusty as opposed to sticky, with a fine coating of keef covering the buds. On inhale that citrus flavor was most prominent, with some spicy wood notes on the finish.

As for effects, Purple Chem delivers an extremely relaxed high, which first manifests itself in serious puffiness under the eyes and a propensity to get lost in thought before giving way to a fairly strong and sedating couchlock effect. It’s spectacular for pain and brings remarkably little anxiety for a strain of its potency, and I wrote in my notes that it’s a perfect “Saturday morning cartoons” strain — a bowl of cereal, a bowl of Purple Chem and some animated programming followed by a lazy afternoon nap would make for a fantastic way to spend a day off, at least in this reviewer’s estimation.

The live resin cart, meanwhile, takes the properties of the flower version of the strain and kicks them up several notches. For the uninitiated, live resin is a cannabis concentrate that is flash-frozen before it is extracted rather than being cured or dried, allowing it to retain the terpenes that give the strain its taste and unique effects — in this case limonene, caryophyllene and linalool — meaning that the citrus, wood and floral flavors of the strain were still present here. And at a whopping 69.47 percent THC, Illicit’s Purple Chem packs a wallop. After just a few pulls I found myself brainscramblingly high, wandering into rooms without remembering why, turning lights on and off for no reason, and in general just being spaced out as hell while still feeling great. All of the pain-relieving and relaxing elements of the flower are accounted for in the live resin version as well, but in an even stronger manner — in other words, handle with care if you’re a novice smoker.

In sum, regardless of the form it takes, Illicit’s Purple Chem strain is a great choice for those who prefer a cannabis experience that leans on the indica side, with excellent pain-relieving effects and a tremendous sense of relaxation — not to mention its gorgeous looks and flavorful taste. And though its conflation with similarly named strains can bring some confusion, if those other cultivars deliver an experience that’s anything like it, you can definitely sign me up.

After all, would not several different flowers all bewilderingly called a “rose” not smell as sweet?