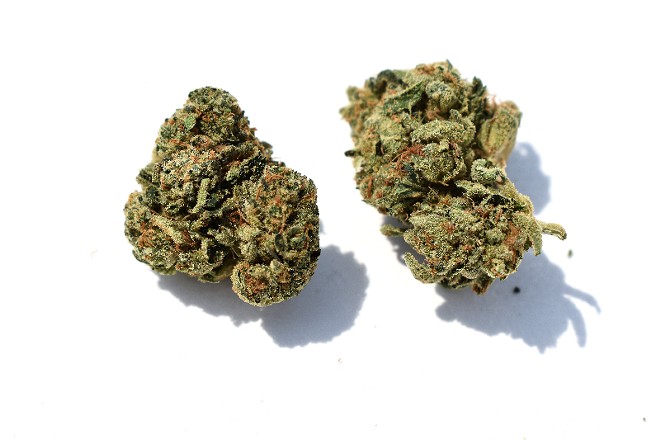 TOMMY CHIMS
Cookies' Helium strain, new to the St. Louis market, will have your head in the clouds.

After a long wait and with a considerable amount of fanfare, the lifestyle brand turned Vaunted Cannabis Company Cookies has officially entered the St. Louis market.

The popular San Francisco-based brand, founded in 2010 by rapper Berner and Bay area breeder and cultivator Jai, has partnered with Swade Cannabis to unleash its products on the Show-Me State. Cookies teamed up with Swade’s cultivation arm, BeLeaf Medical, to bring its strains to St. Louis’ five Swade locations on May 15, even celebrating the launch with an after-party at the Whiskey Ring.

According to Swade’s Director of Dispensary Operations, Jack Haddox, Cookies’ move into the Missouri medical marijuana market was about two years in the making.

“When Missouri first started issuing licenses in 2019, 2020, Cookies actually approached us and wanted to buy one of our dispensaries,” he says. “At the time, we didn’t really want to do that; we wanted to hold on to our licenses. But because it might be a good partner long term, we kept up conversations, kept things going.”

When BeLeaf was awarded three cultivation licenses, Haddox says Cookies reached out again with a new proposition: to be cultivation partners.

“So that means we basically get to cultivate their strains, their exclusive genetics, and bring that branding and that product to Missouri,” he says.

The end result is a line of flower strains that includes Pavè, Apples & Bananas, Red Velvet, Helium, White Runtz, Medellin and Emerald Cut. A highly sought-after strain named after NBA legend Gary Payton, with whom Cookies partnered when originally bringing the strain to market, is set to arrive in St. Louis in the next couple of weeks as well. Haddox says they’ve already seen a lot of anticipation for that cultivar’s release.

“It’s got a lot of attention because it’s got Gary Payton’s name on it, and it’s just a quality strain,” he explains. “So people see that it’s got his picture on the bag, on the packaging, and it’s one of those things that kind of just took off.”

Payton is just one of several high-profile names to be associated with the Cookies brand. The company has also teamed up with a number of celebrities in the world of hip-hop, including Snoop Dogg, Rick Ross and Run the Jewels. In fact, two of the strains currently in the St. Louis market, Red Velvet and Helium, are part of Rick Ross’ line.

I took a trip to the Swade location in the Grove on a recent sunny afternoon to pick up some of the hot new products myself. After perusing the wares and sticking my nose in a handful of jars, I opted to go with the Helium, whose strong citrus smell I found enticing. It cost me just shy of $60 for an eighth after taxes.

But before I dug into it, I asked Haddox to give me the lowdown on the strain.

“So that is actually a cross between two of their other very famous strains, Cheetah Piss and Sour Cookies, which by themselves don’t really sound very appealing,” he admits with a laugh. “But they are a couple of really, really popular strains. And it was actually originally bred by a breeder called Lemonnade, which historically has bred and grown really strong quote-unquote ‘sativa’ strains, so kind of more uplifting, creative-feeling type of strains.

“You will like the Helium a lot,” Haddox assured me. “If you watch a helium balloon, it’s gonna float away. You might too.”

I’ll be the judge of that. I tore into the bag on a Thursday evening, and was immediately punched in the face with that citrusy, piney smell. A lot of times when reviewing flower in Missouri, I’ve found that I have to hunt through a bit of a grassy aroma to get to the more hidden scents, but with Helium it was more like sticking my nose in a can of Lemon Pledge. The dense, strawberry-shaped buds were a dark forest green, covered in dark orange/rust covered hairs. On breakup, the insides were a bright lime green, speckled liberally with little reflective trichome droplets, and my fingers got pretty sticky — a grinder would probably be best for this stuff.

On inhale, the flavor had a strong fuel-like taste with an intensity that felt similar to what I might expect doing dabs, but to my surprise, on exhale it had more of a pleasant floral flavor, and it was an exceptionally smooth smoke. “What have they done?” I wrote in my notes. Impressed, I decided to push my luck, and took a huge rip off of my spoon pipe just to test the limits of this stuff. Again to my surprise, I barely coughed at all, and when I did, it tasted kinda like gummy candy. Truly remarkable.

After four to five hits, I decided to put the bowl down — I could already tell this stuff was going to hit hard — and I began playing a popular cowboy-themed video game I enjoy. I was riding across the prairie on my noble steed, a horse by the name of Britney Spurs, in search of a turkey to hunt, when I spotted my prey. Slowly, I pulled my rifle from my back and took aim, blasting the bird with a clean shot through the head. As I victoriously approached my kill I moved my foot IRL and accidentally unplugged my Xbox with it, and was surprised to find how devastated I was to have so unceremoniously cut my turkey hunt short. In other words, this shit had me in the fuckin’ zone.

Now paying more attention to my actual, physical, non-cowboy surroundings rather than those in the virtual world, I soon found that I felt alert and creative, consistent with this strain’s reputation as a sativa. I could best tell this was the case by the fact I was taking far too many unnecessary notes for this review, writing things down that certainly would be of no use to anyone. (One example I found in the morning: “‘Charles Bark’ would be a hilarious name for a dog.”)

In all it felt like a strong, clean high, with no couchlock and not much in the way of appetite stimulation. My brain was pretty thoroughly scrambled, and I found it difficult to concentrate, but in a good way, with my mind pleasantly flitting around from one thought to the next like a butterfly. My chronic pain, which had been bugging me all week, was not nonexistent, but was not so insistent either. I didn’t feel much in the way of anxiety, but I noted that I definitely could have gotten to a pretty anxious place if I hadn’t made the wise decision to stop before I finished the bowl. This is powerful, top-shelf stuff, and if it’s any indication of the quality of Cookies’ strains overall, you can sign me up to sample every one of the rest that is on the market as well.

For now, that means stopping into one of Swade’s dispensaries. Haddox says that the brand will eventually be carried in other Missouri shops, but most of those will be on the other side of the state, so that locally Swade can entice people into their own St. Louis-area stores. That surely won’t be a problem once word of Cookies’ quality reaches the masses.

“The overwhelming majority of people have been very, very positive on the strains and brands,” Haddox notes. “So it’s been great, and it’s gonna be fun to watch it grow.”