What the Hell Is Diamonds & Sauce? Tommy Chims Investigates 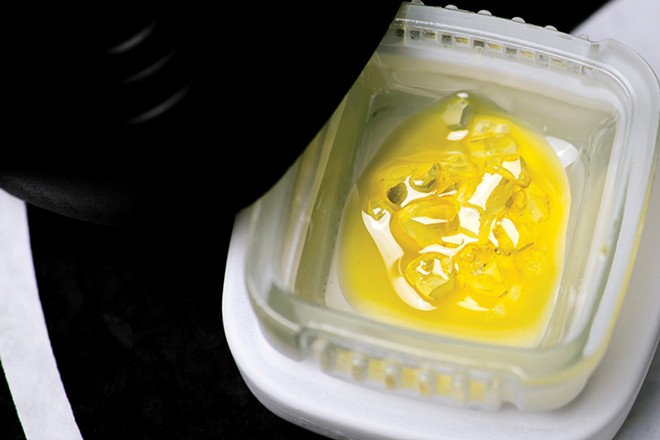 VIA PROPER CANNABIS
Chunky goo has never tasted so good.

Essentially a strange alien goo with a sprinkling of small, glass-like chunks, the concentrate has nevertheless found a rabid following among heavy marijuana users.

That's because those chunks — "diamonds," as it were — are among the most high-powered cannabis products on the market, with THC levels that can top 99 percent when heated. Additionally, the goo — or "terpene sauce" — is created using live resin, preserving the unique flavors, smells and effects of the individual strains.

The procedure used to create diamonds & sauce is complex, mad-scientist stuff. First, cannabis trim or flower is put through a process that uses a solvent, often butane, to extract uncured live resin. After the solvent is removed, the resultant saucy goo sits in a dark room during a process known as "diamond mining." Over the course of a few weeks, separation takes place, with the terpenes creating a liquified layer on the top while cannabinoid crystals develop on the bottom. The individual elements are then separately purified before being recombined into the final product: THC-A crystals soaking in a pool of terpene sauce.

But you didn't come here for a science lesson, and I very nearly flunked out of science class in high school, so let's move on to what I was really good at in those days: getting high as fuck.

I picked up some Proper Cannabis-branded diamonds & sauce from N'Bliss' Manchester location (1266 Old Orchard Center, Manchester; 314-627-2499), opting for the Ecto Cooler variety because I'm a sucker for nostalgia. It was on sale for under $70.

Upon opening the small jar, my bounty's smell was bright and overwhelming, with notes of pine, lemon and fuel that combined into a scent not unlike Pine-Sol, which my friend could smell from across the room. The yellow slime inside was dotted with tiny crystals — it almost looked like mutated caviar. I fished a single "diamond" out of the goo with a small metal tool designed for this specific purpose and loaded it into my dab rig, heated it with a torch and took two pulls.

The concentrate was flavorful, the citrusy pine taste prominent, but it was also rather harsh, sending me into a coughing fit. Welcome to the world of high-powered concentrates, I suppose — this stuff clocks in at an astounding 90.7 percent in terms of total cannabinoids. In other words, I most certainly did not need to hit it twice. I soon felt puffiness under my eyes, and after five minutes was well and truly blasted into outer space, perhaps slightly uncomfortably so.

I took a shot of whiskey to level things out, and I soon slid into a high that found me focused and alert, creative and energized. Ecto Cooler is a well-regarded sativa-dominant hybrid, and indeed I felt a cerebral high that had me up and around, chatty and feeling great.

I soon became intently focused on the antics of the two dogs with whom I share a home. Dog A did this thing she often does — just to be disrespectful — where she straddles Dog B's face while she is just lying there minding her business. Sometimes Dog B stands up and Dog A's hind legs get suspended in the air on Dog B's head, who then starts pushing her forward helplessly like a wheelbarrow. This was one of those days. It's Dog A's own fault for being an asshole and it's funny every time.

All told, I was satisfyingly fried for a good three hours, with no couch lock and little in the way of the munchies. The sheer intensity of the high brought me back to the days when smoking was an event rather than a daily habit.

That alone would be enough for me to be sure to keep this form of cannabis in my stash going forward, and the fact that it takes so little to get you there is just icing on the chunky goo.