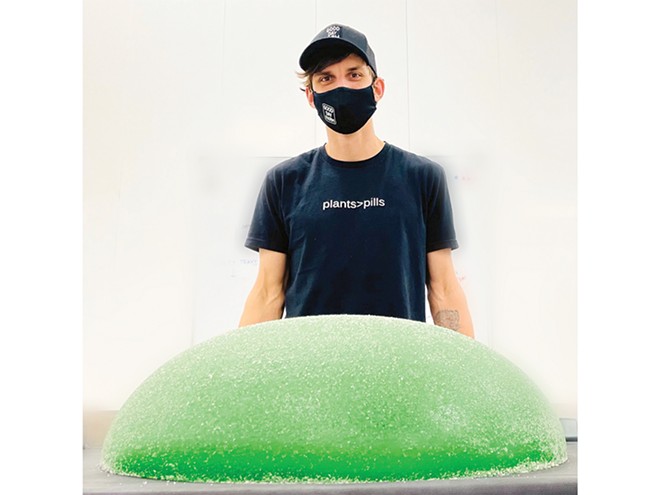 
Local fans of incredibly overpowered, sewer-lid-sized THC edibles have much to celebrate, as the world's largest cannabis-infused gummy was recently born right here in Missouri.

This 135-pound medical marijuana monstrosity was brought into the world by Little Rock-based cannabis company Good Day Farm, which created it to celebrate the arrival of its regular-sized line of gummies into Missouri's market.

Containing an astounding 116,000 milligrams of THC, the two-foot-wide sour apple giant comes in response to a record-breaking cannabis brownie produced in Massachusetts in December. While that confectionery colossus clocked in at 850 pounds, it contained only a paltry 20,000 milligrams of THC — clearly not enough to be taken seriously in the evidently ultra-competitive field of "Big Fuckin' Brainscrambling Sweets."

"We decided that it would be a pretty cool idea to try to make the biggest infused gummy," Sturdevant explains. "It was really a nice way to give all of our new employees in the medical cannabis industry, and in my kitchen, something fun to do."

To create the gargantuan green gummy, Sturdevant followed the same basic steps he would with smaller gummies, but rather than put them in small individual molds, he dumped everything into one giant one.

"And then I let it sit," Sturdevant says.

The resulting sweet-leaf sweet treat sits on display in Good Day Farm's Columbia facility, which houses both its cultivation and manufacturing arms.

Hilariously, it contains so much THC that it cannot be removed from the building without breaking the law; whoever was in possession of it would immediately be exceeding legal personal limits.

But Sturdevant is laboring on a workaround so Missourians can get a better sense of what it looks like in person.

"We're actually making an undosed version of it too, a replica that we can take out of the building," he explains. "Because, unfortunately, we can't really move this one."

Those smaller edibles, though, have already begun arriving in St. Louis-area dispensaries, with flavors including Sour Apple, Strawberry Lemonade, Watermelon Sugar, Wild Berry and Rise N' Shine. Each package contains ten gummies, with a total of 100 milligrams of THC.

This reporter recently picked up a package of Strawberry Lemonade. The first bite immediately brought forth the sweetness of the strawberry and sugar coating, with the tart lemon flavor coming at the end.

It evoked a summer spent sitting on the porch with glass of cold refreshment as much as it did a candy treat; in fact, these things taste so good I inadvertently took a larger dose than I'd initially intended, mindlessly putting back three ten-milligram gummies on taste alone before realizing my error.

There are far worse mistakes one could make, however. As it turns out, 30 milligrams was the sweet spot (pun intended), and within an hour I was pleasantly zoned out and completely confounded by the passage of time, which no longer seemed to move in a linear fashion.

My limbs felt heavy, my chronic pain delightfully soothed. My only complaint about the experience is that my phone kept updating me on what appeared to be World War 3, which was a bit of a mellow-harsher, but Good Day Farm can hardly be blamed for that.

The company will also begin rolling out flower offerings this week. They'll first appear in Good Day Farm's dedicated dispensaries in Cape Girardeau and Independence before popping up in other shops across the state.

And coming soon is a line of nano-emulsified edibles which are said to be even more fast-acting, thanks to some wacky scientific shit that involves blasting a mixture of cannabis oil and water with sound waves until the former becomes water soluble.

Those will be available in gummy form as well, in the flavors of Strawberry Kiwi, Sour Blue Raspberry and one ominously titled "Night Night."

Sadly, it does not appear that Good Day Farm will be releasing a line of enormous edibles capable of putting God himself into a state of couchlock anytime soon.

But when asked what his advice might be for anyone out there trying to create their own sewer-lid-sized THC gummy, Sturdevant's advice is simple: "Don't overthink it."

"I really overthought the mold idea. In my mind, I was like, 'Alright, we got to get someone to make us good mold. We need to brand them all,'" he says. "But at the end of the day, after talking with my dad, I realized that I could just put it in a big bowl, and that's gonna look like a gummy. So my advice would just be to find a big bowl."