The maybe-originator of St. Louis style pizza has flourished by building relationships with its customers 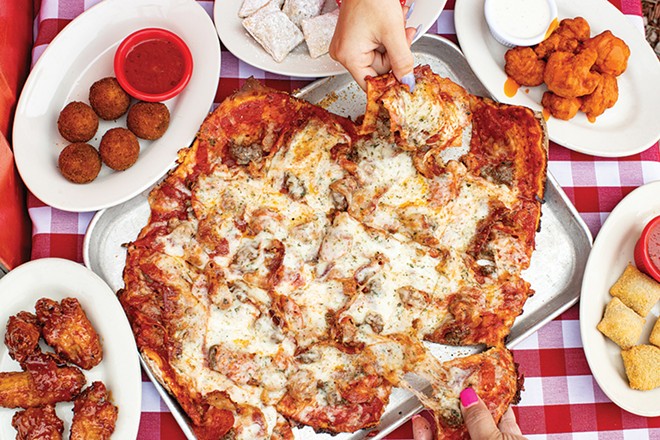 When Tanya Buechel wants to illustrate just how much her restaurant, Monte Bello Pizzeria (3662 Weber Road, 314-638-8861), means to people, she points to one of her longtime customers. The regular, an elderly gentleman, had taken his wife many years ago to Monte Bello for their first date, and the couple made it a tradition to come in every year on their anniversary to celebrate. This year, however, he arrived by himself on their special day.

"This year, his wife passed away," Buechel says. "He told me, 'I'm still coming here for our anniversary to have Monte Bello.' It's so neat that we are that place for him. We've been here for him, and he has all these good memories of the place. That's what it is — you come here, and we treat you like you are part of the family. People really like that, and you don't get that at a lot of places."

Stories like this are as much a part of Monte Bello as its pizza — a phenomenon Buechel has witnessed since she and her husband, Dennis, took over the beloved Lemay restaurant in 2020. However, the Buechels were well versed in the pizzeria's lore long before signing the paperwork to become its owners; in fact, their own history with the place is what prompted them to become its stewards in the first place. A lifelong Lemay resident, Buechel and her family were the kind of multigenerational regulars she now serves every day, and her experiences at the pizzeria were a foundational part of her childhood."Growing up in Lemay, you either went to Cusanelli's or Monte Bello, and my family went to Monte Bello," Buechel says. "There was the jukebox in the back that I always had to play, the cigarette machine, beer and soda in cans. So many customers tell me that they had their first date here 60 years ago or that they came in after prom or championship games. There was a Stoop Brothers behind us, and the guys who worked third shift would come in for beer and pizza when they got off work because we were open super late. It was a happening spot back in the day." 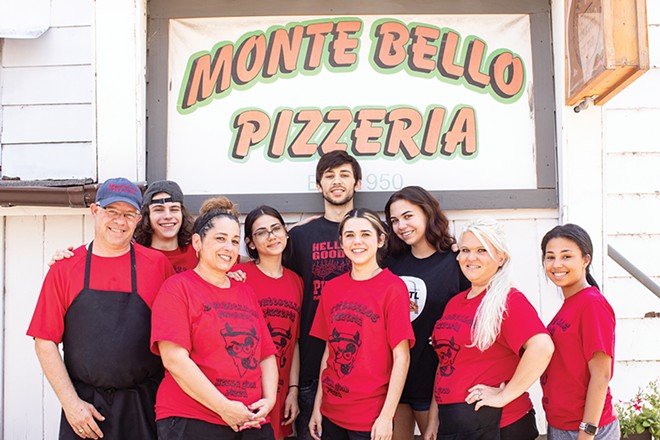 By the time she was an adolescent, Buechel was putting coins in the jukebox and Monte Bello was already firmly established in the hearts of the Lemay community. Founded in 1953 on the spot of an old bar called Buck's Tavern, the pizzeria was the realization of a dream for the Petrillos, a Sicilian immigrant family who owned and operated the place until 1964. When they were ready to get out of the business, the Petrillos sold Monte Bello to husband and wife Ed and Peggy Morgan; as Buechel tells it, the Morgans never divorced but went their separate ways over the course of the years, with Peggy taking on most of the operations in the early 2000s. Around that time, Peggy's son Tommy temporarily closed the restaurant to make repairs and helped his mom run things for several years.

When Tommy got out of the business in 2018, Peggy reached out to Buechel and asked if she would help her manage things. A veteran industry professional and longtime customer, Buechel obliged and quickly became the de facto operator of the place as Peggy grew too old to handle the day-to-day business — even though she didn't let that stop her from pitching in.

"She would come downstairs to cut vegetables, clean floors, clean the bathrooms, always saying that she was so sorry she couldn't help more," Buechel says. "She would sneak up on me because she was so little, but you would know she was here from the smell of Pine-Sol she used to clean. We became really close, and she was like a grandma to me. She'd give me advice on kids, marriage and life in general because she had experience with all of that. She was a sassy lady, and I feel like I didn't have enough time with her." 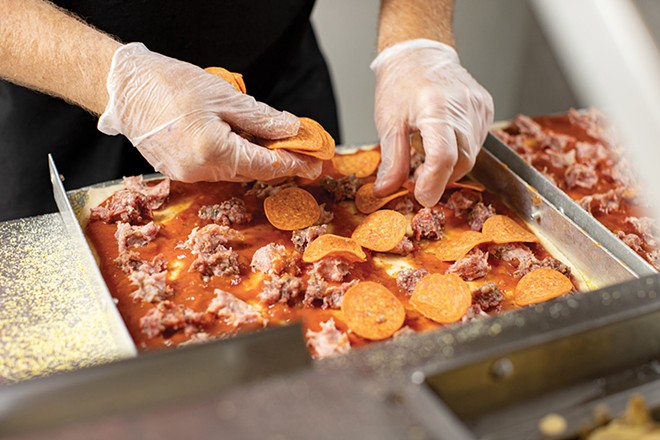 Mabel Suen
The meat lovers pizza gets assembled in the Monte Bello kitchen.

When Peggy passed away in 2020, the Buechels saw that they had a choice: Either take over Monte Bello themselves or watch it close down and become one more St. Louis restaurant memory. The thought of the latter was unbearable to them, so the pair made a decision with their family to buy the restaurant. In April of 2021, they signed the paperwork and became Monte Bello's official owners, determined to carry on the legacy of a place that has meant so much to them over the years.

The Buechels understand their role as stewards of Monte Bello and have fiercely stuck to the restaurant's traditions. They use the same metal deck ovens that have been there for as long as they can remember, the same recipes and even the same pasta board that has been a part of the restaurant since the 1960s — a wooden piece made by a local kid in his shop class that can hold exactly 99 ravioli. The old tablecloths are the same, as are the vintage metal pizza trays; both are out of production and cannot be reordered should something happen to them.

The Buechels know that touches like these are part of Monte Bello's charm, and they try to balance any changes they make with the desire to respect the touches that have come to define the restaurant over the years. Tanya Buechel admits it's sometimes a battle. "We're getting new flooring, and customers say, 'No!'" she laughs. "I tell them that it's actually peeling off. Chunks of tile and cement are coming up when we sweep and mop. Some people hate change, but it needs it. If Monte Bello is going to be here for another 70 years, it has to be taken care of."

One thing that the Buechels will never change is the pizza. Though they cannot confirm it definitively, there are rumblings in the local pizza circuit that Monte Bello may be the birthplace of St. Louis-style pizza. If it wasn't the first, Buechel is pretty sure that it's the oldest St. Louis-style pizzeria still in operation, an interesting tidbit considering one key ingredient that is missing from its pies. 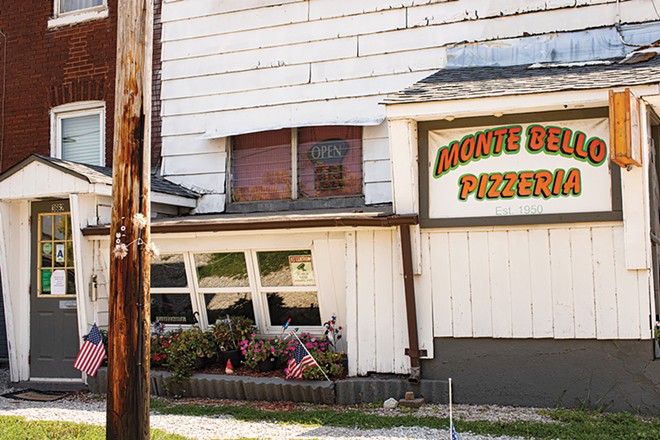 Mabel Suen
Monte Bello is located in a tucked-away, basement storefront in Lemay.

"We have never used Provel and never will," Buechel says. "I like it; I don't have anything against it. This pizza just doesn't need it. If it ain't broke, don't fix it."

A legion of Monte Bello pizza fanatics agree: Recently, the Facebook group Pizza Connoisseurs, a local authority on all things pizza, crowned it the best pizza in the St. Louis metropolitan area. The nod brought fresh business to the restaurant, which the Buechels note has historically been a challenge considering the spot's off-the-beaten-path, basement location. The fresh accolades have been great, but the pair notes that the thing about Monte Bello they are most proud of has nothing to do with the food.

"It's the relationships with customers," Dennis Buechel says. "We get a lot of posts that say the pizza is phenomenal, but the ones I take to heart a little more are the ones that tell us things like, 'The girl who waited on us let my daughter color on the special board.' As much as I enjoy cooking good food, I love coming out and talking to the customers more."

Tanya Buechel concurs. "This place has so many generations that come here," she adds. "People will tell me their mom had their baby shower for them here, and now they bring their own kids. We love it, and we are going to keep doing it until we can't keep doing it anymore. And then, hopefully we will pass it on to our kids so they can continue the tradition and hopefully make the Petrillo family proud that they created a place, and it's still going strong after 100 years."