The Death of Swagg Huncho: Loyalty, Hip-Hop and the North County Nightmare 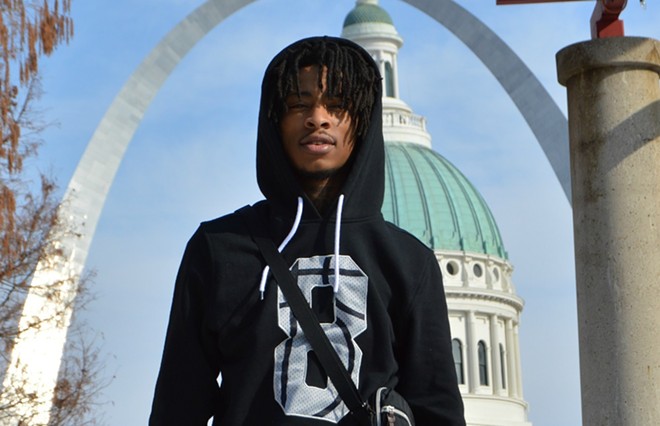 
The Ferguson rapper known as Swagg Huncho was killed on Sunday. He was a member of the group 3 Problems, the most vital hip-hop act in St. Louis. “I was looking for him all yesterday,” his groupmate Lil Tay told me on Monday. “We called all the jails, and we finally called the morgue.”

Swagg’s real name was James Johnson, Jr. He wouldn’t tell me it at first, so deep was his paranoia, the same one that caused him to drive around rental cars, so people wouldn’t recognize him in the streets. He had reason to be fearful. One of his best friends, Eugene Stubblefield, was killed in January, his body dumped at an abandoned loading dock.

Swagg’s murder also comes on the heels of the September killing of City Stylez, another promising local rapper, who was a bit older and a mentor to 3 Problems. City Stylez left behind five kids and a mountain of bills for his mother.

About the only way to escape death for this distressed demographic, it seems, is through prison, where you’ll find the third member of 3 Problems. His name is Terrell “Rello” Brown Jr., and he’s serving ten years for second degree murder.

The Post-Dispatch’s account of Swagg’s death noted he’s “at least the 186th murder in St. Louis so far this year.” These deaths are so common they’re not even statistics, they’re approximate statistics. But there was nothing anonymous about Swagg. He was strikingly attractive, exuding a bad boy charisma, the kind of guy you whose good graces you wanted to be in. He had a star quality, and 3 Problems had real momentum, with hundreds of thousands of YouTube views for many of their videos. Their most recent mixtape, A Problem Story, was more like a polished debut, and made my top five albums of this year. Their follow-up, Free Rello, was scheduled to come out on Swagg’s nineteenth birthday — his golden birthday, in fact, December 19. Hopefully that will still happen.

Swagg wasn’t the great musical talent in 3 Problems – that was Lil Tay, who lived and breathed hip-hop. But Swagg was the leader of the group, the one who guided interviews and helped craft their image. (He also wrote many of their lyrics.) He had lots of fans. People asked him and Lil Tay to take pictures at the Michael Brown protests last year. Girls were after him, as were many others with sketchy intentions, convinced his relative local fame meant he had money and favors to dispense.

Across his right forearm, his tattoo read “Loyalty First,” and he tried to stick with those he knew, both for personal safety and because of his deep love for his friends and family, which often amounted to one and the same. He had two young daughters. His groupmates were his first cousins (their mothers are sisters in their 30s), and Stubblefield’s mom was Swagg’s mother’s best friend.

You can hear my conversation with Swagg and Lil Tay about the departed Stubblefield in the video below. We spoke in February at the loading dock where his body was found. They called Stubblefield a “brother” and, though he wasn’t actually in the group, a “problem,” which was a compliment. Note the tattoos to honor him across their jugulars, and how, at the :30 mark, Swagg breaks out of the conversation and into a profane rhyme, about trust. The compelling yet sinister rap sums him up in a nutshell, hinting both at his talent and his darkness.

But he could be funny and warm too. He invited me to smoke weed shortly after we first met, after we had lunch at the restaurant of his choice. (Hooter’s – I declined). At the Mel Carnahan courthouse downtown for Rello’s sentencing, he slipped his hand up inside a vending machine to steal a bag of Red Hot Riplets for his cousin.

Certainly, he didn’t always live within the law. He was arrested in late October, charged with drug possession and resisting arrest. And he was always very clear to emphasize just how real the group’s songs were. But though the tracks played up the group’s street bona fides and their ruthlessness, they also portrayed a pair of struggling kids trapped in a horrible situation. As their characters explain on “Come Around,” they rob folks not because they get a thrill, but because they’re broke. They slang dope because no one’s hiring.

It was easy to imagine that, with the group’s burgeoning fame, Swagg would be able to transition into an above-board life. After the Rolling Stone story, the guys got some good clips, and were making decent money doing guest verses on tracks from other local rappers. They put on shows, filmed videos, and their fan base was blooming. Their close associate LA4SS was even closer to breaking out, and his success would have only boosted theirs.

But the idea that you can leave your past behind is probably a fantasy. I don’t pretend to know what Swagg was doing late at night, running around the city. And there may be those who knew him as a menace, rather than a target.

But ultimately he’s like those approximately 186 others – a victim. Of poverty, of hopelessness, of a reckless gun control policy, of nobody giving a fuck. He did his best to survive within the system he was born into. Any idiot commenters who believe he got what he deserved (based on his lyrics) should realize that he just wanted what we all want: A little money in his pockets, a little shine. He showed off his guns because he didn’t want to be attacked.

Thankfully he left behind a body of work. With a little exploration, it will tell you not just his story, but help you understand better an entire generation of young black men from North St. Louis County. That’s his legacy, and it’s more than most of us accomplish by our nineteenth birthdays.

As of press time, there have been no arrests made in the killing of Swagg Huncho, nor in the January murder of his friend Eugene Stubblefield.

Ben Westhoff is the author of the books Original Gangstas, Fentanyl, Inc., and Little Brother: Love, Tragedy, and My Search For the Truth.
Scroll to read more Music News & Interviews articles (1)