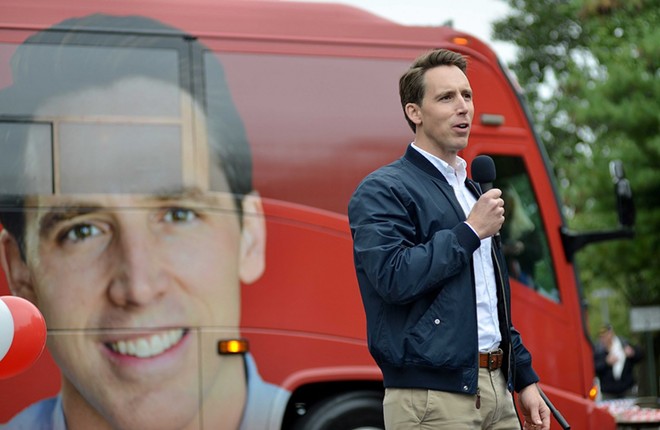 Missouri Senator Josh Hawley is proving that he has been paying close attention to the hustle of the greatest con artist of all time.

That, of course, would be Donald Trump, the worst president in the nation’s history — but also its most accomplished fraudster. History will remember Trump’s diabolical genius in faux championing the cause of millions of working-class Americans he was bred to disdain as a New York City real estate scion.

Now it’s Hawley’s turn. The insurrectionist senator seized upon the Republicans’ disastrous midterm-election results to posture as the leader of a “new GOP that listens to the working people” in an op-ed in the Washington Post, a.k.a. the fake-news media.

Hawley doubled down more recently in standing out as one of just 15 far-right Republican senators to oppose a bipartisan deal brokered by President Joe Biden to avert a national rail workers strike. He proffered the audacious lie that he opposed it for not offering workers enough protection.

How can one be so sure Hawley’s lying? His unbelievably extreme anti-worker record in public disservice rather speaks for itself.

Hawley’s first major political backer was David Humphreys — a Joplin, Missouri, businessman who was far and away the highest-profile advocate of “right to work” laws in Missouri. Humphreys donated a staggering $3 million to Hawley’s 2016 campaign for state attorney general and another $1 million for his successful run to unseat Senator Claire McCaskill.

Hawley of course supported the “right to work” effort that would have torpedoed unions in Missouri by letting people take union jobs without being required to join a union, but still benefit from all collective bargaining agreements. Missouri voters rejected that miserable idea in August 2018 by an overwhelming 2-to-1 margin.

In typical Hawley fashion, he tried to weasel out of his clear position on the losing side, as reported by the Springfield News-Leader. Of course, no one bought that, and months later Hawley was stranded on Loser Island again when Missouri voters gave a landslide victory to Proposition B, which gradually increased the minimum wage by 85 cents a year.

Hawley had argued that Proposition B would raise the minimum wage too quickly and be out of step with other states. Prop B received 250,000 more votes in 2018 than Hawley got in winning his Senate seat.

As senator, Hawley has been prone to cheap talk about raising the minimum wage for employees of billion-dollar companies, nestled in the security blanket of knowing it will never happen for a variety of reasons. But Hawley opposed a minimum wage hike when it mattered. Full stop.

Hawley’s hostility to workers was also on full display in his drive-by tenure as attorney general where he joined a national lawsuit to oppose Obamacare’s coverage for pre-existing conditions. He doesn’t reminisce publicly about that one, either.

In the first three years as a senator, Hawley compiled a lifetime 11 percent voting record as scored by the AFL-CIO. That makes him one of the 10 least labor-friendly Republican senators out of the 50 serving in the past session.

That’s a credential that will serve Hawley well in the fundraising arena as he makes the case to wealthy Republican donors that all his cheap talk about cracking down on Big Business is a charade for the cameras. They know this.

It’s also clear to traditional Republican big hitters that Hawley was just joshing in that Washington Post op-ed. Here was a passage from the senator’s submission for the 2022 Forked Tongue Awards:

“Right now, the Republican Party stands at a crossroads. Its leaders can, of course, attempt to resurrect the dead consensus of offshoring, amnesties and ‘free trade.’ That’s the path to further losses. A reborn Republican Party must look very different. It must offer good jobs and good lives, not just higher stock prices for Wall Street. And it must place working Americans at its heart and take them as they are, rather than treating them as resources to be exploited or engineered away.”

Oh please. Anyone who doesn’t detect a pungent odor emanating from that shovelful of words also will buy into the comical notion that fighting for workers’ sick leave is one of Hawley’s dearest passions. Or that free trade is terrible for the American public, which it most certainly is not.

The only thing Hawley has done to support sick leave for workers is to advocate policies that are certain to make them sick. Remember when Hawley stood up for Medicaid expansion in Missouri? I didn’t think you did.

There’s only one plausible explanation for Hawley’s vote to oppose the rail workers settlement: A rail strike would have been disastrous for the national economy – and thus for Biden politically. Say what we all will about the moral decay of the Republican Party, at least more than two-thirds of them weren’t willing to go that far.

And that’s what Hawley wants: To appear to stand apart from his Republican colleagues as a faux populist just as Trump did from the moment he descended the escalator in 2015 in his felonious company’s gold-plated monument to greed, corruption and avarice.

Like Trump, Hawley is fraudulent to the core. Just as no working-class member of the Trump base can ever be a luxury-class member of Mar-a-Lago, Hawley prefers to interact with the base by viewing it from a comfortable distance.

Hawley demonstrated that in the lead-up to January 6, 2021, when he became the first senator to announce he would provide a dance partner to rabid House members hoping to challenge the results of the 2020 presidential election. No other member of the Senate — not even Ted Cruz — could hope to match Hawley’s credentials as an enemy of democracy on that day of infamy.

That, of course, was underscored by the ultimate metaphor of our time: Hawley raising a clenched fist to the mob poised to storm the Capitol only to scurry like a terrified chipmunk hours later when the unwashed masses menaced his safety.

Hawley was the same guy that day as he has been since the onset of his toxic political career: A self-described “native of small-town Lexington, Missouri, in rural Lafayette County” who just happened to leave out the parts about being the wealthy son of a banker who attended the finest private schools all the way through his Ivy League pedigree.

This guy is as phony as it gets. Hawley’s a man of the working people, all right, providing that his interactions with them can happen mostly from a distance. Preferably behind glass.

And with a safe space to scamper to in an emergency.