Jon Hamm and Paul Rudd Used to Fight Over an Actress From St. Louis

She must be the luckiest woman alive 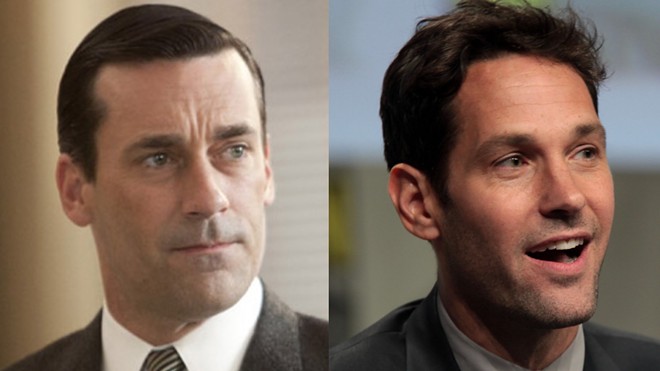 Sarah Clarke must be the luckiest lady to ever live in St. Louis because at one point she had Paul Rudd and Jon Hamm fighting over her.

The 24 actress went to John Burroughs School in Ladue and attended the prom with Jon Hamm as her date. According to her brother, Preston Clarke, Hamm was always hanging out at the Clarke family house, too. But when Sarah met Preston’s roommate at the University of Kansas, Paul Rudd, it was clear that there were substantial sparks between them.

Then when Preston invited Rudd to his home, it set up a showdown with both men trying to prove their worth during a game of Trivial Pursuit.

Rudd recalled the incident in 2014 in Vanity Fair magazine:


“He seemed like he was a good-looking, athletic guy who possessed qualities I did not possess. We were playing Trivial Pursuit in teams. Sarah and I were on one team and Jon and Preston were on the other team. Jon would want to go right to Yellow, which was History, and I was like, ‘Oh, great, this guy is smart, too.’ They would ask a question like ‘What is the largest lake in Africa?,’ and Jon immediately went, ‘Lake Victoria.’ I felt so emasculated in the game that, as a result, I started reading atlases.”


Rudd eventually won Sarah’s affections and they dated for a bit in Los Angeles, where they’d both moved to buoy their acting careers.

But Jon Hamm has no lasting beef with Rudd over getting the girl. Hamm was a guest on the Howard Stern Show just a few months ago, and he had nothing but nice things to say about his friend of 30 years, crediting Rudd with helping him gain footing in Los Angeles.

Hamm was inspired seeing Rudd get the part of dreamy Josh Lucas in Clueless and was eager to follow in his steps, so he made the jump from St. Louis to Los Angeles. On Stern, Hamm even recalls a time when he and Joe Buck showed up at a bar mitzvah that Rudd was DJing to take him out partying.

Check it out below.