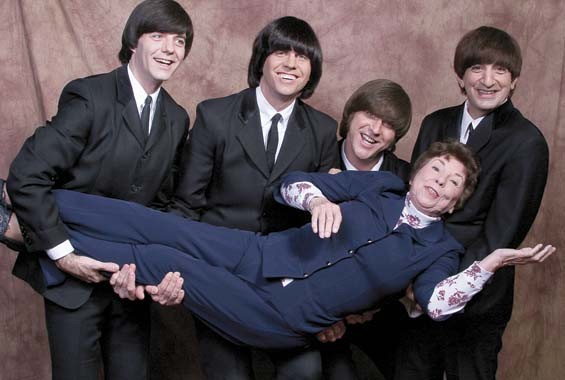 Getting onstage with the Four Vests wasn't Harrison's only public exposure during his two weeks in Benton. Marcia Schafer Raubach was a senior in high school and host of the Saturday Session show on WFRX (1300 AM) in West Frankfort where her father was station manager.

Thanks to Louise's Beatle pushing, Raubach — who played hits of the day from Elvis to Sinatra to early Motown — landed a small spot in Beatles history.

"She walked in the station one day," Raubach recalls of her introduction to Louise. "I didn't really think a whole lot about it. This gal was the sister of someone in England. She said he was in the biggest group in England, but we'd never heard of them, so I was not really impressed. But I did take the record. She gave me 'From Me to You.'"

Raubach began airing the single that summer, making her arguably the first DJ in the country to spin the Beatles.

"She told me that George was coming to the States in September, and he'd like to meet me," says Raubach, "so that's when she brought him to the station." Clad in a white shirt, jeans and sandals minus socks, future ladykiller Harrison impressed the teenager. Sort of.

"He didn't look like the guys here," she recalls. "The boys over here had the DA's and the turned-up collars and smoked cigarettes; that wasn't George. He was very clean cut and very polite. I think George became better looking as he got older, as he matured. But he was a cute little guy." Her live interview with the Beatle was not recorded and only a few minutes long. Of that, Raubach says, "he didn't want to talk about himself, he wanted to talk about the band."

During his last week in Benton, Gabe McCarty took Harrison a half hour down I-57 to Fenton Music Store in Mt. Vernon, Illinois, where Red Fenton sold him a red Rickenbacker guitar, model 420. George wanted it black to match Lennon's guitar, so Fenton had it painted.

"I couldn't believe he wanted to do that," says McCarty, still chagrined. "It was a beautiful guitar."

And then George Harrison left town, never to return. In February of the next year, when the Beatles became the Beatles in the States, Louise traveled to New York to see the group on The Ed Sullivan Show. She met the rest of the band for the first time — "I just felt I had three more brothers" — and found herself tending to an ill George.

"He'd invited me to come up and spend the time with him, and then it turned out he had a strep throat and a 104-degree temperature when I got there," she recalls. During the band's historic performance, when 73 million Americans watched on television and 700 lucky audience members went berserk, there was one person who was not slack-jawed or screaming, one person who had other concerns.

"I spent most of my time sitting there trying to will my energy into my brother to make sure he could keep standing up through the show," explains Harrison. "That was my entire consciousness, trying to connect his energy with mine. His temperature was still 102."

But surely she must have felt something extraordinary at this life-changing moment, this defining night in social history, witnessing her kid brother's rise from the streets of Liverpool to the glorious heights of the Sullivan stage?

"I'm British," Harrison replies. "We don't get excited. We just stay calm and carry on." 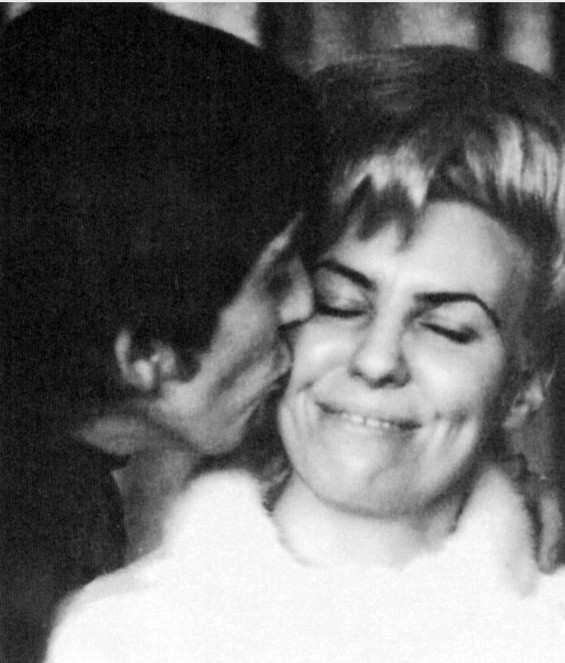 Courtesy Acclaim Press
George and Louise backstage at The Ed Sullivan Show in 1963.

Since that night 51 years ago at the Ed Sullivan Theater, Louise Harrison has indeed carried on. It hasn't always been easy, as she details in her new book. Divorced, she moved to Florida in 1970 to pursue her interest in environmental issues, starting a nonprofit and various related projects that evaporated due to funding problems. She remarried and divorced again. By the early '90s, she was living a few miles from Benton in rural Franklin County — surviving largely on a monthly $2,000 stipend from her brother granted in 1980 — when plans were announced to demolish her onetime home on McCann Street, the place where an actual Beatle once rested his head, to create a parking lot. Local friends of Harrison rallied successfully to preserve the site of the virtually unknown Beatle visit, ultimately launching the Hard Day's Nite Bed & Breakfast.

"I was roped in to try and promote the bed and breakfast," Harrison says warily. "People magazine did an article and wrote that it was Louise Harrison's bed and breakfast, and it never was my B&B. The last thing I want to be doing is changing people's bed linens."

News of the project reached George, who allegedly was not happy about it, creating a rift that lasted until a deathbed reconciliation.

Harrison says she wasn't aware of the problem, and says she had trouble reaching her brother.

"Earlier on he used to call me when he changed [his phone number], but during his second marriage, he stopped calling to give me his latest number. I don't really remember...all I can say really is I never tried to exploit the Beatles."

And that two grand a month? It was stopped a year after her brother died of cancer in 2001.

"After I'd been married twice and both husbands had problems with alcohol, my brother said to me, 'Don't go getting married again. There's no reason, given my circumstances, that my sister should have any kind of hardship.' He agreed to give me a $2,000 a month pension. After he died, that was canceled," Harrison says.

As to why, it's a she-said-she-said mystery.

"Louise was good friends with George's first wife, and when he married his second wife...she and Louise basically hate each other," offers Marty "Beatle George" Scott. "That's about all I know. I think it's a woman thing."

"I have enough abilities that I can earn a living," states Harrison, who was left out of her multimillionaire brother's will, "so don't worry about that. Obviously somebody needed the $2,000 a month more than I did. It's only money. As far as I'm concerned, I'm wealthy, because I have really good friends."

These days Harrison's earning abilities stem from managing Liverpool Legends, the tribute band that brought her to Branson. The partnership began after a Fab Four-related encounter with Scott.

"I was performing at a Beatles convention with my old band in Chicago, and she was a guest speaker," he explains. "I'm the George guy, and of course I'm freaking out when I heard she was there. I was like, 'Oh, man. George's sister. I hope I don't suck!'"

The pair hit it off and decided to put together "something really special," Scott continues. "There's a lot of Beatles bands out there, some good ones and not-so-good ones."

On the Beatles tribute circuit, Liverpool Legends is reportedly a very good one, and certainly the only one sanctioned by a member of the Beatles family.

"The first year we started the band we toured all over the place," says Harrison. "Then someone called and asked if we'd do a few gigs in Branson, and then a theater owner asked if we wanted to play from January to December or something, and that's a lot easier than touring."

Harrison takes the stage for Q&A sessions and narrates video segments during shows. "The economy has gotten worse, so last year we had to rent the theater ourselves."

Her role as manager is nontraditional, explains Scott.

"Honestly, she's not really a manager per se, she's never really been a business manager, but Louise helped me from day one with pretty much everything. She's a media person. What she's done since the early '60s is deal with the press. With us she's been very hands-on, she's helped us load the truck at times. She'll get done with a TV interview, and she'll be sewing the buttons on our jackets."

A theme in Louise Harrison's life seems to be helping others. A few years ago she and the band initiated Help Keep Music Alive, "a nonprofit program where we go to schools and give a free concert, and have the school's bands and choirs play with us," Harrison explains. "I promote the show and hopefully sell an auditorium full of tickets, and then give a nice chunk of money to the music departments."

"We've been trying to get more funding, and it's growing," says Scott. "We have people on the West Coast who were interested in helping, so Louise is out there networking."

"She's always been in a totally unique position," says Scott, who remains impressed by Harrison's vigor after all these years. "She's hanging out with a bunch of rock & rollers. She probably should be home knitting sweaters or something, but she'd rather be going to gigs."

One wonders, though: Can the Midwest expect its Beatles connection to return to the region she's called home all these years? Don't rule it out entirely. Says Harrison of her recent move to Southern California: "It's as permanent as anything can be when you're 83."