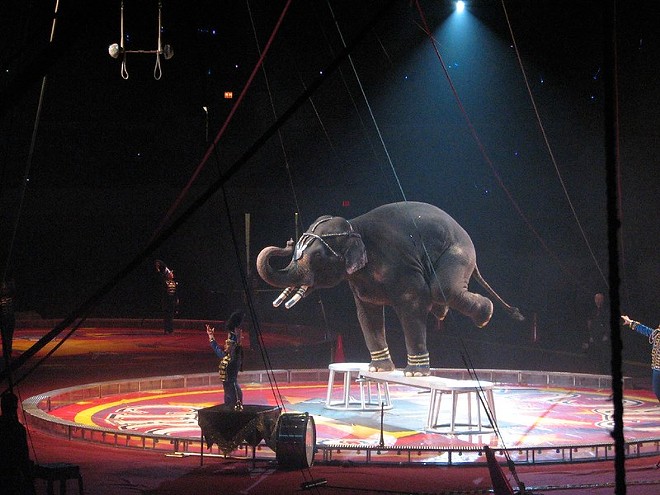 FLICKR/KURT MAGOON
An elephant performs in a Shriners circus in 2007.
When the circus comes to town this March, it will be minus a longstanding attraction — the elephants.

The 81-year-old St. Louis-based Moolah Shrine Circus announced yesterday that it has decided to no longer use elephants, a decision that follows two months of targeted protests. Most recently, two protesters affiliated with PETA were arrested on December 21 after briefly interrupting a Shriners meeting at their headquarters in unincorporated St. Louis County.

In a statement posted to Facebook, the Shrine Circus said the decision had been "five years in the making."

"Over the last several years we have retired our tigers, lions and bears," the statement continued. "The new year offers an all-new and exciting entertainment of performers."


PETA took credit for the decision in a statement of its own. The animal rights organization has protested the use of elephants in circuses for years, and in recent years has found major success as circuses around the country have halted their use.

In November the organization began focusing on the Moolah Shriner Circus, and things escalated a month later when some Shriners detained two protesters at their meeting and held them until police arrived. The protesters said last month they would sue over what they characterized as assault.

"It took appeals from more than 60,000 PETA supporters and the bravery of peaceful protesters — who were assaulted by aggressive Shriners — but PETA is celebrating the news today that the Moolah Shrine Circus is finally giving up its elephant acts," said PETA Executive Vice President Tracy Reiman. "Let this be a lesson to every other holdout Shrine that it’s time to stop fist-fighting the future and start switching to animal-free circuses that dazzle audiences with human talent."

PETA has linked the Moolah Shriners' pachyderms to the Oklahoma-based Endangered Ark Foundation, operated by Carson & Barnes Circus. Its statement said that circus was "cited for more than 100 violations of the federal Animal Welfare Act" and that its head trainer was caught on video beating elephants.

PETA's complaints haven't been the only time the Shriners' elephants made headlines. In 2010, three of the star performers apparently got spooked by crowds at St. Charles' Family Arena and made a break for the parking lot, damaging cars and trailers.

The Moolah Shrine Circus returns to the Family Arena on March 26.