The St. Louis native will headline a show at Stifel Theatre on New Year's Eve 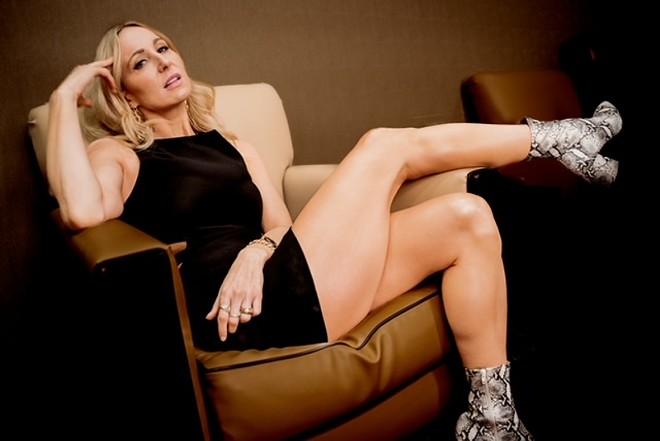 St. Louis native Nikki Glaser is still buzzing from the night before. Not from booze — the 38-year-old comedian quit drinking 10 years ago. Not even from the previous night's sold-out show in Atlantic City, part of Glaser's The Good Girl Tour, which she describes as the best tour of her career. No, Glaser's nerve endings are still smoldering because she just met Jerry Seinfeld for the first time. The two happened to be performing in separate showrooms at the same Atlantic City casino, after which the comedy legend summoned Glaser to his dressing room.

Gearing herself up to tell Seinfeld, one of her all-time heroes, how much he means to her, Glaser was flabbergasted when he gushed over her instead.

"It turns out he's a huge fan!" she tells the RFT on a phone call from her New York City hotel room. "I was, like, 'Are you doing an impression of the things that I was planning to say to you!?' I was very shocked that he was even familiar with me, let alone a fan. It was awesome. It was one of the best moments of my career, and it just happened last night."

Seinfeld's praise was especially important to Glaser as someone who, despite considerable success and fame, still struggles with feelings of insecurity as a performer.

"I'm someone who always doubts myself a lot and always has imposter syndrome. I constantly question my talent," she says. "But I'm not allowed to anymore because Jerry Seinfeld told me I was talented, and I really believe him, and he had evidence for it, and I will never forget the things that he said to me last night, and you can't question Jerry Seinfeld." 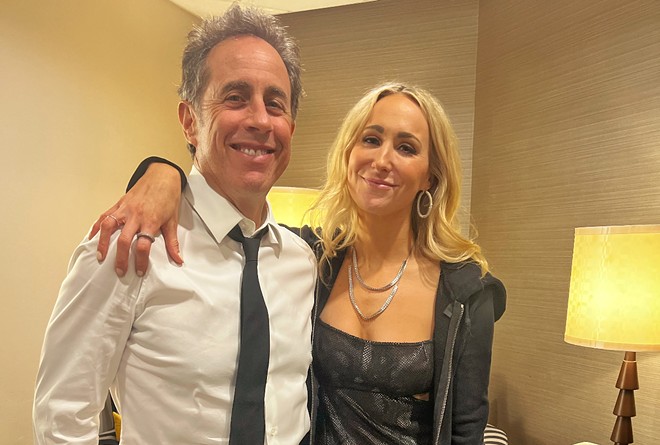 COURTESY PHOTO
Even Jerry Seinfeld counts himself as a Nikki Glaser fan.

Such a bullet-train sentence of rapid-fire clauses is typical of Glaser, who continually demonstrates a head-spinning capacity for sizzling verbal runs that manage to be simultaneously funny, insightful and soul-baring. It's this racing, high-voltage cognition that often has Glaser stuck in a continual cycle of fraught self-evaluation but which also makes her one of the funniest and most talented comics of her generation. Her last few years have seen a surge of successes: well-received Netflix and HBO standup specials, sold-out shows across the country, a highly popular podcast, a hosting role on HBO's reality dating show Fboy Island, brutally hilarious celebrity-roast takedowns, a Carpool Karaoke episode with her favorite band Wilco, and on-air guest appearances that have made her a favorite of everyone from Howard Stern to Conan O'Brien.

Next on the list is an event Glaser expects to be another career pinnacle: her upcoming New Year's Eve performance at Stifel Theatre, her biggest-ever headlining show.

"It's a fucking honor!" she says. "I mean, I was happy with just the Pageant! That was the goal forever. So to be at this level — it's above and beyond. I'm so excited to play that beautiful theater."

Moreover, for the first time in many years, Glaser does not have to travel to play a homecoming show. After several years in New York and LA, Glaser moved back in with her parents in Kirkwood when COVID-19 wiped out live performances.

"I need to be around people, or I get lonely and depressed," she says. "When the lockdowns happened I couldn't do standup every night, and I needed people to be around, so I moved in with my parents."

Glaser credits the slower pace of life back home with saving her from a work-induced breakdown.

"In the past eight or so years, as I've gotten more famous, more work has come in, and I can't say no, so I was working all day and still doing standup at night," she says. "So right before the pandemic, I was on the edge of serious burnout. I was kind of going insane."

After a few months back in Kirkwood, Glaser grew reacquainted with a lifestyle that had comforts and benefits she had mostly forgotten. "I was, like, this is a sweet life! You just eat dinner and watch TV and go to bed," she says. "I hadn't had that life since high school." As a result, Glaser stayed even after the lockdown was lifted, traveling out of town for gigs but making St. Louis her permanent home.

Asked about the attention she gets around town as a celebrity living in St. Louis, Glaser insists that she rarely gets recognized and is shocked whenever she does. She recently attended her high school reunion (Kirkwood High School, Class of 2002) and reports that her old classmates did not seem all that impressed with her, which she thinks is how it should be.

"The truth is — celebrity is dumb," she says. "It's an empty pursuit. It doesn't actually bring you happiness. So I think St. Louis has it right."

At the same time, Glaser remains full of internal contradictions, admitting that she herself is easily dazzled by famous people. She says, "I still get starstruck to this day. I mean, if I saw Becky, Queen of Carpet, I would freak out."

After a year living in her childhood bedroom, Glaser moved to her current apartment in the Central West End, where she enjoys a routine of walking her dog, getting coffee, running in Forest Park, meditating, playing her guitar and recording The Nikki Glaser Podcast once a week. It's a pace and state of normalcy that Glaser is reveling in.

"I watch the sunset or play Frisbee in the park with my boyfriend," she says. "We go to yoga, and then we go out to dinner and then we watch White Lotus. It's awesome."

"For whatever reason, I feel free to say whatever I want on stage, even more so than in a therapist's office," she says. "There is just something about an audience in the dark and having a microphone. I am more honest than I could ever be anywhere else."

When asked about performing explicit material in front of her own parents, she says the shock for them wore off long ago.

"Oh my God, they have grown calluses over their ears at this point from all the things I've said," she jokes. "They're used to it. And my boyfriend's dad has heard everything I could possibly say about what his son and I have allegedly done."

And yet Glaser does admit to anxieties about playing St. Louis — particularly the possibility of running into someone afterward and sensing that they didn't like the show, anxieties that she traces back to feelings she had 20 years ago in high school.

"My biggest fear is, like, some pretty girl from MICDS saying, 'That was gross. You grossed us out,'" she says. "It's like being in St. Louis makes me feel like I'm in high school again. Like, am I cool? Do people like me? I want to be accepted."

Despite loving high school in general, Glaser recalls years of falling short of her desire to be exceptional. She tried swimming and field hockey ("I quit because I had bad shin splints. Also, I sucked," she remembers), had no success with boys and failed to get leading roles in school plays.

"I would audition for The Diary of Anne Frank, and I would get Jewish Townsperson B," she says. "I wanted the lead, and I wouldn't even get close. It was pretty demoralizing."

Then during her senior year, Glaser was cast in The Musical Comedy Murders of 1940 as Bernice, an uproarious, perpetually drunk character. "I just kind of played her as Karen on Will and Grace or as my mom on New Year's Eve," she laughs. Her drama teacher heaped praise on her performance, which she describes as a turning point — the first time she felt truly good at something.

Fast-forward to 2022, and the girl who was too scared to dance at Webster-Kirkwood Friendship Dances is about to pack the 3,100-seat Stifel Theatre for an adoring crowd on New Year's Eve.

And what if the old self doubts try to creep up?

"It's different now," she says. "Because I will have Jerry Seinfeld in my head saying, 'You've got it, Nikki. You've got it.'" 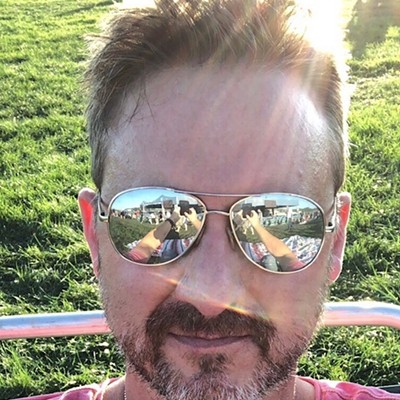 Steve Leftridge is The Midnight Backslider. Therefore, he is a writer, emcee and musician. He lives in Webster Groves where he teaches high schoolers and lives with his two kids and spouse-equivalent.
Read More about Steve Leftridge
Scroll to read more Arts Stories & Interviews articles (1)