Not everyone gets the joke at first, admits Patrick Connolly, the executive chef of Basso (7036 Clayton Avenue; 314-932-7820), the new gastropub inside the renovated Cheshire hotel. The "Emo Cover Band" is just another of the pizzas on the restaurant's menu -- the last one listed, in fact, after the classic margherita, the cheese-laden "Stretch Armstrong" (buffalo mozzarella and strecchino), the over-the-top "Donald" (duck egg, truffle butter, shaved lardo).

Then the diner says the name of the pizza out loud. Or she reads over the ingredients: sausage, cippolini onions, pancetta, mushrooms, poblano chiles and...something called "Basso Provel"?

Commence the chuckling and slapping of foreheads. "Emo Cover Band" -- as in a tribute to St. Louis' very own Imo's Pizza. 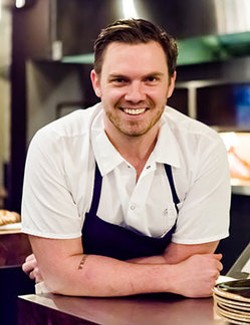 A St. Louis native, Connolly made his bones as a young cook at Tucker's Place and Dressel's before attending Johnson & Wales University in Providence, Rhode Island. From there, he went to Boston, where his career took off: His work at the restaurant Radius earned him national acclaim, including a nomination for the James Beard Foundation's "Rising Star Chef" award in 2007 and a win for the foundation's "Best Chef: Northeast" award in 2008. He then moved to New York City, where he helmed the kitchen at bobo and The Kitchen NYC.

Still, Connolly never lost his taste for one of the signature dishes of his hometown.

He would purchase pre-made cracker-thin pizza crusts and ropes of Provel cheese from groceries on the Hill to bring back East and prepare for co-workers.