At Lona's Lil Eats, Huge Flavor From a Tiny Village in China: Review 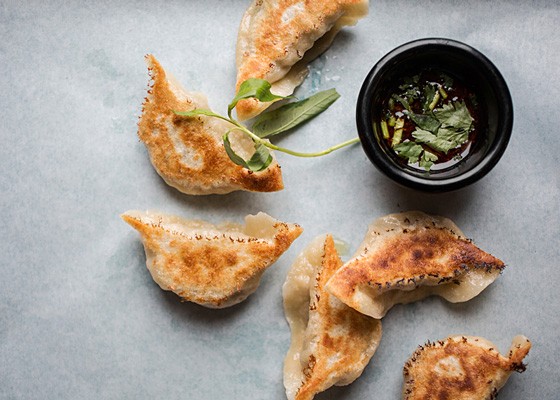 Lona Luo is from a small village in a remote corner of southwestern China. It's where she was born, raised and learned to cook — but she's not Chinese. Her mother is Thai, her father is from a small tribe called the Luo Luo, and she is the first in her immediate family to learn to read and write. Luo and her husband, Pierce Powers, call their cuisine "Asian comfort" or "hill tribe" food, but St. Louisans will soon refer to it this way: some of the best food in town.

Luo met Powers in 1999 when he moved to her village to teach English. The two married, had a daughter, and came back to St. Louis to open a small import business at Soulard Market that sold silks and bags from Luo's hometown. When a food stall became available, the couple decided to sell Luo's handmade dumplings as well. The stall became so successful that the imports fell to the wayside, and the focus became the food. It took two years, but in September, the pair finally opened a brick-and-mortar restaurant on California Avenue in the up-and-coming Fox Park neighborhood.

I have never tasted the combination of flavors presented at Lona's Lil Eats, and after speaking with the couple, I understand why. Not only is Luo's cuisine unique because of her diverse background (her cooking takes cues from Vietnam and Thailand, as well as China), she learned to cook in a professional kitchen at a high-end Japanese restaurant. She also imports most of her spices from her village. The peppercorns are sourced from a bush near her family home and have a unique terroir because of the village's microclimate. A basil-like herb called yao-yam is sent via special delivery as well. Talking to the Luo and Powers during my visits, I felt more like a culinary anthropologist than simply a diner.

Luo made a name for herself with her handmade dumplings and it's obvious why. The pillow-soft dough is filled with a pungent and umami-triggering combination of peppery beef, smoked mushrooms, onions and housemade pickles, then fried on one side to a crisp golden brown. The accompanying chile-sesame vinaigrette is surprisingly multi-layered — there's smoke, tang and earthiness.

The spring rolls, made with a choice of either chicken, beef or vegetables, are then stuffed with cabbage, cilantro and yao-yam (the taste is somewhere between basil and mint). "Rice" noodles also comprise the filling, though they had a crisper texture because they are actually made from a root similar to taro. The peanut, lime and ginger dipping sauce was at once bright and rich.

The only complaint I had while dining at Lona's Lil Eats is the confusing main-course menu (something Powers admits and is in the process of changing). It's modeled after a fast-casual Mexican restaurant. Patrons select a dish style (giant rice paper wrap, tortilla or plate), a protein (chicken, beef, turkey, shrimp or tofu), a staple (steamed or fried rice noodles, steamed or fried rice), sauce and a side dish. Additionally, Luo and Powers compiled a list of suggested preparations. It can get a bit overwhelming, though whatever ends up on one's plate is bound to be excellent.

I ordered the recommended barbecued beef and tofu combination, served with jasmine rice in the giant rice paper wrap. The sticky wrap could barely contain its contents. The beef — marinated, grilled and thinly sliced — has a slight hint of char that complemented the smoked vinaigrette, while the spicy tofu gave the dish a creamy texture and heat. The rice soaked up the juices from all of the components like a sponge.

Another suggested preparation paired sliced grilled chicken bundled with jasmine rice in a flour tortilla. The highlight of the wrap was the fish-sauce-laced lemongrass pesto that had an indescribable punch — the complexity of the flavors reminded me of pairing deliciously stinky blue cheese with a Sauterne.

On one of my visits, Lona came out to personally recommend the pulled chicken with the same house-made pickles from her dumplings. It's a specialty of her village, she explained, where preserving vegetables is a big part of the culinary culture. Served over the fragrant jasmine rice, the moist, slow-cooked chicken was mixed with chunks of pickled cucumbers and tasted unlike anything I've ever had. The floral lemongrass and spices perfumed the brine, and was something like a cross between Korean kimchi and Indian spices.

Lona's Special: House-made pickles that ferment for two months, chicken, and jasmine rice with a side of sauteed broccoli. | Jennifer Silverberg

For first-time visitors to Lona's Lil Eats, I suggest the "Five Star" combination platter, which basically covers the majority of the menu options. Barbecue beef, chicken, tender shrimp and chile-flecked tofu are served with a cornucopia of sides and sauces. I opted for the stir-fried multigrain rice; stir-fried rice noodles; pungent, fire-roasted eggplant; and a cool and spicy cucumber salad. One of the platter's highlights is that it allows diners to sample all of Lona's sauces.

In addition to the lemongrass pesto and smoked vinaigrette, the "Lona-Q" and spicy sesame sauce add complex depth of flavor everywhere they are applied (with the proteins, mixed in the rice, or served in a shot glass). The "Lona-Q" is Luo's take on teriyaki — sticky sweet but balanced with pepper and garlic. The spicy sesame may be my favorite. With a consistency like pesto, the sauce marries a sesame-oil base with crushed peppers — Luo smokes them with fruit peels so they take on sweet, fragrant notes.

Lona's Lil Eats lit up my palate with layers of flavors that kept revealing themselves even after I left the restaurant. She may call her cooking "Lil Eats," but it's the biggest taste I've had in years.