Everything Is Not Enough: The Place Beyond the Pines is a stab at a masterpiece 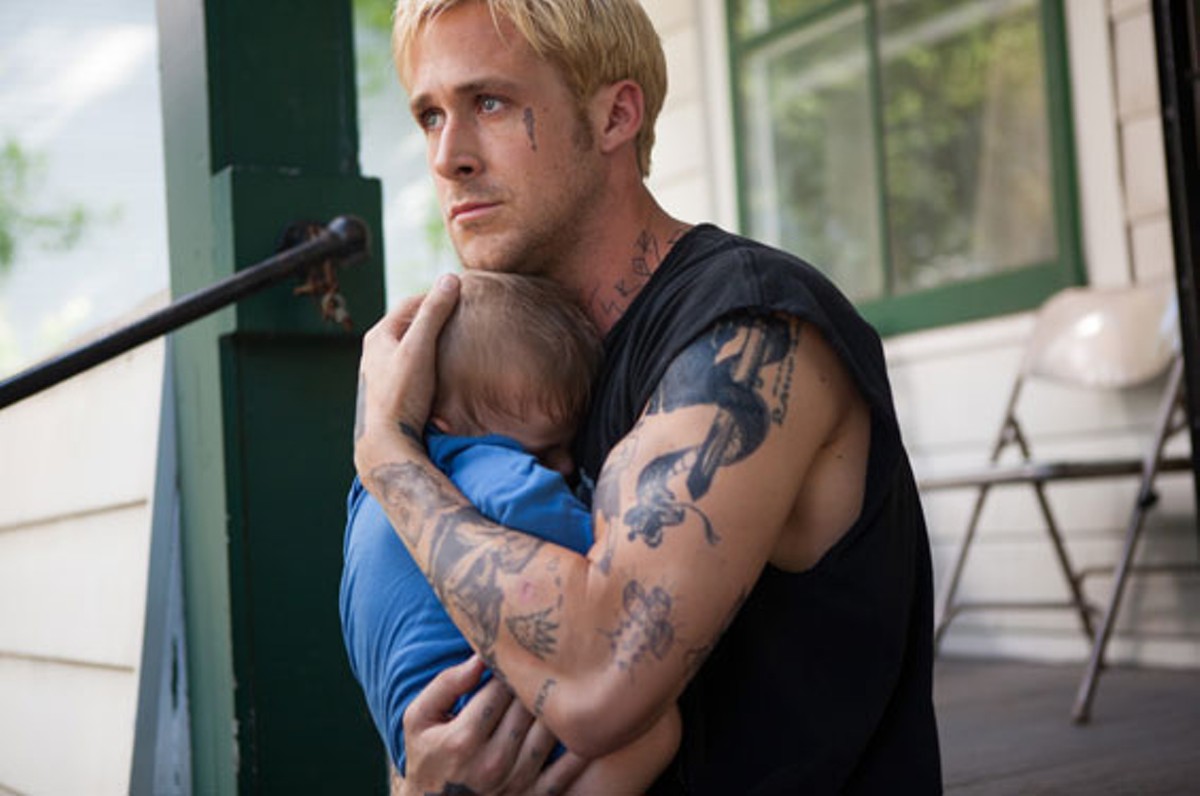 Everything Is Not Enough: The Place Beyond the Pines is a stab at a masterpiece

The Place Beyond the Pines opens with a close-up of Ryan Gosling's chiseled abdomen — surely one of the more salable quantities in movies today — and heavy breathing on the soundtrack (or was that just the person next to me in the screening room?) Then in a single, five-minute tracking shot, we follow Gosling's character, Luke, across a fairground and into the tent where Luke and two other stunt motorcycle performers ride their bikes into a large sphere known (per the press notes) as the "globe of death." Around they go, defying gravity and mortality — and, one assumes, proving something to themselves. It's a pretty apt metaphor for most of what follows in this tortured study of masculine ethos across the generations, of failed fathers and the sons doomed to become them — all circling about in one big, existential steel cage.

If that sounds heavy-handed, well yes, it is, though it's one of the fascinating and frustrating things about The Place Beyond the Pines that you can't always tell if the testosterone-amped Sturm und Drang is meant sincerely or as a deadpan deflating of testosterone-amped Sturm und Drang. Certainly, Gosling's character verges on parody: Decked out in cutoff heavy metal T-shirts, with peroxide blond dye job and a heavily tattooed body, he suggests a trailer-park Prince Valiant, a pubescent fantasy of toughness. And when Luke speaks, Gosling uses a soft, wounded half-whisper that tells us this is all some kind of put-on, that this brooding hulk just wants to be loved. It's a close variation on the role Gosling played to stronger effect in Nicolas Winding Refn's existential Hollywood thriller, Drive, where it was clear the character was meant to be an abstraction (hell, he didn't even have a name). Here, the setting is the more pragmatic, working-class town of Schenectady, and the director is Derek Cianfrance, who previously collaborated with Gosling on another portrait of male ego: the marital drama Blue Valentine.

What is it about this particular stretch of upstate New York that inspires such feverish overreaching in filmmakers? Just a few years ago, Charlie Kaufman made it the locus of Synecdoche, New York, his brilliant but bloated portrait of the artist as a middle-aged head case, and now Cianfrance has made a similarly epic (140 minutes), go-for-broke, everything-I-ever-wanted-to-put-into-a-movie movie. It seems to have been conceived (by Cianfrance and his co-screenwriters, Ben Coccio and Darius Marder) in a dazed rush, after marathon readings of Aeschylus, Hemingway, and Larry Brown. Sure to inspire indifference and cultish admiration in nearly equal measure, this extravagant mess may someday be reevaluated as a misunderstood masterpiece.

Luke's story is but one of three that Cianfrance sets out to tell — not overlapping à la Babel and Crash, but rather laid out end-to-end, like links in an infernal cosmic chain. Reeling from the discovery that a casual fling with a waitress (Eva Mendes, one of the film's mostly expendable women) has resulted in an infant son, Luke decides to quit the carny circuit and, with a little prompting from a local mechanic (Animal Kingdom's Ben Mendelsohn), takes up the more lucrative profession of armed robbery. Their m.o. consists of Luke knocking over banks, speeding away from the scene on his bike and right into the back of Mendelsohn's waiting cargo truck. But when Luke starts to get a little too daring for his own good, his partner blanches, warning, "If you ride like lightning, you're gonna crash like thunder" — a line that sounds like it was salvaged from the floor of the Talladega Nights writers room.

Luke does crash, figuratively speaking, in to rookie cop Avery Cross (Bradley Cooper), who's clearly working on his own set of self-identification and daddy issues. Avery is a father, too, of a boy roughly the same age as Luke's, and if you think that bit of plotting won't eventually be milked for its full Jacobean portent, you'd best leave before the movie reaches Act Three: "15 Years Later." In the meantime, Cooper effectively takes over the picture, as the mood shifts from brooding romantic melodrama to terse police procedural in the key of Sidney Lumet. Cooper's terrific, too, oozing raw charisma and callow self-interest, a dangerous combination in a precinct rife with dirty cops (including a detective named Deluca played by with snarling menace by Ray Liotta, whose dirtiness is actually supposed to come as a surprise).

A graduate of the University of Colorado film school, where he studied with avant-garde masters Stan Brakhage and Phil Solomon, Cianfrance is a gifted stylist with a penchant for the mythic (even Blue Valentine, his most strictly realistic work, felt less like a movie about a marriage than the movie about marriage). His best film remains his debut, Brother Tied (1998), a modern riff on the Cain and Abel story set in small-town Colorado, brilliantly shot in black-and-white and widely screened at festivals (including Sundance), but never distributed and now almost impossible to see. The Place Beyond the Pines is a much biggest canvas, and scene by scene it can be riveting, in part because of the meticulous widescreen camerawork (the d.p. this time is Sean Bobbit, who shot Hunger and Shame for Steve McQueen) and also because of Cianfrance's sure touch with actors, who manage to rise above the ultimately thin and repetitive material. Towards the end, there is some especially fine work by two relative newcomers, Emery Cohen (from Antonio Campos' Afterschool) and Dane DeHaan (who was the wiry young brother in Lawless), cast, respectively, as the sons of cop and robber, trying to make sense of their entwined destinies. But the disparate pieces never quite gel; the movie is all trees and no forest.