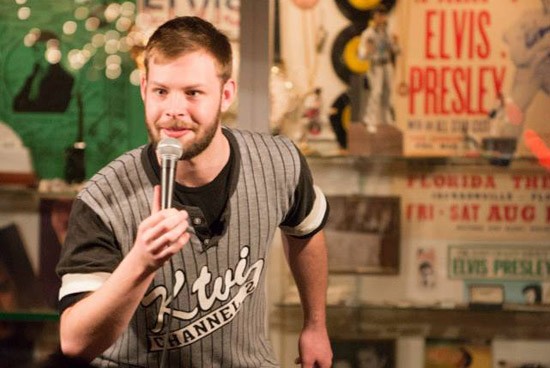 St. Louis comic Andrew Frank has proven himself to be one of the most talented, committed and dynamic comedians working in the city. In the past six months he landed himself the opening spot at the Pageant for Anthony Jeselnik, worked a clean set at Lumière Theatre for Kevin Nealon, regularly showcased at independent shows across the city and continues to feature at the Funny Bone on a monthly basis. He's a staple in the open mic scene and, given the opportunity, will perform on multiple shows a night.

This past week he displayed how hard work can and will pay off. Make Me Laugh, a nationally touring amateur standup comedy competition, crowned him the funniest comic in St. Louis. And just a day later, Frank skipped town to join the Comedy's Best Kept Secret tour alongside Dan Frigolette and Erik Anker. The tour will head all the way to Anchorage, Alaska, stopping in ten cities along the way. Frank will also receive professional head shots and a website to better promote his comedy career.

RFT Music sat down with Andrew Frank after his recent set at Taytro's Bistro in Festus and picked his brain about his next moves, as well as his expectations for the tour.

Kelsey McClure: So, you had an existential crisis in the last 72 hours. Want to go into detail as to why?

Andrew Frank: Well, I took my first trip to New York last week. It really shattered my perception of what this journey demands of me and where I'm at. There is a lot of pain and sacrifice ahead of me, but it's worth it to experience love. The further I dive into this dream, the more I am consumed by the passion to create.

Just after winning, you said it was a dream of sorts to travel west to Anchorage. Was doing standup comedy along the way part of that dream or did the Make Me Laugh Tour just provide you with a special bonus?

I've always been interested in exploring new environments. Traveling and sharing ideas with people all across the country is such a beautiful thing. This tour will be my most extensive chance to date to make that a reality. I'm going to learn so much throughout our travels. I know I will look back at this time in my life and realize that it was a crucial point in my development as a man and as an artist.

You just returned from a week in NYC; are you going back? And will it be for comedy?

I will definitely go back to New York. It is where the most ambitious minds in any field gather to reach their highest caliber. Environment is such an important part of the evolutionary process. All I want is to grow creatively as much as I can. To do that, I will have to end up there at some point.

What is the best and also worst advice you've received about pursuing a standup career?

The best advice I ever received is to take risks. If you can transcend fear and understand that failure is a necessary part of your growth, then every experience you have onstage can be valuable. If you play it safe with your ideas, it is difficult to make those massive leaps that every creative individual is searching for. It's a risk to put your entire soul into your dream, but if you hold back due to your fear of failing, you will fail by default.

As far as the worst advice, I've just had people suggest that I lie in my act "to be funnier." Honesty and vulnerability are part of what makes standup such an incredible art form. It is so rare in our culture that someone is transparent.

Do you have a comedy to-do list? Or are you just finding your way based on the opportunities that are presented to you?

My goal in comedy is to be the best I can be. I want to get funnier and refine my perspective each day I live on this planet, until I die. Whatever happens along the way will be a product of that pursuit.

I'm not on Twitter because up until recently I have had an aversion to self promotion. I know it's counterintuitive, but for the past few years I've just kept my head down and worked hard on my craft. Social media is something I definitely need to utilize in a unique way in the near future.

And how can we keep up with you along your travels? Do you want us to?

I'll keep people in the loop on Facebook throughout this tour. I'm not much of a picture guy either, over the past few years. I need to get over whatever it is that prevents me from sharing that stuff. I'll just have to find a way to share my experiences with others online without living in my phone. I can't stand it when people choose to exist in the shadow of reality represented by our handheld technology. But yes, I would love for people to follow my adventures, only under the condition that you don't look at your phone everywhere you go. That's ridiculous. There's a whole universe right here. Put your phone down.