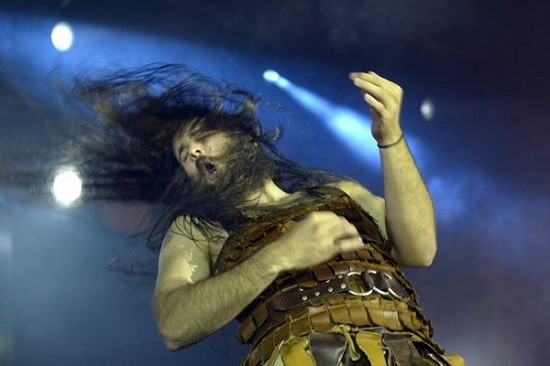 Musicians often deny it, but many dream about nailing a hit song and riding it straight to Endorsementland. Influencing the general public to buy shaving cream, mattresses and minivans is big business, and it's a level of stardom that the majority of musicians fail to achieve.

Imagine, then, how those losers must feel knowing that a guy who doesn't even play an instrument is representing a national soda company.

See Also: - Guitar Zero: The search is on for St. Louis' air apparent - Shred Like a Pro: Air Guitar Tips from the Champs

As noted in this week's feature story, Justin Howard is a professional air guitarist -- a world champion, in fact. Through his stage persona "Nordic Thunder," Howard has shredded the competition at U.S. Air Guitar events, working his way through regional and national contests before winning the 2012 world title in Finland.

Earlier this year, the soda brand tapped Howard for a spot in its "Always one of a kind" series of commercials. "I'm Justin 'Nordic Thunder' Howard, and I'm one of a kind," Howard says during the spot, which is available on Dr Pepper's YouTube channel.

Screenshot via
A scene from Justin "Nordic Thunder" Howard's commercial for Dr Pepper.

In a second video for Dr Pepper, Howard notes just how dangerous air guitar can be, sharing a story about sustaining an infection during the World Championships in Finland. "Pain is temporary, but air guitar is forever," Howard says.

"Air guitar is the only thing I have found in life that has allowed me to totally be myself, and that is very freeing," Howard tells the RFT in a story outtake. "Air guitar has allowed me to travel the world, lecture at colleges, conduct workshops with children, meet interesting people and do my best to promote world peace along the way."

U.S. Air Guitar is hosting St. Louis' first-ever qualifying event Friday, June 28, at the Firebird (2706 Olive Street). Two winners from the qualifier will continue to the Mid-Atlantic semi-finals in Washington, D.C. Howard won't be at the Firebird, but USAG Hall of Famer Eric "Mean Melin" Melin will emcee the event. Tickets are $10, and contestant entry is a few bucks more.