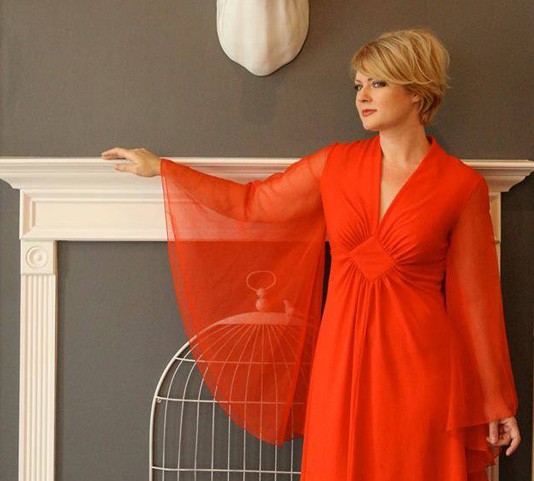 After spending eight years touring and recording with one of the best -- if not the best -- rock & roll units around, Drive-By Truckers' Shonna Tucker decided to step down as the band's bass player in 2011 to go home and chill out for a while. After touring relentlessly, recording DBT albums almost yearly, doing one-off projects with legends such as Booker T. Jones and Bettye LaVette and going through a divorce with former Trucker Jason Isbell it's no wonder why Tucker needed a breather.

But what started as an extended break quickly turned into the beginning of new opportunities. Tucker spent some time at home working on her cooking, taking care of her farm animals, and writing songs with fellow former Drive-By Trucker and pedal-steel wizard, John Neff. Now, almost two years after stepping away from DBT, Shonna and Neff are ready to hit the road with an arsenal of new songs. On Tuesday, October 15, Shonna Tucker and her band, Eye Candy, will release A Tell All, a batch of comforting, wide-eyed soul songs complimented by Southern-fried guitar work. Tucker will also release her first book of recipes. RFT Music recently caught up with Tucker through e-mail and on the phone while she was at home in Athens, Georgia, gearing up for a string of Midwest shows, which includes a set tonight at Off Broadway.

RFT Music: You spent eight years touring extensively with Drive-By Truckers. What was it like to step away from that and have some time to relax at home?

Shonna Tucker: It took several months of being home for me to be able to relax, actually. It was huge change in my life. I do love to be on the road, but I adore my time at home. I was able to take advantage of having time to write. I wrote a lot, and I did a ton of cooking. It was great for me to move on to new goals and let go of some old energy.

You seem like a somewhat reserved person. Is it weird to now be fronting a band and serving as its spokesperson?

It has been a bit of a transition moving up front and center. I can feel myself being more and more comfortable every time we play a show, though. I do have to say that I thoroughly enjoy having that kick drum hit me right in the back. That's not a bad place to stand. I'm still learning so much about being a singer, but I do feel better about it all the time.

How much does it help to have your long-time bandmate and boyfriend John Neff [pedal steel, also a former member of Drive-By Truckers] by your side when getting on stage and trying out all of this new material?

John's the captain of the ship. He is such a giant part of these songs and this band. This record wouldn't have happened without him. He is a remarkable musician. I'm still completely fascinated by his playing. He literally spends hours every day just practicing, which really inspires me. So, yes, it does help.

Prior to joining DBT, you cut your teeth as a session bass player at various studios in Alabama. What was that experience like?

I was born and raised in Killen, Alabama. From there, it's about a twenty-minute drive to Muscle Shoals. As a teenager I was already playing bass, and I became obsessed with recording. It was because I wanted to be like all of those cool guys who played on all of those cool records. I was lucky to have met and befriended so many writers and players at a young age. I started getting calls to come play on some demos here and there, and I actually stayed a bit busy. Then I played in a couple of bands with my friends, and we had several studios around that "let" us record. I've always loved being in the studio.

You have played and recorded with some pretty incredible artists. What was the most surreal experience you had when recording with these folks?

I've been so lucky to have had the opportunity to do some cool stuff. Recording with Bettye [LaVette] and Booker T. [Jones] was beyond surreal. I have very vivid and strong memories from both recordings. Just the sheer shock I felt the first time Bettye sang her first note in the studio is something I'll never forget. I had never been in the presence of a voice that powerful and controlled. And when I looked over halfway through the first verse of "Potato Hole" and Booker T. Jones was sitting four feet away from me at his B3 organ. He looked at me and smiled and nodded. It felt like a dream. I'm playing with Booker T.! Right now!

Interview continues on the next page.