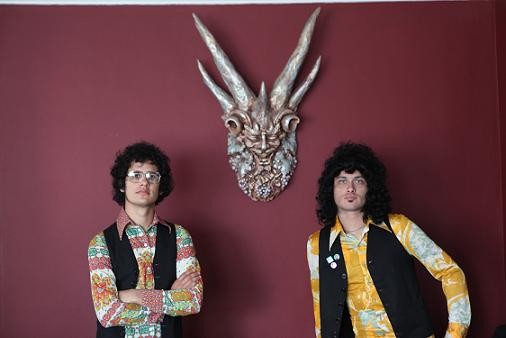 The Mars Volta is far too weird for its own popularity, but somehow Omar Rodriguez-Lopez, Cedric Bixler-Zavala and their virtual lazy susan of band members have turned virtuosic, psychedelic prog jams into gold records and a Grammy for Best Hard Rock Performance. Nobody is more surprised by the Mars Volta's success than Rodriguez-Lopez, who spoke with A to Z in anticipation of his band's appearance tonight at the Pageant.

Ryan Wasoba: Octahedron is your newest record. I noticed that people have been referring to it as your acoustic album. Omar Rodriguez-Lopez: I referred to it as an acoustic-inspired album, but I never said it was an acoustic album. People take things way too literally and out of context. At the time I wrote it I was listening to a lot of Nick Drake and Syd Barrett and Leonard Cohen, but I don't consider inspiration to be a carbon copy. Just because I was listening to those albums doesn't mean it's just an acoustic guitar and a voice.

It is a little bit more mellow than your previous work, though. I know that live, The Mars Volta is known as being this chaotic thing. Has performing these songs changed the performance ethic? Do you get a little bit of a breather? It does in a certain sense, just because dynamic-wise, they're different tempos and different moods. But I still find them challenging, just in different ways.There's a real power in something people perceive as mellow. There's a certain type of intensity in that type of sound and that type of feeling that you can't achieve no matter how hard you bang on a drum or how loud you turn up an amp. I sort of found out that after eight years of doing this band that the performances are pretty much one dimensional, that it was sort of just a punch in the face for three hours. There were very few moments of space; all the space really just happened between songs. So it seems like a nice way to add dynamics to the set when we play live.

I've always thought that Mars Volta performances must be pretty physically demanding. Oh, yeah. I think performing is physically, mentally, emotionally demanding. It's demanding on every level, because there's so many layers to it and there's so much depth to it. It is something that's cathartic, but at the same time it's very fun but it's also very physically challenging because I like my music. I'm not up there just playing my music to play it. It makes me feel good so it makes me want to dance. I'm connected to it, and I can't pretend to be indifferent to it.

As far as the band's lineup, it's always been you and Cedric Bixler and everybody else has sort of rotated. It's almost like you've gotten to form a supergroup and get musicians that you're fans of to play with. That was always a concept early on. I think it's the most important thing in playing music or doing anything in life, that you surround yourself with people that you like and love and have fun around. With At The Drive-In, we were this set group of people and this is the band and this is what it's going to be. I realized how limiting it was to have that mentality. So with this band I don't care if we have different people every year as long as it stays fresh and interesting and stays on the path that I want to stay on.

Do you think you were rebelling against At The Drive-In when you started the Mars Volta? Not rebelling against it, but dramatic changes are just part of making progress. Any time I make a Mars Volta record, it is juxtaposed with the one that came before it. Bedlam In Goliath was my most aggressive album, so it's completely natural to want to make this one a mellow record. I would hate if at the end of my life of playing music that all my endeavors sort of sounded the same. I really embrace the idea of looking at one end of the spectrum and the other and seeing that they have nothing to do with each other. To me, that's living. I had been writing songs with At The Drive-In for seven years, so finally when I broke up the group, just like if you break up with a girl after seven years, you start over and get to the core of things. What did I learn from them and how do I want to change my life and how do I move forward from here?

One way you're moving forward is by starting [label] Rodriguez Lopez Productions. How did that come about? The idea was originally to start another label. We were doing GSL for a long time and then we closed down and wanted a fresh start, just like you would quitting a band and starting a new one. Then I realized there was no reason to limit it to just being a record label. Really it should just be some factory where things can be released be it albums or movies or books or magazines or whatever it is. I just wanted to sort of leave it open ended so it can change and transform and be anything that I want it to be.

You self-released your latest solo record, Cryptomnesia. I was actually surprised by that that record's similarity to the Mars Volta in a way. Was that written around the same time as Octahedron? No, it was written and recorded at the same time as Amputechture. And of course it's going to sound like Mars Volta -- Mars Volta is my band and I write all the music for it. When I write, I don't differentiate between one project and another. I don't say "this is going to be a Mars Volta song" or "this is going to be a solo song." I just write a bunch of material and at some point it has to get organized into records. Contractually, I can only put out a Mars Volta record every eighteen months because I don't own the band name, I sold it to the record label. So by default, I find other avenues of staying healthy and creative and doing what I want within the limitations of working in the mainstream framework.

That seems like that's one of the challenging things: The system the Mars Volta exists in is sort of unfitting for you creatively. Oh, no it doesn't make any sense at all. I still don't understand at all how we've had the success that we've had, and I don't understand why major labels are interested in us and our way of doing things. It seems so backwards for their template. I mean, I turn in records. It's not like anyone from the label ever comes in and hears the records or has any input or has an opinion that matters. I make records the way I've always made them. I make them at home in my studio and then I turn them in and I say, "Pay me." It's a very strange and fortunate relationship. It seems like you just have an infinite amount of projects going on at any point in time. Do you ever just take a month off and not do anything? Not really. For me what I do is taking time off. I get to make music for a living. I'd be a fool to complain or to see it as work. Obviously there is a work aspect to it; there is a discipline that goes into it to finish any project. But in general, it's all play for me. I get to play and I get to be in my garage, so to speak, just making things for a living. I'm super grateful for that.