Out Every Night: The Best Shows in St. Louis From October 14 to October 20

This week check out Alexis Gideon, Bill Callahan and Gateway to the West Fest to start things off. After that, gear up for a crazy weekend including one of the busiest Sundays we've seen in some time. Read on for multiple picks from our critics, and, as always, stay tuned to our weekend post for even more picks.

Patty Griffin Monday, October 14, 8 p.m. w/ Scott Miller @ The Pageant - $32.50/$40 By Roy Kasten From this 2010 show preview: Of all the major contemporary country folk chanteuses, Patty Griffin is second only to Emmylou Harris in having negotiated the star machinery of Nashville, crossed over to rock and coffeehouse audiences, and adhered to a personal and spiritual vision. Her songs as covered by the Dixie Chicks ("Top of the World," "Let Him Fly") and Martina McBride ("Goodbye"), among other mainstream singers, may be her best-known lyrics, but if you haven't heard her rich, rising alto sing them, you don't really know them at all. Her music is faith-based but never fundamentalist, in touch with higher powers, deeper mysteries and an unwavering commitment to craft. 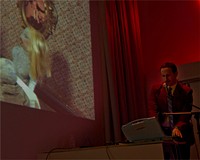 Bill Callahan Wednesday, October 16, 8 p.m. w/ Circuit Des Yeux @ Old Rock House - $13-$20 By Christian Schaeffer Since his gradual sloughing-off of the Smog mantle, Bill Callahan has made albums that veer increasingly toward a kind of lonely naturalism -- he's at home in the world as well as in his head. Dream River, his latest, has both the bucolic feel of big sky country and the wisdom of someone who has been writing and recording sui generis songs for almost 25 years. "I really am a lucky man," he sings on "Small Plane," and here the narrative distance between the singer and his song feel shorter than ever. Circuit Des Yeux, the project of Haley Fohr, will open the show with songs from her forthcoming (and delayed) release Overdue.