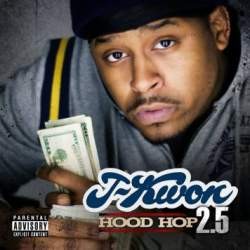 A strange story started unfolding late Tuesday night, when Gracie Productions, the record label of St. Louis hip-hop artists J-Kwon and Chingy, sent out an ABP looking for the former. According to a statement released by the label, J-Kwon -- who's best-known for the hit "Tipsy," which he released in 2004 while still on Capitol Records -- hadn't been heard from in over a month, even though he's scheduled to release a new album in a few weeks. The statement read:

J-Kwon is a big part of the Gracie family, and we are obviously increasingly worried and want to make sure he is ok," said Gracie Productions CEO/President Tony Bucher. "We've already received thousands of emails from fans and supporters who are worried about J-Kwon, and we want everyone to know how much we appreciate the love and support. If anyone has seen J-Kwon or has access to him, please let him know we are worried about him, and to please let us know everything is ok.

The story was picked up everywhere around the Internet yesterday, on sites such as PerezHilton.com, MTV.com and HipHopDX. Reactions to the news were mixed in the comments of these posts: Some called the situation a publicity stunt, others showed genuine concern and still others snarked on his career.

J-Kwon's personal, quite-active Twitter account had no activity registered after January 24 of this year (His MySpace page, which appeared to be maintained by J-Kwon himself, was last logged into on March 2.) A list of active missing persons in the state Missouri didn't show anyone by the name of Jarrell Jones, J-Kwon's real name.

A Twitter account, @whereisjkwon, was also opened to help facilitate search efforts. That's who broke the news about an hour ago that J-Kwon is apparently safe: 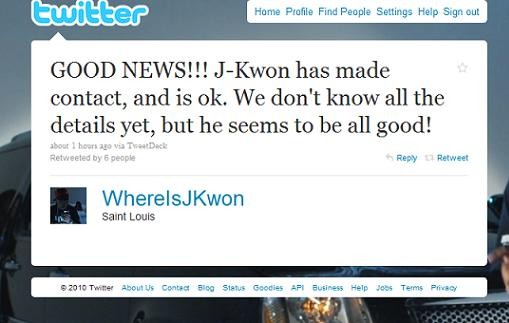 Gracie Productions' CEO/founder Anthony Bucher didn't respond to an email last night seeking comment. An email message A to Z sent to an address J-Kwon posted on his Twitter account also went unreturned. We'll have updates once I do a little more digging and make some calls.