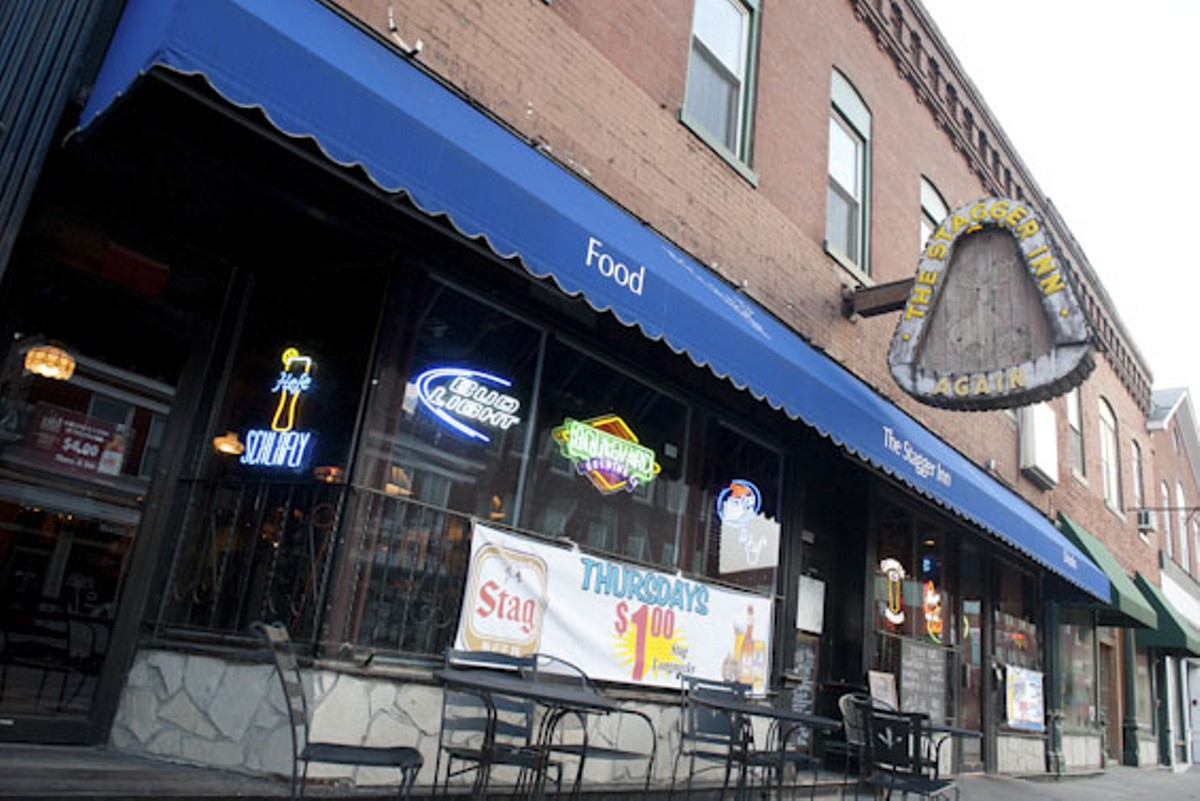 The Stagger Inn Again is one of Edwardsville's oldest bars. Jon Gitchoff

Neighborhood bars don't need bells and whistles to attract clientele. They are nearby and sell booze. Good ones provide a space without imposing a specific type of experience. They're just there with an open stool.

The Stagger Inn Again in Edwardsville, Illinois, is a good one. It's known for its live music, food and shuffleboard, but what draws most of the crowd is the people, the community. This is what a normal week looks like there.

Friday: There's an open seat at the bar. At 11 p.m. there are probably 100 people here. Only twenty look younger than 35. The crowd mingles and dances like it's a singles mixer as Mondin Band rolls through its second set of well-polished, true-to-book classics, mostly from the early '70s: the Allman Brothers, Little Feat, Santana. The band is good. People keep saying, "Aren't they good?"

John Mondin, the guitarist, fronted the Soulard Blues Band for a stint. Bassist Paul Graves has gigged around for years. There are pictures on the wall to prove it. In one, he's anchoring the rhythm section for blues great Fenton Robinson. Graves says Fenton called him the best white bass player he ever played with. Fenton died some time ago — so did Graves' old keyboard player. He found out he had cancer and was dead 40 days later. The drummer lost an eye to sinus cancer last Thanksgiving.

Graves is 55 years old. He has long, bushy eyebrows like an owl and says he sleeps with his eyes open; he's writing a song about it. "Blink, and you're old," a friend told him once. "Blink again, and you're dead."

My week at the Stagger Inn Again was 31 drinks long. The first was a Stag on draft.

Saturday: A handful of twentysomethings cruise up on bicycles and lock them to a light post outside the Stagger. Satiated smokers walk in to catch Al Holliday's Rhythm Revue. Trumpet lines and snare runs bleed out the front double doors.

The crowd is younger tonight. Holliday is 24 years old. He leads the six-piece rhythm, blues and soul outfit, vocally and from behind his keyboard and black Fender Strat. He's an earnest kid, claps out the tempo, sweats and sways through each song. He's as well schooled in Stax as Mondin Band is in Steely Dan. It's a rail-whiskey-and-Coke kind of night for me. Holliday drinks water.

The Stagger Inn opened on May 8, 1974, attracting lines of hippie longhairs from Southern Illinois University Edwardsville's campus to the center of the small, conservative town. The tavern was half the size it is now. It had no kitchen, no stage and no second room. But despite its popularity, the Stagger went under after its first decade. For a couple of years, it became a disco-balled sports bar. Randy Willimann reopened the tavern in 1985 as the Stagger Inn Again. Randy's wife, Christy Wells, took over in 1998 when he died of a brain aneurysm.

There are photos of him on the walls, too.

There are photos of almost all of the employees and regulars. "In memorial to some and recognition to others," Wells says. "I think it's the best we can do." They're family photos: 115 of them, not including the collages.

Sunday: One of the evening's performers, Jon, has a rip in the ass of his shorts, and it's getting bigger. It's his turn soon, though, so there's no time to mend it. He orders an Irish Car Bomb, slams it hard and watches the other performers while he waits.

Butch Moore has been hosting this open mike at the Stagger for 27 years. He's 60 years old, with gray hair and a goatee. Some performers fumble through parts of songs, but everyone finishes. They seem to get better as the night goes on, the same as my $1 cans of Pabst. Moore drinks Guinness and applauds after each song. "This isn't American Idol," he says. "I'm not a judge. I'm an encourager." He'll meet with people early to give guitar and voice lessons in the back office — you just have to ask.

Tami Webb peers back toward the stage from the right corner of the bar. She's 53 years old, wears glasses and has short, dark hair. She sits with regulars Mike Spikoski, 54, and Connie Wilton, 25.

Webb is an adjunct mother to a lot of the young people who hang out at the bar. They call her Mama Pittman and ask for advice about things like taking medicine, cooking and relationships. She's hesitant to give advice on the latter — Pittman is her ex-husband's last name and her sons'. She's three-times divorced. Won't say the "L" word anymore. She does standup comedy to work through it; she's got some killer one-liners. Three necklaces hang from her neck, and two have peace-sign pendants.

Monday: There are balloons. Kelly Faust just completed her PhD in sociology from Western Michigan University and was offered a professorship at Ohio University in Athens. She has family in Edwardsville, some old college friends, too. They sign a poster that reads "Ph.inishD."

"We spent a lot of time at this bar when I was getting my undergrad and master's at SIU," Faust says. "We were regulars." Her mom, Vicki Stevens, is still a regular among the happy-hour crowd. Her aunt Janet used to help run the place. Janet had surgery to remove a cancerous brain tumor last week — the conversation turns in her direction and there is a sober pause for finding support among a family of regulars.

Tuesday: At noon, twenty people sit around tables with blue-and-white gingham tablecloths. There are more tucked-in shirts and fewer cargo shorts. Lawyers and judges from the Madison County Courthouse take lunch around a circular table, while four local schoolteachers sit onstage and catch up for the first time since spring break. Sometimes people just need a good burger. The beef here is ground fresh each morning from Edwardsville Frozen Foods.

Wednesday: Tami Webb scoots up to the bar around 10 p.m. I'm in her seat. We switch, and Tim Earley, the bartender, places her usual in front of her: a Budweiser and water. From her seat, she can see the rest of the room. She likes watching young people meet and exchange numbers. "It's my therapy and my soap opera," she says.

Laura Gleeson and brothers Sean and Ruairi McInerney are the toast of the bar tonight. They're from Letterkenny, Ireland, and driving Route 66 west to Kingman, Arizona, then on to Las Vegas.

They stopped in for dinner on their way from Chicago on the recommendation of Route 66: EZ66 Guide for Travelers. Earley talked them into staying the night, helped find them a room at the Comfort Inn and a cab for later. "I'm the head of the tourism board," he jokes.

Earley is 55 years old, wears glasses and a Bell's Oberon baseball cap and has a burly red beard. He's been coming to the Stagger for 35 years and working here for 20 — the longest of anyone still there. If Webb is the bar mom, Earley is the bar dad and the heart of this place. On nights when he closes, he cleans and restocks till about 5 a.m. then walks to Fiona's Family Restaurant down the street. He's seen the town grow and change: new restaurants, new bars, franchises and chains. "This town is so trendy. It's fucked up," he says. "I always thought this town had more character."

Thursday: Every summer a group of archaeologists lines up at the Stagger to buy beers in front of a golden mirror-etching of "Old Heidelberg" that was buried under coats of white paint — a product of old anti-German sentiment — for decades until being discovered 1974.

Most of the archaeologists are SIU students earning credits in a corn and soybean field 30 minutes south of here in Lebanon, Illinois. Their work has led them to evidence of buildings, flint napping, burnt clay and pottery, but not much shade.

Tim Pauketat is a professor from the University of Illinois at Urbana-Champaign and specializes in Mississippian culture sites like Cahokia Mounds. He worked with Wells, the owner, on excavations in the early '80s. She's an archaeologist, too. He's been leading the annual summer digs and Thursday-night dinners at the Stagger Inn Again since 1998.

There's comfort in returning to a familiar place with history and character. It's a good place to end a week, or to start one. 