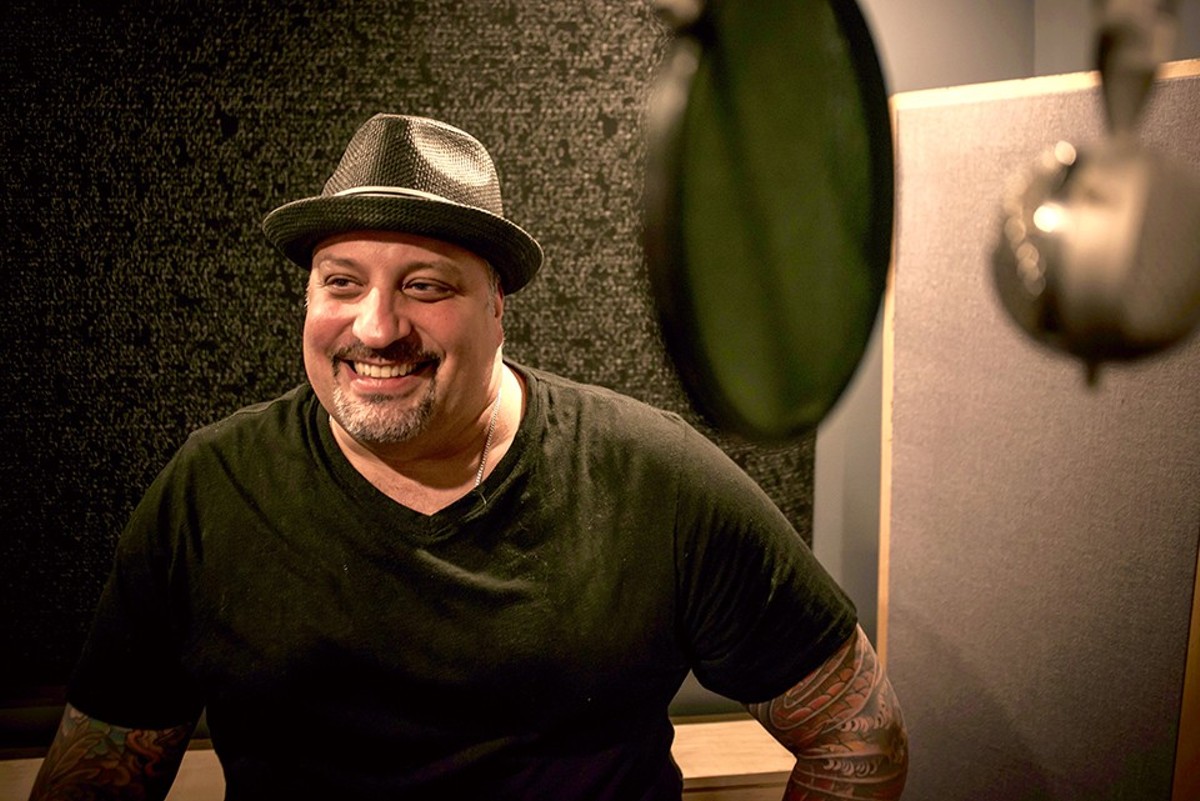 Tucked away in a quiet, quasi-industrial stretch of the Hill sits the St. Louis Recording Club. No sign alerts you to its presence — like any good club, exclusivity is part of the appeal — but most afternoons and nights you can bet that Carl Nappa will be at work behind his console.

Nappa, a Boston-bred engineer and producer, gives a brief tour of the gallery wall of records he's worked on. The wall serves as something of a Rorschach test for music fans: Wu-Tang fans will swoon to know that he has a mixing credit on RZA's Bobby Digital in Stereo; children of the mid-'90s will flip to know he had a hand in several songs on the Space Jam soundtrack. This particular writer was thoroughly geeked to hear that Nappa recorded the recently departed Dr. John for his contribution to Spiritualized's epic Ladies and Gentlemen We Are Floating in Space.

But the pride of place is reserved for St. Louis' very own Cornell Haynes Jr. Nappa's engineering and production work on Nelly's albums, including Brass Knuckles and the Sweat/Suit double whammy, are prominently represented on the wall of fame.

"I probably spent more time with him in those three or four years than I've spent with anybody else in my lifetime," he says of his time with Nelly. "You're talking eighteen, twenty hours a day."

In fact, it's Nappa's relationship with Nelly that brought him to St. Louis in the first place, initially as a traveling engineer on albums and later as an architect of the curriculum at the Ex'treme Institute (E.I.), Nelly's recently shuttered production school, which was opened with Vatterott College. It's not a role he initially felt suited for.

"I thought I was just coming up to consult," he recalls. "I was in a meeting with the [institute's] CEO and she asked me to run the school. I said, 'I'm the wrong fucking guy.' I started rolling up my sleeves — I'm covered in tattoos, I don't have a college degree and these aren't even my shoes! I borrowed them from a friend of mine to come to this meeting!"

But Nappa's twenty years in the business proved to be precisely what E.I. was looking for. As for writing the curriculum, Nappa used his own back pages to plot the students' coursework.

"I worked backwards from my own timeline: 'Where in my life did I fuck up?'" he says. "'Oh, I signed this bad contract, so we should have a class about contracts.' 'It took me awhile to understand mixing and instruments — we should have classes around that.'"

Vatterott and Nelly parted ways in January 2018 in a decision described as mutual; then, in December, Vatterott abruptly closed all of its campuses, citing a U.S. Department of Education decision that limited federal financial aid assistance for for-profit colleges like Vatterott.

Nappa recalls the sudden announcement and closure as "a horrible day."

"A lot of people lost their jobs that day, but more importantly, students got screwed," he says. "I had students that were crying because they were two weeks away from graduation and the Department [of Education] wouldn't allow them to graduate."

Nappa hasn't worked with Nelly since E.I. shut down — the rapper has been touring for most of that time — and he notes that the industry has changed so much that the idea of an in-house engineer is somewhat antiquated. While he kept a full roster of mostly out-of-town clients, the school's closure forced Nappa to decide whether he had a future in St. Louis.

"I had some job offers in Austin and Memphis, things like that," he says. "But there's something about St. Louis; I really enjoy the quality of life and the folks. Growing up in the Northeast, everything is so crazy and hustle-bustle, and I get out here and people are like, 'Hey, how ya doing? Nice to meet you.'"

Nappa is juggling a few local projects at the moment: a big band record featuring vocalist Christian Smith; a Freddie Mercury tribute by singer Terry Barber; and a forthcoming full-length from the heavy, hairy blues-rock duo the Maness Brothers.

And while he is keeping busy with local artists in his studio on the Hill, Nappa rejects the notion that it's easier to work in St. Louis, with much cheaper rent and overhead, than a city like New York or Los Angeles.

"It's harder," he says. "There's less industry. In those places, there's an infrastructure in place — managers, labels, publishing companies, things like that. Here, we unfortunately don't have it. There's no true record label, something that's employing a lot of people."

Still, Nappa notes, what the city lacks in traditional music-industry fixtures, it makes up for in musical talent and a web of professional studios and engineers. He hopes to use his decades of experience in big-name studios and major-label budgets to impart a sense of community — and a little outside perspective — to St. Louis' music scene.

"What I noticed when I came here was that the studios were segmented," he says. "Most of them didn't talk to each other." Nappa's goal in bringing more studio owners and engineers to the table is "just to get everybody on the same page and have an exchange of ideas."