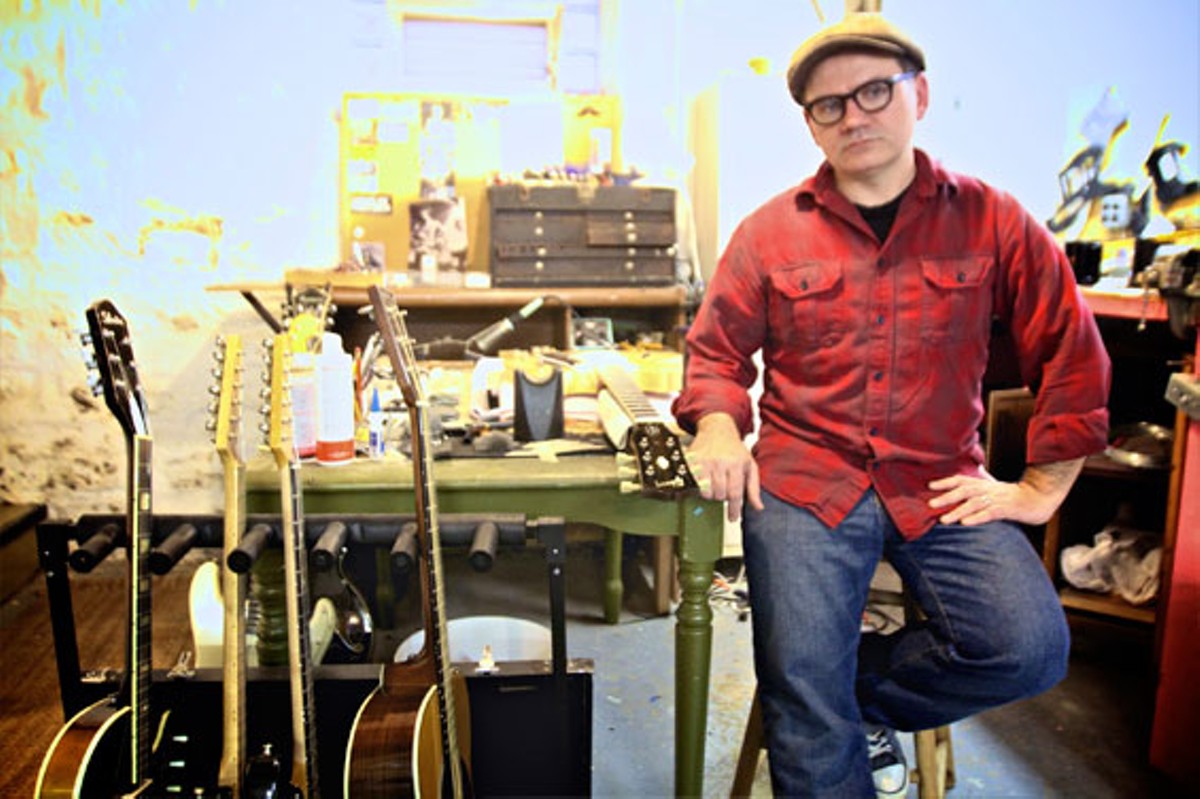 The shop and world headquarters of Tritone Guitars, the new venture for Dave Anderson — a veteran St. Louis guitarist known for his work with Tenement Ruth, Magnolia Summer and Grace Basement — is located in the basement of his North Hampton neighborhood home. It's a modest setup, in the laundry room to be exact, with a gear-cluttered practice space just a few feet away. There are two small workbenches, a blinding dollar-store lamp, a stash of tools, tins of naphtha and a row of guitars waiting for the fixing.

Anderson has long played guitar — and banjo, mandolin and pedal steel — and worked on instruments, but he's done so largely under the radar. He's still far from well known, though his instrumental skill and business have begun to make names for themselves. Tritone Guitars is more than an axe shop. Its three facets all revolve around Anderson's core talents: repair work, lessons (done in person and online) and session work.

"The idea is to do repair quickly and efficiently," Anderson explains. "There are a lot of people who are playing around town that don't have a lot of money. They're playing with broken instruments, cobbled-together stuff. I'm really focused on the community in that respect. I'm part of that community. IfHeather Rice from Rats & People [Motion Picture Orchestra] comes over with a guitar, she needs it done in the next hour. She's got a gig at the Sheldon, but she's not made of money. And I can help her out."

Embedded in the St. Louis rock and Americana scene, Anderson uses those connections to his advantage. He's worked on instruments for world-class players like John Horton of the Bottle Rockets and Mark Spencer of Son Volt, and he's worked for his friends and their friends, whenever and however they need it. On one of his workbenches sits a Telecaster neck that needs fretwork; behind him, there's a dusty Gibson with a cracked headstock. It's unclear if it's salvageable, but he'll give it a shot.

Though Anderson has built guitars, and will still take on custom builds, it's not his focus. Inspired by his daughter, a big Frank Zappa fan, he's recently pitched a guitar project for Zappa's son Dweezil. A mobile repair shop has been in the back of his mind, but the overhead and risks of a van is intimidating, and he'd rather keep his costs low and quality high.

Previously a lead repairman for Fazio's and Music Folk, Anderson originally apprenticed with Bill Moll, a nationally known luthier who has built arch-top guitars for John Pizzarelli, among other musicians. For more than four years, he studied under Moll in Springfield, before coming back to the St. Louis area in 2002.

"It became less of a learning thing and more of a work thing," Anderson explains. "Moll was growing as a business; I was just working on what he needed to keep that afloat. In the end I decided I didn't want to build for a living. The problem with building guitars is it's a Catch-22. You have to take the order, get half the deposit and then make the guitar so you can get the rest of the deposit. It's a never-ending cycle — and you're really married to the shop."

Anderson realized that he had a wide range of skill sets (he was a luthier, a teacher and a working musician), and after talking with his wife, Melissa Anderson, with whom he plays in Tenement Ruth, he lit out on his own.

"Eventually I just said, 'Why don't we do it all?'" he recounts. "As a guitarist and repairman, I'm essentially selling myself. I realized we could do it under our roof. Melissa will say, 'Who is the "we" in this?' She works with me and keeps track of all the repairs, all the guitars that come in and out of the shop."

If the business of Tritone Guitars is just getting off the ground, Anderson is firmly established as a St. Louis picker. He started out with Caution Horse in the '90s alt-country boom, played in the earliest version of Cumberland Gap, works with May Day Orchestra and has filled in with Old Lights, sharing the stage with the band at LouFest 2011. Any short list of exceptional guitarists in St. Louis would include familiar names like Dave Black, John Horton, Gary Hunt and Tom Hall, but it should also include Anderson. He really is that good.

Onstage at Off Broadway for an end of the Thanksgiving weekend gig with Grace Basement, Anderson proves it. He plays a lemon Stratocaster, turned up, with an aggressive, fat-but-musical tone. For this set, the band is road-testing some of songwriter Kevin Buckley's newest material — a Grace Basement album should be out by spring 2013 — and Anderson keeps Buckley's signature looseness in check and then pushes the hooky, power-pop sound into a harder, bluesier direction.

"We're all one big band," Anderson says of his musical network. "When Grace Basement plays, that's Kevin's vision, and you want to see that through. But he wants to hear me, otherwise he would just play the parts. You want to have a signature style and not just hash out the same thing for everybody. Tenement Ruth has evolved, we're less country and more rock. In Old Lights, David Beeman really knows what he wants, and he'll say so. That's a good thing. Magnolia Summer is Chris Grabau's thing, and I'll play pedal steel if the song calls for it."

"He's an expert musician, but he plays to the songs," Grabau says. "He truly listens and gets to know them. He doesn't just play on top of them. That can be more difficult than it seems. A part needs to lead from one place to the next. He's good at that. On the album Lines From the Frame and the song 'Birds Without a Wire,' in particular, his pedal steel just makes it. I really miss his parts when I have to play the song without him."

"I sound like myself no matter what," Anderson says, "but I try to get the idea of what the songwriter is trying to get across, to play within their realm. I do get bummed out when I see a good guitar player onstage and I can't hear them; they're barely in the mix. I always want to bring the sound forward, without stomping all over the other musicians. That's hard to balance."

As with his guitar playing, so it is with his guitar fixing. With Tritone Guitars, Anderson listens closely and communicates, as challenging as that can be, with the fellow musicians he's serving.

"Sometimes you're not on the same wavelength," he confesses. "It's like going to a chiropractor. It's not a bad chiropractor, but you're not together. When you do find one that works, it's like, 'Yes!' I'm just comfortable working in front of people. We can talk about how they play, if they're a heavy or light picker. I can set up the guitar specifically for them, they can play it, I can converse with them, and then I can make adjustments on the spot. And then they see the process, actually learn what a good setup is. That's huge."