Weird Al's UHF Turns 25 and the World Finally Catches Up 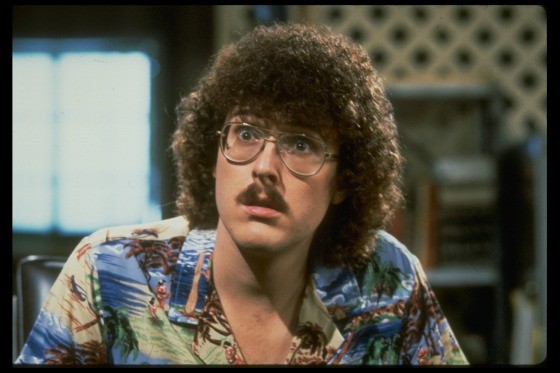 The year 2014 may go down as humanity's Weirdest. By that, we mean it's the year that the Prince of Parody "Weird Al" Yankovic has made "Weird" the new cool. After three decades of pop-decimating debauchery, we saw Yankovic finally land his first No. 1 album in Mandatory Fun, as well as roll out video after video with A-List cameos and ubiquitous media attention. For his legion of Al-oholics, these props are long overdue.

Capping off a banner year is the special 25th anniversary edition of UHF. Yes, a quarter-century ago, Weird Al made a movie. It's a film with a following is so loyal and so esoteric, it has become the epitome of a cult classic.

The Los Angeles-based pop culture preservationists of Shout! Factory have re-released the film on Blu-ray with tons of extras, including commentary, behind-the-scenes footage and even a Q&A from this past summer's San Diego Comic-Con during Al's week at the top of the charts. At Comic-Con, the mention of the UHF re-issue was met with thunderous applause, a much different reception than the one it received upon its initial release.

UHF stars Al as George, a big dreamer with an overactive imagination who struggles with holding a job until his uncle wins a small local UHF station in a poker game. George rebrands the channel with madcap programming and it becomes the biggest television station in the area. The underdog plot appeals to the fun-loving nerd in all of us, and the film's low-budget TV premise allows for parodies to flow freely throughout the narrative. (Also, look for appearances by Michael Richards and Fran Drescher, flexing their talents just before becoming famous for Seinfeld and The Nanny.)

While this is something a post-Family Guy world would eat up, the critics of 1989 did not feel the same way.

The loudest voices rallying against the film were famed critics Siskel and Ebert, whose reviews Al described in his VH1 Behind the Music episode as likening him to the antichrist. Al was being somewhat hyperbolic, but the reviews were pretty scathing: "Rarely has a comedy tried so hard and failed so often to be funny," said Siskel, while Ebert dismissed the film as "routine, predictable and dumb."

The Los Angeles Times' Michael Wilmington wrote, "The problem with UHF is that everything is parody. The only logic for anything that happens is that there's some new thing to make fun of -- mostly inanely." The San Francisco Chronicle's Mick LaSalle went further, pointing out that Al's main shortcoming is that "he isn't weird at all."

Many critics at the time attacked the film for being all jokes and no plot. And while it's true that if you removed all the parodies and just isolated the film as a story of a TV station it would kill a lot of the film's "Weird" energy, such criticisms miss the point. Ebert pejoratively described Al's method of comedy as trying everything to see what sticks. But while he sees this as an act of desperation, it's this nonstop flow of gags that is Weird Al's signature. It's what keeps his fans buying his music, watching his videos and, yes, loving his movie.

UHF was actually Al's second feature-length endeavor, following his direct-to-video mockumentary The Compleat Al, a faux-life story that built skits surrounding his career to tie his then-videography together into one narrative. Shout! Factory has re-released it along with UHF, going as far as to keep the movie's original VHS anti-bootlegging warning parody -- which may not make sense to younger fans, but will connect with anyone who remembers copying friends' videocassettes.

Sure, the subjects of some of UHF's parodies are dated, and the references may be lost on his younger fans. But the gags are akin to Al's music: Even if you're not familiar with the subject of the send-up, the jokes still work. Seeing someone on a game show attempting to win their weight in fish just never gets old. Are you sure you're too busy to make a sequel, Al?