Chateau Pensmore has been under construction for 14 years and counting 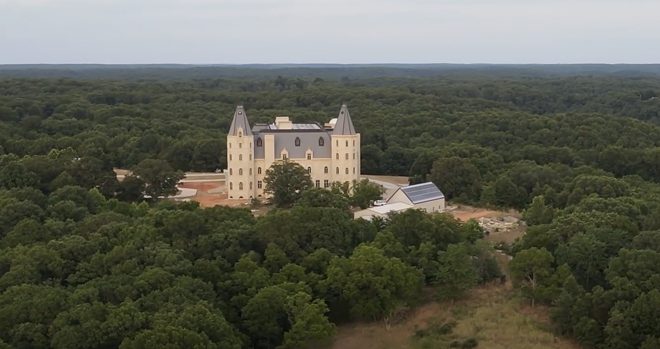 In the middle of the woods in rural Missouri, a gigantic castle has risen... sort of.

Chateau Pensmore is one of the largest homes in the world at 72,215 square feet with 13 bedrooms and 14 bathrooms, big enough to hold about 29 average-sized houses, according to a 2011 KSPR article. It is larger than the White House and over a decade later, it is still under construction in Highlandville, Missouri, 20 miles south of Springfield.

The castle is being built by Steven Huff, a multimillionaire, former CIA employee and astrophysicist who founded and sold a company that created software for military and intelligence agencies. A Virginia resident, Huff started building the humungous campus in 2008 as a second home, a few hours from his childhood home in the Ozarks, according to The New York Times. It will also feature gathering spaces for guests and a museum.

The energy-efficient castle is designed to withstand bomb blasts, earthquakes and tornados. The structure is meant to stand for 2,000 years, Huff told The Kansas City Star. Due to its size and indestructibility, some wonder if the castle is actually a military bunker.


Huff keeps a tight security on the facility. Drones have trouble flying over it, the Springfield Daily-Citizen found. No-trespassing and video-surveillance signs block the driveway. Pensmore’s general contractor, Jared Gorham, told the Daily-Citizen that if a journalist went down the driveway, the sheriff would receive an immediate notification. Gorham said everyone involved in the project tries to maintain a low profile to keep people away.

“One of the reasons that we keep quiet about it is that we get so many trespassers up here,” he told the Daily-Citizen. “It just slows things down.”

The building, though, has experienced its troubles. The home was slated to be completed in 2013. But according to the Springfield Daily-Citizen  the building still isn't finished.

That might be due to a building issue. In 2014, Huff took a construction company to court, claiming it intentionally didn't mix the concrete for the building the way he wanted. He demanded $63 million in damages and for the structure to be rebuilt. The parties ultimately settled out of court. The details are not publicly available.

So is the indestructible castle waiting for a teardown? Time will tell.