Drugs in Missouri Prisons Are a Big, Deadly Business

Despite a more restrictive mail policy, Missouri prisons are awash in drugs 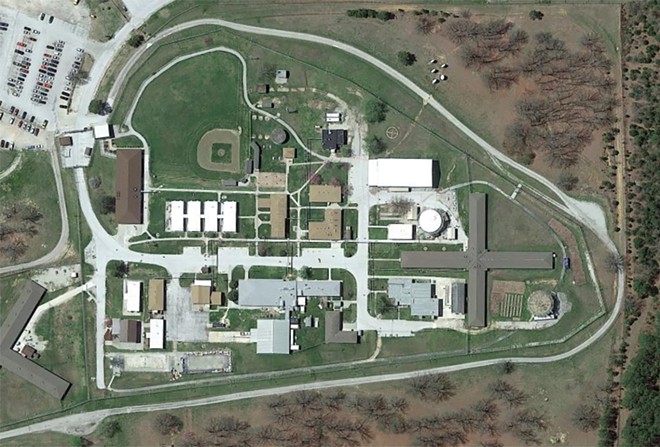 GOOGLE EARTH
An inmate from the Ozark Correctional Center says the prison is awash in drugs.

Roughly three inmates in Missouri prisons have been dying every week for the past five months, an alarming rate even more disturbing because it coincides with a strict new mail policy intended to stop drugs such as fentanyl and synthetic marijuana from getting into state corrections facilities.

The new mail policy, which took effect July 1, bans inmates from receiving physical mail. Instead, the mail is routed to Florida where it is scanned, and an electronic copy is sent to inmates on their tablet devices.

In the five months prior to July 1, 48 inmates died in Missouri prison custody. But there have been 60 deaths in the five months since. Not all the deaths are from overdoses, but a cursory look at who is dying while incarcerated shows that many of these deaths can't be easily attributed to natural causes.

Seven inmates in the prison in Licking died within a month of each other this fall; their average age was 41. Three young men — two in their 30s and one in his 20s — died within a week of each other at the prison in Bonne Terre in October. Of the 10 men who passed away in a Missouri prison that month, the average age was around 45, according to Missouri Department of Corrections records.

One current MODOC inmate spoke to the RFT on the condition of anonymity for fear of retribution from prison staff. He said that despite being incarcerated at Ozark Correctional Center, a facility focused on helping inmates with alcohol and substance abuse issues, drugs are pouring in.

"I'm at a treatment camp, and everyone here is getting high," the inmate says.

He says that the two most popular drugs are fentanyl and synthetic marijuana, which is referred to as K2. Meth is a distant third. He goes on to say that in his years in the state prison system, he's seen synthetic marijuana get more powerful, its effect on users more pronounced. What used to produce a weed-like high now sends users into what inmates at Ozark Correctional Center call "episodes."

The morning this inmate talked to the RFT, he'd seen an inmate high on K2 go out into the cold in his boxers and run right into a concrete wall. Not long ago, an inmate having an "episode" jumped from a second tier in a housing unit.

"That shit makes you stupid," the inmate says. "A person will wake up and be in the hole and not remember what happened."

In an email to the RFT, MODOC spokeswoman Karen Pojmann stressed that the issue of drug overdoses is by no means exclusive to prisons and that issues of drugs in prisons can't be separated from the wider epidemic.

"No facility exists in a hermetically sealed bubble," she says.

In addition to making people act irrationally, K2 is also making big money for whoever is bringing it into prison.

A small piece of material sprayed with K2, roughly the size of a fingernail clipping, referred to as a "stick" in prison, goes for $5, the Ozark inmate said. A stamp-sized piece of K2-soaked material sells for $50, an ID-sized piece for $300, a half page for $750 and an entire sheet for around $1,200.

As expensive as a K2 is, this inmate says that fentanyl is what people "are getting rich off of," with a gram going for between $300 and $400.

Pojmann told the RFT that it's "the demand for drugs that drives the supply of drugs, and the demand comes from the offenders who use drugs."

Pojmann adds that the department is expanding substance recovery services as well as inmate access to medication-assisted treatment and availability of Narcan.

The ease with which these drugs can be concealed makes it "virtually impossible to prevent something as small as a lethal dose of fentanyl from ever entering a facility without also keeping all food, medical supplies, legal mail and people out of that facility," Pojman says.

The inmate tells the RFT that sometimes money is exchanged via items purchased from the commissary. Other times, it's through sexual favors. But most of the time, money moves through CashApp, with the inmate buyer instructing his family on the outside to send money to an account associated with another inmate or with a staff member.

It's been something of an open secret among those who pay attention to MODOC that with physical mail shut down, and inmates' visitors subject to searches, drugs are primarily getting in via prison staff. Both activists who keep a close watch on MODOC as well as the director of the Missouri Corrections Officers union have previously told the RFT as much. Pojmann recently confirmed to the Fox affiliate in the Ozarks that staff have recently been arrested and dismissed for smuggling in contraband.

In June, 30-year-old Michael L. Lonski, a corrections officer at the prison in Licking, was arrested on charges of bringing drugs into the prison where he worked. The Licking News reported that Lonski told police he'd met with an inmate's family and agreed to smuggle in a piece of paper soaked in "liquid narcotics" in exchange for cash from the family.

According to a Licking Police Department report, Lonski said he'd been bringing drugs into the prison for five months, during which time he said he'd made about $30,000.

He regularly rendezvoused with one of the inmates' mothers at a local Jack in the Box, where he picked up greeting cards soaked in K2 that Lonski smuggled into prison concealed in his boot. During routine cell inspections, he'd slip the cards under an inmate's bunk. A random search of corrections officers brought the smuggling scheme to light. Lonksi is scheduled to be arraigned early next year.

But even after Lonski's arrest, drugs kept getting in. Starting in August, seven men died in Licking within a month of each other. Three of the men had fentanyl in their systems, and another had a combination of fentanyl and xylazine, a horse tranquilizer even more potent than fentanyl.

In October 2020, a 39-year-old woman employed as a cook at the Jefferson City Correctional Center was arrested with 39 grams of meth and one pound of K2 at the prison. The meth was packaged into bags for distribution and the K2 had been rolled into bundles to be smuggled into the prison.

Despite the case being two years old, a source with the Cole County Sheriff's Office said it is still under review with the prosecuting attorney's office and no actual charges have been brought against her.

According to St. Louis Public Radio, staff who are caught smuggling in drugs typically are referred to the warden and get "walked out," meaning they lose their jobs but aren't referred to law enforcement.

An individual who was prosecuted was corrections officer Timothy Davis. Local police arrested him at a prison in Moberly with six ounces of a "leafy substance" that had been sprayed with K2. He later said that he was paid $300 via CashApp per delivery. He pleaded guilty to delivery of a controlled substance to a prison and received a five-year sentence.

Corrections staff have long complained about being overworked and underpaid, so it's no surprise that some would find a way to make easy, illicit money. In a statement to the police, Davis said that he was about to lose his house. Lonski, the man who said he made $30,000 in five months via drug smuggling, earned a salary of a little less than $35,000.

A woman, who asked to be referred to only as Ann, frequently visits a loved one at Farmington Correctional Center. She says that the prison recently installed body-scanning machines for outside visitors.

The machines in question are Tek84 Intercept scanners, the cost of which various sources place at anywhere between $145,000 and $160,000 each.

Like most everyone who pays attention to Missouri corrections, Ann is aware of how drugs get into prisons and the danger they pose. She says it bothers her and other visitors when they are subject to thorough searches as they watch staff get waved through.

"I am so confused about why I have to take off my shoes, hand over my jacket and my change bag to be looked at, but staff walk right through the metal detector and do not," Ann tells the RFT. "One staff member set off the metal detector, and the staff monitoring the thing asked what set it off, and the staff entering just said 'Aw, it's my boots,' and then just walked in."