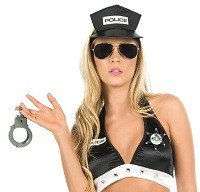 Lawsuit suggests T&C cops viewed female colleague as pure fantasy.
You may have read/heard that former Town & Country police officer Shannon Woolsey recently sued the city, claiming  she endured years of sexual harassment as the department's sole female employee. But have you heard exactly what those allegations were?

Probably not because no upstanding publication would reprint such filth -- except, that is, Daily RFT! Here, then, is a list of five of the most vulgar things that Woolsey's colleagues and/or supervisor allegedly said and did to her during her ten years on the force:

5. Discussed the vagina of teenage girls that officers would encounter in their daily duties.

4. Talked of strippers and the "shower scene" at the strip club Roxy's in East St. Louis.

3. Suggested that she meet her supervisor monthly for sex.

2. Told her to shut her "man-pleaser" when talking.

1. Introduced her to the worst pick-up line of all time: "Why don't you scratch your throat, my dick itches."

The lawsuit further alleges that when Woolsey complained about harassment from her supervisor she experienced a "living nightmare of retaliation" in which she was shunned, repeatedly passed over for promotions and labeled a "troublemaker."

Representing Woolsey in her case against Town & Country is attorney Jerome Dobson, arguably the toughest workplace discrimination lawyer in town who has won cases of age discrimination against UMSL and racial discrimination at the St. Louis Sheriff's Department.

H/T WhoLou, which posted a copy of the lawsuit here.