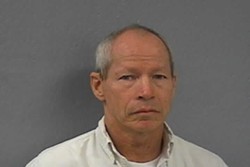 Jack B. Van Matre, 55, retired from the Springfield (Missouri) Police Department in 2006 to begin his second career as a photographer. He opened Behind the Red Door, a boudoir photography studio, in downtown Springfield and did a little wedding photography on the side. In October of 2011 he himself was married and had one of the worst wedding receptions of all time -- Springfield police arrested him at the party on charges of invasion of privacy, which soon escalated into charges of sexual exploitation of a minor.

According to the probable cause statement, the 14-year-old daughter of Van Matre's girlfriend lived with her mother in Van Matre's home. The girl noticed a video camera in the bathroom, and called her father. He called police and requested an investigation.

Police found two cameras behind false air vents. Both of those cameras were wirelessly connected to Van Matre's laptop. Watching the videos on his computer revealed footage of Van Matre hiding another camera behind the mirror in the girl's bedroom. There were also videos of the girl in various states of undress.

Van Matre cooperated with the police investigation, providing computer passwords and offering no resistance during the search of his home. As a former police officer, he had to know what the outcome of their due diligence would bring. On Friday, June 1, Van Matre pleaded guilty in federal court to two counts of sexually exploiting a minor. He faces a minimum sentence of 15 years in prison.

And according to The Crime Scene, Van Matre was asked by an Springfield police officer why he did it when they were searching his house on his wedding day last fall. His only answer was a calm, "I'd say mental illness, wouldn't you?" He then told an officer to "Just put a bullet in my head. I know I wanted to when I worked calls like this."