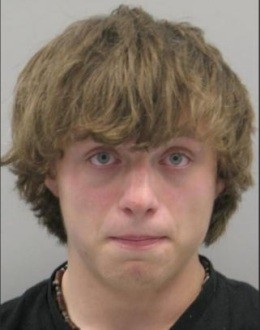 Image via Manchester Police
Joshua Witkwoski, 19, charged with one sexual assault, accused by more than a dozen others
On Tuesday, all the big news outlets in town reported that nineteen-year-old Joshua Witkowski of Winchester has been charged with sexually assaulting a fourteen-year-old girl in a wooded area of a park in Manchester.

Since then, the Manchester police say, they've received more than a dozen calls from other females, most of whom report similar allegations.

Now look: This kid is innocent until proven guilty. That's how our system works.

But more than a dozen other accusations?

We suppose it's at least conceivable that another young female might pile on an accusation for her own personal reason (spite, just to get attention, etc.). That can happen.

Apparently, Witkowski's m.o. was to become friends with the girls at parks or on Facebook.

In this particular case, the police found out because the victim told a school counselor, who then relayed it to police.

Leaves you to wonder: What happened in those other cases? Were the girls too afraid to come forward? Or did they tell grown-ups who then failed to do the responsible thing and at least report it, and let the criminal justice system sort it out?

With an initial allegation quickly followed by several others, this whole thing reminds us clergy sex abuse, a crime that -- history has shown -- is made possible by a priest's trusted role in the community. But this guy was only nineteen. If he's guilty, how would he have pulled it off so many times without getting charged?

Too early to tell.