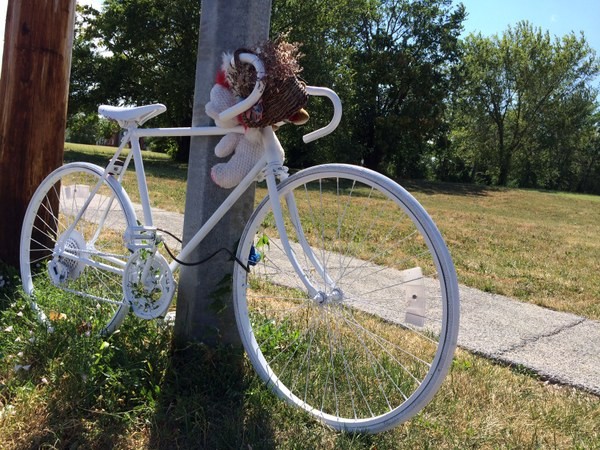 Lindsay Toler
A bike memorial marks the spot where a cyclist died on the roadway. To prevent more of these, the city plans to invest $40 million in traffic calming measures.

Last week, my son turned 15 just a few days after his very first high school homecoming. Now we’re having a conversation about another important milestone: when he’ll get his driver's permit. The biggest question on my mind is similar to other parents across St. Louis: How do I teach my teenager to drive in St. Louis?

Keeping Aden safe on the road has been on my mind since he started biking to see his friends in Clayton. The first few times he did it, I drove behind him the whole way to make sure he got there OK. It’s not just my family that feels this way; St. Louisans haven’t felt safe on our streets for years, a point tragically underscored in recent months by traffic violence on South Grand and in Kingsway West. So far this year, 11 people walking and 2 people biking have lost their lives to traffic violence, and our city feels an urgency to act to keep our streets safe.

Aldermen are responsible on a ward-by-ward basis for determining infrastructure needs and can use ward capital funds to fund these improvements, but when people do not feel safe traveling on our roads, it’s clear the current fragmented system isn’t working. Think about Kingshighway, which runs nearly the entire length of St. Louis across 11 wards. Grand touches even more wards at 12. Piecemeal solutions to a crisis that touches our entire city sets us up to fail time and time again.

St. Louis needs a mobility and transportation master plan that takes our entire city into account to coordinate broader work while helping us access federal grants we currently cannot. While St. Louis Metropolitan Police Department has increased traffic enforcement especially in high-crash areas, we need structural change on how our city cares for our streets.

This spring, my administration carried out a community survey to gauge where residents want to see remaining American Rescue Plan funds invested. With more than 5,000 responses, St. Louisans have made clear: they want change they can see and feel, with infrastructure and traffic calming and street improvements as major priorities.

The American Rescue Plan funds remaining in the bank give us the transformational opportunity to take a citywide approach by funding much-needed measures to reduce traffic violence. That’s why my administration will propose to the Board of Aldermen a significant investment of at least $40 million in ARPA funding to transform our streets in key phases while we work towards a long-term comprehensive citywide plan: building out traffic calming improvements in high-crash, high-risk areas; funding implementation on multiple already-completed studies for dangerous corridors and intersections; and adding traffic calming measures to major streets like Jefferson, Grand, Union, Goodfellow and Kingshighway already set for full repaving through ARPA. Funding from local bonds, as well as collaboration with regional and federal partners, can help these dollars go even further.

My administration has been meeting with community stakeholders and aldermen to hear and incorporate their thoughts. This is an issue that unites St. Louis across zip codes and racial lines, and we are holding community meetings both North and South of Delmar to get input from our neighborhoods about what they need to feel safer on our streets.

Working together, our city can make our most significant investment in infrastructure and traffic safety in decades so our families - and our next generation, like my son - can feel safe no matter how they choose to get around.

Tishaura Jones is the mayor of St. Louis.

Update: The headline was updated.