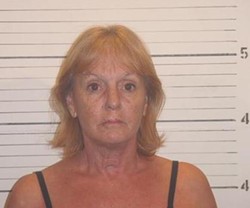 Prosecutors say Donna MrKacek covered up the murder of her young lover.
The St. Louis Major Case Squad over the weekend wrapped up the case of the man found stabbed to death outside Cahokia last week.

The victim, 38-year-old Melvin Gregory, had lived in Caseyville just a couple weeks after moving here from Georgia. Authorities say he was living with his 57-year-old girlfriend, Donna Mrkacek, when the two got into an argument on Sunday, August 14.

The argument ended when MrKacek's nephew, Dylon Baldwin and two other accomplices -- Billie "Carli" Carson and Chistopher Mays allegedly attacked Gregory. All three have been charged with murder, with Mays the last to be apprehended Friday night in southern Missouri.

Mrkacek, meanwhile, is charged with helping to conceal the murder of her former boyfriend by cleaning up the crime scene. Horseback riders discovered Gregory's body Tuesday. Gregory had been stabbed in the neck.