Anyone camping on state land could face a fine or charges 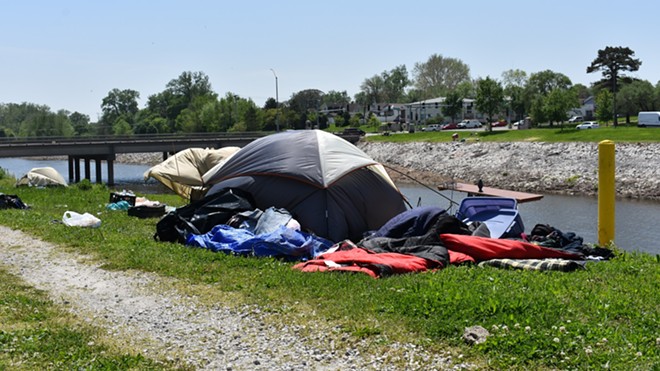 Governor Mike Parson has signed a bill into law that will make it a felony to sleep on state-owned land. The bill has drawn wide criticism from unhoused advocates for the way it seemingly criminalizes homelessness.

After one warning, anyone found illegally camping on state-owned land could face a $750 fine or a Class C misdemeanor charge punishable by up to 15 days in prison.

The law authorizes the state attorney general to sue any municipalities that don’t enforce the ban. It further penalizes cities with rates of homelessness higher than the state average by taking away state funding for unhoused services.

Republican legislators who supported the law insist this will be a good thing.

“If it isn’t backed up by threat of criminal enforcement, people won’t get off the streets, and that is truly the intent of the bill,” Representative Bruce DeGroot told the RFT in May.

Bruce DeGroot, a Chesterfield Republican who sponsored the bill in the House, says this is just “a first step” to getting Missouri’s unhoused off the streets.

Both DeGroot and state Senator Holly Thompson Rehder (R-Scott City) have staunchly opposed the Housing First federal model, which prioritizes getting the unhoused into permanent homes without requiring abstinence from drugs and alcohol.

Long-term housing acts as a cushion for the unhoused, the legislators argue, and doesn’t force them to address the root causes of homelessness, such as substance abuse or mental illness.

With this in mind, the new law prohibits cities and organizations from using state and federal grants to build permanent housing for the unsheltered. Instead, that money must be directed to build temporary camps.

Anyone who wants to use these temporary camps must submit to mental health and substance-use evaluations — a direct contradiction to the Housing First model, which stipulates that no one should have to meet requirements to seek shelter.

This legislation is so objectively bad to some, that the Missouri Independent reports a national organization got involved.

On Monday, the National Coalition for Housing Justice sent a letter to the U.S. Department of Housing and Urban Development, asking the department to issue a public statement in opposition to Rehder and DeGroot’s bill. It warned that Missouri could lose eligibility for millions of dollars in federal housing and homeless grants.

The coalition’s plea was apparently unsuccessful, since Parson signed House Bill 1606 into law on Wednesday. It takes effect August 28.