Pokey LaFarge: 'The Best Music Is Yet to Come'

Portrait of the artist as a 33-year-old man. PHOTO BY NATE BURRELL

Talking to Pokey LaFarge is an interesting experience, with little moments that both confirm and confound expectations. That he makes a pot of coffee by heating water in an old metal pot on a stovetop isn't a shocker (his whole persona, after all, embraces a days-gone-by vibe), but that he's taken on the proprietorship of a couple of neighborhood cats, renaming them Carl and Doyle and handling some of their vet bills, gives a moment's pause — as does the soundtrack of dub reggae. That he can explain any of his decisions, actions and ambitions with articulate, detailed, winding stories makes a pair of lengthy, 75-minute conversations float by, even as you feel that LaFarge is acutely aware that these words are being parsed, analyzed and eventually shared.

These days, LaFarge is primed for... something. He might not be at a tipping point, exactly, as digital music distribution has changed the way careers are built, promoted and sustained. But with the release of his seventh studio album, Manic Revelations, this week, the remainder of the calendar year is starting to come into a crisp focus, with a lot of that time spent on the road, the venues a little larger than in the past and trips a bit longer. Now a veteran of multiple tours and the lifestyle that accompanies them, LaFarge, 33, is contemplative, if not downright contemplative-plus.

"There's definitely an internal feeling," he says of his place in life. "Somewhat, it's physical. You may not be able to get around quite as well as you used to. You definitely value some different things. Chasing girls, drinking, doing a bunch of drugs ... that stuff's not important to me any more. I was always pretty in touch with my being in a long game. Being that I wanna create art for my whole lifetime and make a living off of it, you always wanna see where you are in your life, mentally and physically. I always wanted longevity. Now that I'm in my thirties, there's a benchmark, compared to where you were in your twenties. You look at that time for what it was, you look at the big goals you set out to achieve. There are pitfalls and things you didn't achieve, or you bit off more than you could chew. You put it all behind you.

"When you're in your twenties, you're more connected to your upbringing," he continues. "There's this kind of raw mindset, which is entirely about experimentation. You're full of piss and vinegar. You can fuck up and there're less repercussions for it. There are greater repercussions now, less margin for error; there's less experimentation and more knowledge. I tell people that my thirties are great. I love it. I love being this age and I look forward to getting older.

"It's unfortunate, those who say that high school are the best years in their life; it's the saddest thing I ever hear. I plan on the greatest years of my life to come. Being that I'm an artist and everything is a direct translation of the life that I'm living, I have no fear that the best music is yet to come." 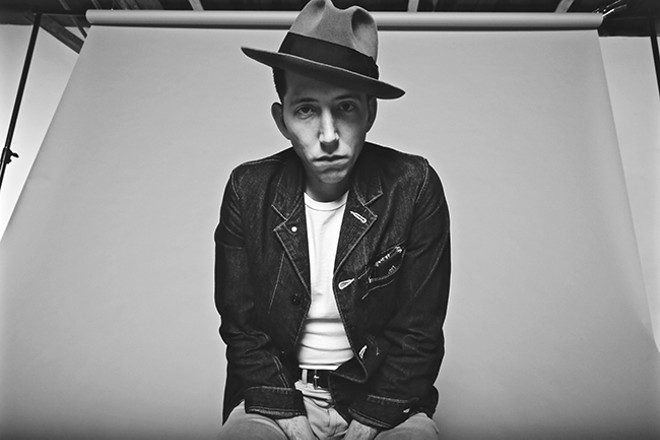 PHOTO BY NATE BURRELL
"I plan on the greatest years of my life to come."

Earlier this month, LaFarge led his band on a tour of Europe, one that the group would describe as "really easy": There were four shows featuring the whole band, as well as a pair of solo dates, along with a TV appearance. In Europe, especially the Netherlands, where the band enjoys its biggest following, LaFarge's profile continues to grow. Ditto in the U.S., where the band's now moving into the career point where they're playing the bigger venues in each town, while also looking at a host of a summer festival dates.

Now releasing music on the well-respected, established Rounder Records, with a management/media/support team located in LA, Nashville and New York, the years of self-booked tours and scratched-together recording sessions are, for the immediate future, a thing of the past.

And while some old-school fans may debate the assertion, Manic Revelations is LaFarge's finest album to date, moving the songwriter's sound into a new, surprising, R&B territory. The ten songs that emerged came from an initial pool of 25 tracks. Recording at Cherokee Street's Native Sound, the band stayed close to home — literally, in this case, as several of the players simply walked to the studio from their nearby homes, sleeping in their own beds at night.

Though happy with the comforts of this arrangement, the studio setting is still fraught with ennui for LaFarge.

In creating something that's going to be sold, "You can attach these other, worldly, earthly desires to what is just a pure thing: singing," he says. "That's what sucks about going in the studio. The greatest freedom I have is taken away. At home, by myself, singing gibberish or a melody until the words come... that's purity, that's art. When it's rehearsed and recorded and put on a record and it's my face on that and you have a publicist and then the record's out and everyone gets a hold of it... then it becomes a different thing. You don't have to be happy with it, but do you have to live with it. If you're making a with it, you still want to improvise, create things on the spot. In the studio, there're so many people telling you what to do, your mind can play tricks on you."

The flipside is that there's a batch of new material to spring on the world.

"Most of this work," he says, "people haven't heard before. And I like that."

A couple of weeks back, in the mix of his morning drive show, John Wendland of KDHX's Memphis to Manchester spun "Better Man Than Me," the second single off Manic Revelations. It sounded right at home on his playlist. A songwriter and occasional performer himself, Wendland's a true musicologist, yet on-air, he spins tracks with just a touch of the backstory, rather than holding forth for minutes at a time. He's spare, yet generous with his musical knowledge. He also gives local cuts more than a fair shake.

With "Better Man Than Me," Wendland notes, "My first exposure to this song was from the official video they just released. It's instantly recognizable as Pokey LaFarge, but you hear other musical influences — doo-wop, early rock & roll, R&B — creeping in there. You could slap the Jordanaires in for the backing vocals, yet the song still wouldn't sound like a musical relic. I was enamored with the song within the first ten seconds and knew it would sound great on the radio."

He adds, "I like music that has a timeless feel about it but doesn't just sound like a slavish impersonation of something from the past. I think Pokey avoids that, whether it's from his lyrics (the lyrics to 'Riot in the Street' aren't going to be confused for those of a '40s song any time soon) and attitude (I feel like there's an undercurrent of punk to some of his songs). I don't know the man. He would probably laugh some of this off, but I get a feeling of him using music influences of the '30s, '40s, and '50s as a template; but he's twisting it into something different to get his own personally defined music across."

Chloe Feoranzo, who played in LaFarge's band from 2012 to 2015, says that his "songwriting is very accessible. People hear it and can instantly like it. Some of the melodies are really catchy and will rattle around your head for awhile."

David Beeman and Tony Hoffer of Native Sound coaxed the good stuff out of whatever anxieties the studio might bring, LaFarge says.

"Me and Beeman were there the entire the time," LaFarge says. "The guys came and went. There was no one producer.

"They're constantly evolving over there," LaFarge adds. "I want people to know how special that place is; David and the whole team there are pretty awesome. We have a special thing in this town with them, it's truly a special place."

It's a relationship that could, he says, be carried over to the next work. And it's the relationships that LaFarge has built, those longest ones, that serve him well today.