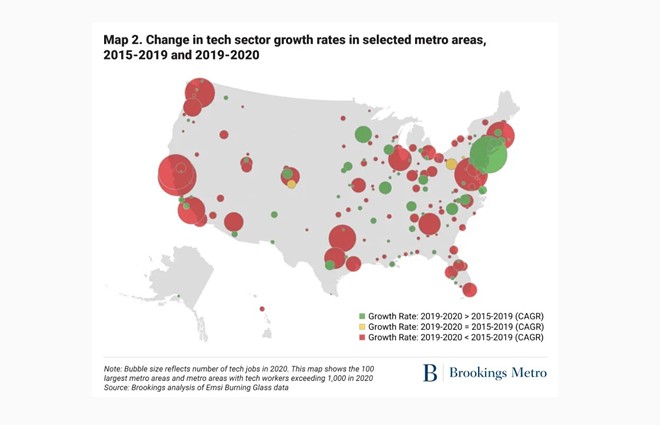 Brookings Metro
St. Louis tech doesn't represent the biggest green dot on the map, but it's not bad!

St. Louis comes out looking good in a new report from the Brookings Institution, which calls attention to “rising stars” that have done a solid job in recent years of adding jobs in fast-growing technology sectors.

Employment data from 2020 suggest St. Louis, Kansas City and a handful of other metros are poised for further progress, according to Brookings researchers Mark Muro and Yang You.

Eight “superstar” metros mostly on the coasts (like Los Angeles, New York, San Francisco and Seattle) have dominated job growth over the past decade in key tech sectors like software publishing and computer systems design.

Tech employment hasn’t really spread out across most areas of the U.S.; in fact, it’s become even more concentrated. “[T]he geography of the tech sector solidified into an uneven ‘winner-take-most’ dynamic,” the researchers wrote.

At the same time, Brookings identified a group of mostly midsized metros away from the coasts, where tech employment also grew briskly between 2015 and 2019. Besides St. Louis and Kansas City, the list includes Atlanta, Dallas, Denver, Miami, Orlando, Salt Lake City and San Diego.

“We’ve been somewhat skeptical of the ‘rise of the rest’ as a real dynamic to date, but I think we can see signs of it now in a limited way,” Muro says.

By 2019, about 28,000 people in the St. Louis area worked in the tech sector, while Kansas City had 40,000, according to Brookings’ analysis of data from Emsi Burning Glass, which tracks the labor market.

The pandemic hasn’t caused a massive reorientation of tech work into the American heartland, but it does point to the possibility of some intriguing new patterns, according to Brookings.

Job growth also slowed in the rising-star cities, with one exception: St. Louis. The metro had faster growth in 2020 (4.8 percent) than the five years prior to the pandemic (3.9 percent).

“St. Louis is in a group of cities that are actually making real progress on tech, and the growth in 2019-20 is an interesting feature,” Muro says. “Maybe it does say St. Louis is finding ways to attract people.”

Is St. Louis the next Silicon Valley? That would be stretching things, to put it mildly. Brookings also looked at national data involving tech job postings and new tech firm starts in 2020 and 2021.

These more recent data paint a mixed picture for metro St. Louis. Muro found that tech job postings ended 2021 substantially below where they started in 2020. Yet in terms of new tech firms, St. Louis increased its share of the national total.

“These are small numbers [the posting data] so I wouldn’t place too much stock in it, but it does cut against the 2020 surge and maybe raises doubts about how meaningful the one-year surge is,” Muro wrote in an email. “With that said, the new-firms info supports the idea of an uptick.”

For St. Louis to show up on a list of rising stars in tech — a list that’s backed by several years of hard data on jobs — is noteworthy, especially as groups like business/civic organization Greater St. Louis, Inc. work to solidify the metro’s status as a hub for fast-growing businesses.

St. Louis is one of 60 finalists in the Build Back Better Regional Challenge, a federal competition that will award 20 to 30 regions up to $100 million each for projects in tech and related fields. The final St. Louis proposal, which envisages an advanced manufacturing center in north St. Louis as part of a “Regional Tech Triangle,” was due Tuesday.