Suzanne Venker Will Be on ABC's The View This Friday 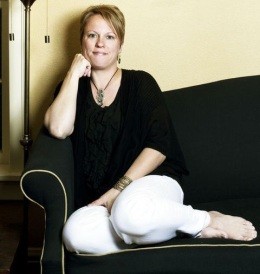 Venker is the niece of conservative icon Phyllis Schlafly, and in many ways, her intellectual heir. (We profiled Venker in a May 2011 feature)

The occasion for Venker's appearance on the morning talk show (which is hosted by Barbara Walters, Whoopi Goldberg and three other ladies we don't recognize), is the article that Venker wrote in November for Fox News entitled, "The War on Men."

In that piece, Venker argues that while women still want to get married, fewer and fewer men do. It's women's fault, she believes, because "women aren't women anymore."

after decades of browbeating the American male, men are tired. Tired of being told there's something fundamentally wrong with them. Tired of being told that if women aren't happy, it's men's fault.... the so-called rise of women has not threatened men. It has pissed them off. It has also undermined their ability to become self-sufficient in the hopes of someday supporting a family. Men want to love women, not compete with them. They want to provide for and protect their families - it's in their DNA. But modern women won't let them.

Venker thinks feminism is to blame:

Feminism serves men very well: they can have sex at hello and even live with their girlfriends with no responsibilities whatsoever.It's the women who lose. Not only are they saddled with the consequences of sex, by dismissing male nature they're forever seeking a balanced life. The fact is, women need men's linear career goals - they need men to pick up the slack at the office - in order to live the balanced life they seek.

Not surprisingly, Jezebel had quite a bit to say about this, and has referred to the article as

stupid, mindless garbage that paints women as testicle eating castrators and men as delicate babies upset that their feelings aren't being appropriately catered to. Women aren't letting men "win" in this ongoing battle of the sexes, and in response, men are taking their ball(s) and going home.

(If for no other reason, Daily RFT will be watching The View on Friday because Albert Brooks will be on.)