Thanks to the People's Joy Parade, Cherokee Street's Cinco de Mayo Will Never Be Normal

2) That procession which has intersected the Cinco de Mayo festival on Cherokee Street each year since 2009, powered by love-feels and not by corporate sponsorship;

3) Any annual St. Louis parade organized by mostly white artists in a mostly black neighborhood during a Mexican festival on a street named after Native Americans 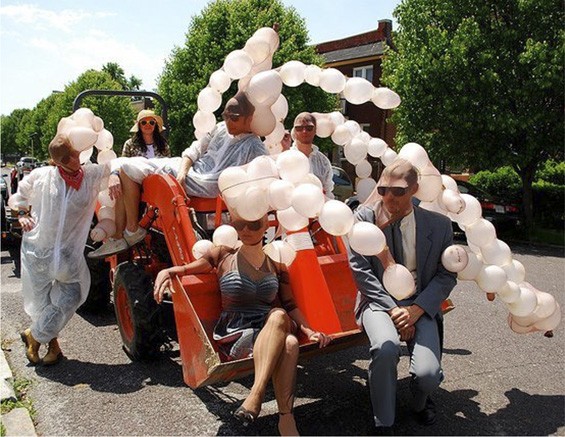 Courtesy of Mike Stasny
Artist Mike Stasny (right) and his MSIF bandmates at the second parade in 2010.

"It's truly anything goes. The only structure is that everybody lines up." -- Galen Gondolfi, frequent participant and founder of Fort Gondo, a nonprofit arts forum on Cherokee Street

"We encourage costumes and artists because that's about whimsy and play and making the everyday magical. But it's totally inclusive. You can join in at any moment." -- Sarah Paulsen, parade cofounder

"Blue jeans and a T-shirt isn't gonna cut it. Get out your glitter. Don't be boring. Do not be boring. Let your freak flag fly a little bit. Be silly. Enjoy yourself." -- Jenny Callen, parade coordinator

"It's both painful and orgasmic. There must be a variety of life-threatening infrastructure [on the floats]. Without that component, it's not worth it." -- Galen Gondolfi

Elisa Forgelman
Sallie Durbin and co-founder Sarah Paulsen in front of the Mermaids by the Mississippi.

In 2007, Sarah Paulsen -- a St. Louis-based artist, animator and teacher -- voyaged to the town of Ayacucho, Peru. One day she was swept into a church parade. The sensation was so intense she began to cry."For a long time I thought about that parade and what it meant," she says. She concluded that its power lay in the feeling of solidarity, a solidarity that was somewhat lacking in the Cherokee neighborhood to which she soon returned.

Cherokee was in transition. A century earlier, the south-city street had hummed with dry-goods stores and even a trolley. After World War II, department stores and high-end boutiques moved in. Then the city started emptying out in the '60s. Cherokee fell into a slump of burglary, murder, drugs, prostitution and neglect.

But by the mid-aughts, a renewal was underway. Latino business owners opened eateries and groceries. Artists like Paulsen came hunting for cheap studio space. Ensconced in this new multiethnic mix of neighbors, Paulsen wondered whether artistic events could help bridge cultural gaps between them.

She fell into a dialogue with Lyndsey Scott, a staffer at the Cherokee-based Community, Arts & Movement Project, or CAMP. Scott had been working with local kids there. She, too, yearned for stronger neighborly bonds, and believed that spontaneous, playful interactions in public could foster them.

"But it was like, where?" says Scott. "There was no public space."

In the spring of 2008, Scott circulated an email. The idea was to gather a small crew of merry-makers to scramble around the annual Cinco de Mayo festival in disguises. She wrote:

Bring your Zany your Colors your Unafraid Bring your Cooky your Monkey your Tambourine Bring your Foofoo your Feathers your Umbrellashade Bring your Stilts your Maracas your Songlungs true Bring your Poem to shout Bring your lumps to shake Bring you.

She added, "Please don't post this to list-servs." She wanted her "baby street theatre parade seed" to be kept "more on the mum side so it has some surprise flava." About twenty people showed up.

The next year Scott and Paulsen announced the first formal People's Joy Parade. They got the proper permits and scheduled it to coincide with Cinco de Mayo.

They had no funding, "just heart and guts," recalls Paulsen, who personally hand-crafted some invitations. She and Scott also passed out fliers at Cherokee shops and knocked on residents' doors.

"I don't remember overt interest," Scott says. "We weren't in costume. The message was, 'We're sane. You can trust us.'"

Shacklett formed a small sing-along troupe called the Footbeat Choir. Her job was to strum guitar and lead paraders in belting out classics such "Lean on Me," "This Land Is Your Land" and -- in honor of Cinco de Mayo -- the Mexican folk song "Cielito Lindo."

(The Footbeat Choir's repertoire has since widened to include Michael Jackson's "Man in the Mirror" and Stevie Wonder's "I Just Called to Say I Love You," among other tunes.)

For that first parade in 2009, about 150 people came and marched, and not just visual artists: The Roosevelt High School's marching band banged on drums, while Latinas from St. Cecilia Catholic Church twirled their dresses in a Mexican folk dance.

"I couldn't believe we pulled it off," says Paulsen.

The next year, Paulsen and Scott launched a Kickstarter campaign, calling on:

Many answered the call, and the People's Joy Parade congealed into tradition.

"I remember the feeling of slow-motion beauty, walking down the center of street with the kids," says Scott, who has since moved to Illinois. "That is such the world that I wanted to create for them, where play is permissible, people are cheering for you, and you can sing love songs for strangers."

Since then, the People's Joy Parade has become a fixture of Cherokee's Cinco de Mayo street party.