The RFT's 2016 Guide to Shopping Local in St. Louis

We gave five shoppers $100 each. Here's what they found in Soulard, the CWE, Downtown, South Grand and Cherokee

You may be looking for the kind of hand-made or purposefully repurposed goods that you just can't get at the mall. You may be too lazy to drive to Chesterfield. You may just want to escape the big-box boredom of the suburbs. Whatever your reasons, shopping locally can have a big impact. Keeping your dollars in the community shores up neighborhoods and fuels the young creatives investing in them. And, yeah, it helps you find neat stuff, too.

This year, the RFT gave $100 each to five St. Louis movers and shakers. The only stipulation: That they spend it in a particular walkable neighborhood — and let us come along for the ride. With shoppers surveying the Central West End, Downtown, South Grand, Cherokee Street and Soulard, the experiment resulted in a host of interesting purchases — and a whole bunch of inspiration for your next shopping trip.

I originally sought out Soulard because my business partner and I were opening Fleur de Lilies, a restaurant with a Creole concept. That made the neighborhood kind of a no-brainer — it has such a French feel.

I'd actually never been to Soulard before we looked at the building. I'm a Central West End girl at heart. OK, I'd been to the market a few times, but that was my only reference. So once we signed the lease I had to discover everything, and that was really cool. When we first looked at the Fleur de Lilies building, the neighbors immediately came over and started talking to us, and it just felt right. There is so much character, so many beautiful places. You could go get your food from the Soulard Farmers Market or Vincent's. Really, you could live your whole life there, with everything you need. 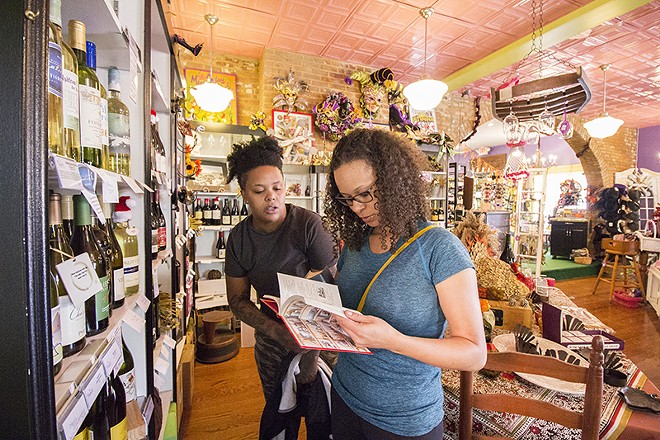 PHOTO BY MABEL SUEN
Jackson and Sampson check out offering at the Porch in Soulard.

The Porch (1700 S. 9th Street, 314-436-0282) is one of those places. It's a really unique wine and gift shop that's diagonal from Bogart's in the heart of Soulard. They have everything. We spent a lot of time there looking at trinkets, books, some really good pictures. I got some candles and a really old cookbook called The Encyclopedia of Cookery that is going to come in handy. It has everything in it, like it breaks down different apples and compares them to each other, talks about the difference between ground and cracked pepper and just a lot of things that are good for me to read. I can cook my butt off, but I'm not a trained chef, so that book helped validate some of the stuff I already thought, and now I can see why it made sense to me.

After the Porch we went to Soulard Spice Shop (730 Carroll Street, 314-783-2100), which is inside the market. I had never been there before, but my shopping companion, our chef, Ceaira Jackson, had. But even she didn't know everything they had. We looked around and got some ground coffee, some loose tea, a tea ball and the "Soulard Grill" seasoning mix, which is amazing. It has a real smoky flavor, and I put it on some salmon yesterday. That store is awesome because they are really sweet and informative about things, like different ways to grind the coffee and how to make it stronger or weaker, or the tea and how many times you can use the tea ball.

Vincent's Market (2400 S. 12th Street) is a local grocer and they've been in Soulard since the early 1900s. You wouldn't believe the wine selection they have at this local market. I got some wine and Champagne there and spent time looking around, which was nice because usually I am running in there to grab something really quickly. It was nice to go in and have the chance to walk around and see what all they really have — some cheeses and charcuterie and a really nice beer selection and local ice cream. It's a really nice place.

The last place I went was La Belle Histoire (2501 S. 12th Street, 314-556-0156); it's almost like a witch shop. The owner makes custom handmade Mardi Gras masks, candles and handmade Chinese lanterns. They also sell voodoo books and books on praying away bad spirits. The owner is really sweet, and it's just a really unique place. They have some really good smelling lotion, perfume and lip balm. She makes some of them, and others she brings in from small distributors. There is a company called Tokyo Milk that I really like that makes perfumes and lotions, and they have really good artwork on their stuff — the lotion comes in a painter's tube, and each different scent has different artwork on it. They have it in Sephora and at the mall, but I didn't know they had it in a local place. The store also has tons of things with the fleur de lis on them. I don't know if that store would work anywhere else, but here in Soulard, it fits right in.

— as told to Cheryl Baehr Turn the page for shopping trips through Cherokee Street, South Grand, the Central West End and Downtown.