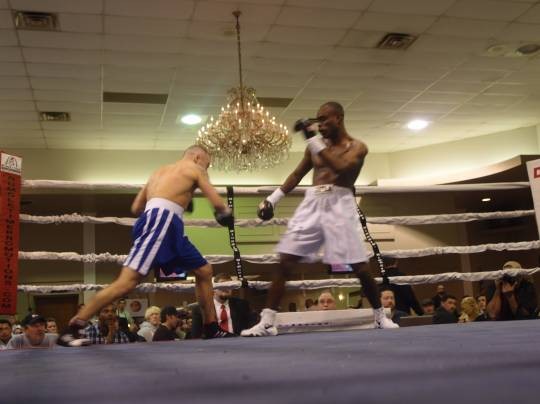 Troy White pushed his record to 4-2-1 on Friday with a decisive unanimous decision win. His opponent was a thick fighter name Justin Robbins. It was Robbins' debut as a pro and White picked him apart as much as he should have, dancing around the ring, establishing his jab early, and pounding at the body throughout.

When he saw Robbins for the first time at the weigh-in on Thursday, he noted his opponent's bulk. So he started cautious, keeping his hands up and sneaking in counter punches. Toward the end of the first round, though, he turned up the aggression and shot off a couple of flurries.

White jabbed with the left then followed with a sharp right hook, knocking Robbins to the canvas. He chased that with a succession of three and four punch combos-- straight rights and lefts piercing the openings created by the consistent jabs.

As Robbins tired, he began leaning on White, initiating clenches more than a dozen times throughout the second half of the fight. Displaying his boxing guile, White would batter Robbins' torso on those clenches, pounding out scores of body shots each round.

It was White's fourth consecutive victory.

It was also White's final bout as an unsigned fighter. After the contest, he joined Rumble Time Promotions, the biggest boxing company in the St. Louis. Jumping into his new role, later that night he was eager to say, "I wanna thank Rumble Time Promotions." Then he thanked one of coaches, Otis Brown, for stressing to him before the fight to stick to his game plan.

One of Rumble Time's most promising boxers, Stephon Young, fought a few minutes before White. Young, a 2011 Golden Gloves silver medalist from St. Louis who turned pro in August, showcased his blindingly fast hand speed and smooth ring generalship in a second round knock out victory over Clayton Coots, brining his record to 2-0.

While there were no CompuBox statistics to confirm this, it is possible that Young's opponent, who's only had one previous bout, didn't connect a single clean punch. In the first round, Young exploded with three four or five punch flurries. He dictated the flow with crisp footwork, crouching low and sneaking in straights to the body at every opportunity.

He hurt Coots early in the second round with a jarring uppercut. Then, showing a keen killer instinct as his opponent covered up, he let loose with a barrage of head shots from dizzying angles until Coots fell to knee. Soon after, he finished the match with a punctuating straight left.

It seems Young is working his way up to a comfortable size. He kept his 114-pound amateur weight for his debut, but moved up to the 122-pound division for Friday's fight, for which he weighed-in at 123 lbs.

There were four other fights on the card at the Heart of St. Charles Banquet Center. Three of them ended on first round knock outs: Keith Debow (2-4-1) over Justin Henderson (0-2), Ian Warren (1-0) over John Fortt (0-1), and Chris Rapa (4-0) over Tim Franklin (1-3). Shannon Miller (25-47-8), a 36-year-old cruiserweight from Columbus, Mississippi, upset St. Charles native Shawn Hammack (21-8-2) in the main event with long stiff jabs and discipline one-two punch combos.