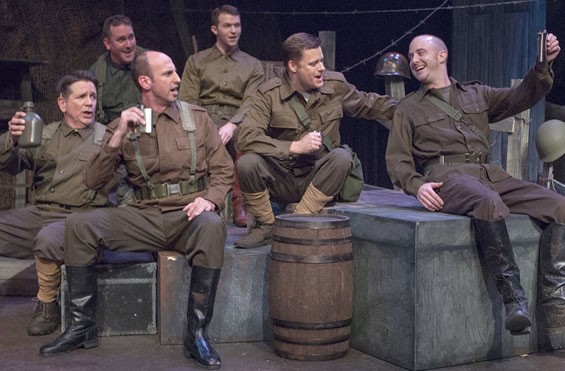 Hoping lightning will strike twice, Mustard Seed Theatre is reprising last year's popular staging of Peter Rothstein's, All Is Calm: The Christmas Truce of 1914, an a cappella musical about the impromptu truce that emerged between British and German soldiers during World War I.

Cobbled together with actual letters from the event and featuring songs the soldiers sang, the production shares many similar elements with last year's show. Director Deanna Jent returns with music director Joe Schoen and the original cast, whose combined performance last year took home several St. Louis Theatre Circle awards, including "Best Director of a Musical," "Best Production of a Musical" and "Best Ensemble in a Musical."

I wasn't fortunate enough to see last year's award-winning production, but after taking in the revival opening weekend, I can only surmise that the quality of St. Louis musical theater has improved mightily in the past twelve months.

It's not that the production doesn't have its moments. Many cast members have nice voices and harmonize well (Eric Lichte and Timothy C. Takasch did the musical arrangement). J. Samuel Davis turns in a fine performance singing and reciting a number of letters, and Antonio Rodriguez, Charlie Barron, Jason Meyers and Luke Steingruby all sing beautifully and deliver their lines well. (That said, the show does call for a wide range of accents, some of which are beyond the performers' abilities.)

Aside from the songs and the power of the event itself, however, there's not much to this show. None of the characters is presented in any depth. They appear largely in cameo, delivering a few lines before receding back into their regiment, never to be heard from again. Sure, the soldiers meet in the No-Man's Land between the trenches. They serenade one another, play a round of soccer, exchange gifts and even help bury each other's dead.

But with no continuity (or emotional depth) among the characters, we're left with the mere outline of a familiar story. It's a moving idea, sure, and it's wonderful that such humanity can emerge in the depths of war. But we already knew that, and All Is Calm, at least in this production, doesn't bring any new emotional insight or perspective to this well-known historical moment. It works best as a thematic holiday concert.

But maybe that's enough. The performances are generally sound, and while not every cast member possesses a trained and dulcet voice, the actors do bring a certain energy to the erratic, quick-moving script. (The show clocks in at an economical 60 minutes.)

Still, these production elements aren't enough to overcome the feeling that, as its title hints, All Is Calm is maybe a little too tame for its own good.