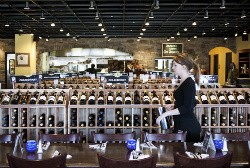 When we first heard that Balaban's Wine Cellar & Tapas Bar (1772 Clarkson Road, Chesterfield; 636-449-6700) took home one of Wine Spectator's awards of excellence, we were happy for the restaurant. We still are. Open for just over a year and a half, Balaban's was the only St. Louis winner that doubles as an eatery and retailer. But with 3,700 restaurants named worldwide -- 37 of those in Missouri -- we have to question just how rigorous the judging process is.

The special-interest magazine contest recognizes restaurants for good wine selections that match the menu and are priced fairly. There are three levels of awards: the award of excellence, the best of award of excellence and the grand award. To be considered, entrants must submit a current wine list, the dinner menu and a "one-page cover letter on restaurant letterhead describing storage conditions, inventory, pricing." The letter must be in English and, oh yeah, Wine Spectator is gonna need a $250 nonrefundable entry fee.

We know that college applications, for example, come with a processing fee. Wine Spectator's website is a little fuzzy on how the contest is judged, but Balaban's rep Carol Miller suspects the vetting is rigorous. Restaurant employees suspect the magazine's employees were behind many oddly specific calls that came in to the restaurant after its application was submitted. And you have to pay someone to do that work. We get it.

Still, if you do the math, the wine mag raked in a cool $925,000. And that number is based only on restaurants that were awarded, so the number could be higher. Although after looking at the restaurants that won -- Chateau Grille in Branson, Missouri, for example -- it seems everyone's a winner when it comes to the contest.

A full list of local winners is posted after the jump.