In October, the Incurables had the opportunity to open several Midwest dates for Alejandro Escovedo. Guitarist/vocalist Jimmy Griffin agreed to keep a tour diary for A to Z. Here's the second installment; part one is here. All photos are from the Bloomington, Illinois, show. Stay tuned to A to Z for more recaps in the coming weeks. -- Annie Zaleski

BY Jimmy Griffin
10/16 The Madison Theater -- Newport, Kentucky/Cincinnati Cincinnati for me is like going home. I lived there from [the ages of] 6-15, and still have friends that I keep in touch with = nice place to crash. You know the routine: 9 a.m., pick up van, 9:30 meet band, load up, on the road by 10. This time we're headed out 64/40 across Illinois, Indiana and Kentucky, much more tranquil than our million-orange-barrel march of a few days ago.

The band has decided that comedy discs are good time passers. Patton Oswalt and Bill Hicks light our way. I stop the van about 30 miles outside our destination and retire to the Mancave (the back seat of the van reserved for drivers and those about to drive, who are then saluted with a steering wheel). No food for us til I find a Skyline or Gold Star Chili. It's a Cincinnati thing that some folks will never understand. Get to the venue as Al is beginning to check. Load in. Friendly promoter greets me with our money and buyouts (if a club doesn't want to feed you, they give you ten bucks apiece).

I think this place usually leans a bit toward the metal. This assumption is based on the hairdos, facial piercings and concert t-shirts of the local crew. Speak briefly to Al, who alerts me to the Chicago encore debacle... more apologies... won't happen again. At soundcheck we realize something very peculiar. The front wall of the balcony is made of plexiglass, and the PA is aimed right at it. I tell the soundman that I think the hi-hat is in the monitors with delay on it. He tells me its the plexi and that we'll get used to it. We don't. I equated it to a giant baby sitting in front of the band with a rattle the size of a snow shovel shaking it out of time.

7 p.m., doors open, Alejandro fans are greeted to "Bitches Ain't Nothin But Trouble" or whatever the name of that song is, very surreal. A few songs down the playlist is a Deathklok tune. On at 8, good show despite the giant baby. Sell 15 or 20 discs. On most of these runs I was "the sober guy" cause I was the primary van driver. (For me sober is 1 shot, strictly in the interest of keeping my voice together, and 2 beers. I'm Irish.) Tonight I have too many old friends here (and a case of Coronas snaked from the friendly promoter) to concern myself with sobriety. I secure sweet Jordan (Heimburger) as chauffeur, and begin socializing with old friends that had shown up, some of which I had not seen since eighth grade. 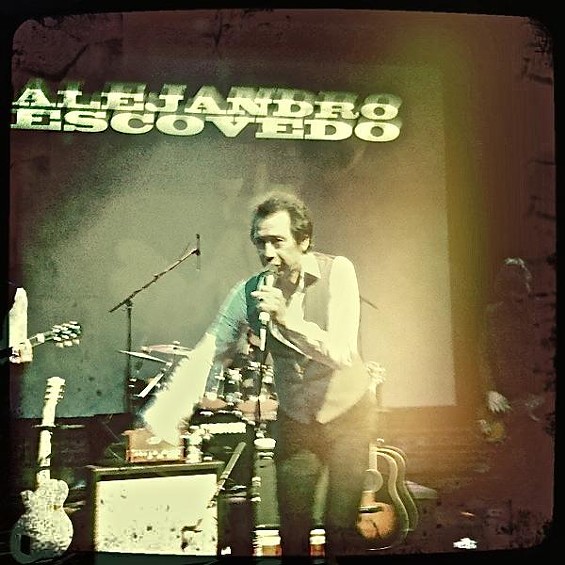 While watching Al's set, I realize the giant baby rattle is only audible onstage, lucky us. Few more drinks, called to the stage to play "Beast Of Burden," then an audible is called. Alejandro wants to close with "Wasn't I Always A Friend To You," at which point my guitar is taken away and I am handed a maraca and told to sing. Never hand a slightly drunkened guitar player a percussion instrument. Ever. My only consolation was that Bobby the bassist looked just as awkward as I felt. Hands were shook, babies were kissed and a good time was had by all. I ask Al for a joint as he's headed for the van, he returns with a pack of papers and about an eighth. "I really don't need this much," i said. "Just keep it, we have plenty, you young guys never bring enough weed," he replied.

With Jordan as pilot we head to Eastgate, my old stomping grounds, and feast like kings on Skyline Chili. Bryan decides he must walk across the parking lot to try the new White Castle garlic slider...sends me a text that was meant for his wife. He's having fun as well. Back to my buddy Kevin Miles' abode for some much needed shuteye, and back home to the Lou come morning.