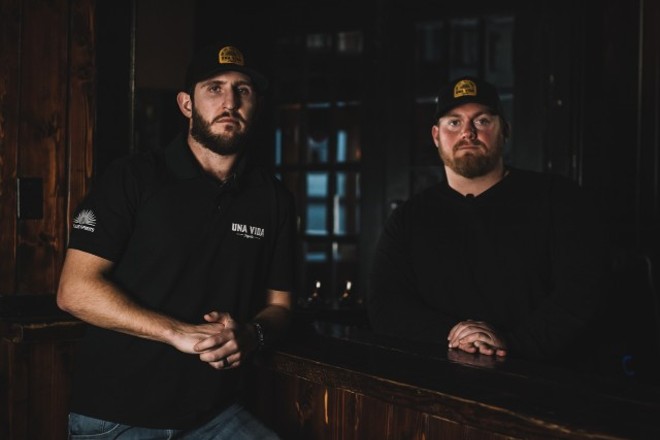 OLIVER MUELLER
Bryce Lob (left) and Zach Conley have been donating bottles of their Una Vida Tequila to hospitality workers.


Like everyone in the food and beverage community, Zach Conley and Bryce Lob have been watching in horror as the industry they work in and love is decimated by the COVID-19 pandemic. Though their St. Louis-owned tequila brand Una Vida Tequila (www.unavidatequila.com) is still operating, roughly 80 percent of its sales are based in bars and restaurants. In just a matter of days, that business has ground to a virtual halt — but it's not their own fortunes Conley and Lob have on their minds.

"We're business owners an entrepreneurs, but the interactions bartenders and wait staff have with customers on a daily basis far exceeds what we can do," Conley explains. "They are the backbone of what we do, and now they are all laid off. We figured, we can't put that money in their pockets, but at least we can give them a bottle of tequila."

Dubbing himself the "Quarantine Tequila Fairy," Conley has indeed been spreading the tequila love around town, dropping off a bottle of the spirit and a handwritten note at the homes of any industry staffer who has been laid off, is facing hard times or just needs a bit of agave cheer to get them through these trying times. As Conley explains, the idea first stemmed from a feeling of helplessness that eventually turned into action.

"We just celebrated our two-year anniversary, so we are a young company and there's not much we can do financially," Conley explains. "We took a look at the great things some of the bigger labels are doing — Jameson donated $500,000 to the U.S. Bartenders Guild. Molson-Coors donated $1 million to them. I felt like we didn't have anything we could do, so then I took a look at the pallet of tequila we had just sitting here, and I said, 'Screw it. We're just going to give it away.'"

On a whim, Conley put up a quick Instagram post, announcing that anyone in the industry — bartenders, servers, chefs, support staff — who contacted Una Vida Tequila and expressed interest would be given a bottle of tequila, free of charge, delivered to their doorstep. He expected that he'd get about ten or fifteen people to take him up on the offer. Before he knew it, his post has gotten three thousand views with hundreds of requests.

Despite the overwhelming demand, he is making good on his promise. For the past six days, Conley has been driving around town, personally delivering bottles of his wares, complete with a handwritten thank you note, to the homes of unemployed industry workers. After he makes the delivery, he tags the recipient in an Instagram post, which usually leads to them tagging their colleagues (Lob is following the same template in Wichita, where he lives). It has increased demand, but he has been able to meet it, thanks to the distributor Major Brands donating back to Una Vida Tequila twenty cases of their product in order to make sure that everyone who wants a bottle gets one.

Conley has been shocked at the reception he's received from what he considers a small gesture. And what's surprised him just as much is how this act of helping others has helped him gain perspective in these trying times.

"Some of the messages I've gotten are of people tearing up," Conley says. "I figured that it's just a bottle of tequila. I didn't understand the impact it was going to have on other people, but I also didn't know the impact it would have on me. The act of giving really puts you in a good mindset."