ILLUSTRATION BY EVAN SULT
Manufactured by one St. Louis company and distributed by another, a vial of Acthar can cost more than $40,000.

Robert Stanley calls his son Payton "a multi-million-dollar man." Before Payton was even born he had a stroke in his mother's womb during the third trimester. At two months old, he began having seizures, at times more than 100 in a day. He's had a portion of his brain removed. Today, at age five, he requires a specialized breathing treatment and cannot walk. The family makes regular trips from their home in Vinita, Oklahoma, to Memphis' LeBonheur Children's Hospital, which is widely recognized for its pediatric neurology and epileptology care. Stanley has worked two jobs so that Payton's mother Stephanie can stay home full time. Payton requires 30 medications every day, many of which cost, in Stanley's words, an "extremely stupid" amount of money.

I called Stanley last month to talk about the cost of one medicine in particular. Acthar is an injectable drug manufactured by St. Louis-based Mallinckrodt Pharmaceuticals and used to treat infantile spasms. Payton was on it for eight months in 2015. Disappointed with the pediatric care they found in Oklahoma, where doctors had misdiagnosed Payton, the family had made their first trip to LeBonheur. The doctors there diagnosed Payton with infantile spasms and prescribed Acthar. And despite the litany of high-cost medications that have been prescribed to Payton over the years, the sticker shock that came with Acthar still sticks in Stanley's memory.

"I heard about the price when I went to go pick up the medicine. I asked the representative that night, 'How much is this stuff?'"

"I about had a heart attack," Stanley told me.

A standard Acthar treatment lasts a month and requires two to three vials. Payton ended up being on the drug for eight weeks.

Fortunately, the family's insurance covered the treatment, though it ended up being ineffective for Payton, who had to eventually have a portion of his brain removed in order to treat the seizures. At least they hadn't been bankrupted by Acthar.

Rockford is a city of about 150,000 people, 90 miles west of Chicago. Like a lot of Midwestern cities, it has suffered from crime, depopulation and an image problem, occasionally ranking high on those dubiously researched "Worst Places to Live" articles. Morrissey, a Democrat, was elected on an agenda of cost saving and infrastructure improvements. One of those cost-saving initiatives was to find out exactly how much the city, which funds its own health plan for municipal workers, was spending on health care. In 2016, the auditors noticed something unusual: The previous year, the city had spent nearly half a million dollars on a drug called Acthar. Only two people on the city's health plan took the injectable drug, and between them they took a total of just nine vials. That came out to more than $54,000 a vial.

"These are funds that could have been directed to public infrastructure, economic development or crime reduction," Rockford spokesperson Laura Maher says. "[Half a million] is equivalent to approximately five police officers annually."

In the year 2000, a vial of Acthar sold for just $40. The two-decades-long story of how this drug saw its price increase from $40 to $54,000 is riddled with allegations of kickbacks, sketchy marketing and a "murky alliance" between a drug manufacturer and America's biggest pharmacy benefit manager. Key to the story are two of St. Louis' biggest corporations. 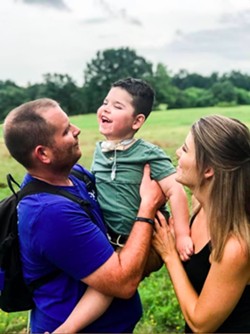 In 2017, Rockford filed a lawsuit against the drug's manufacturer, St. Louis-based Mallinckrodt, and the drug's sole distributor, Express Scripts, which also has its headquarters in St. Louis. Rockford's suit accuses the two companies of colluding to artificially raise the price of the drug. It also accuses Mallinckrodt of essentially paying doctors to prescribe Acthar even when cheaper, more suitable drugs were available.

The RFT reached out to Mallinckrodt and Express Scripts for comment. Representatives of both entities replied that they cannot comment on pending litigation.

U.S. Magistrate Judge Iain D. Johnston, who is handling the early portion of the Rockford case, wrote in a pre-trial opinion, "The issues at stake in these cases are large ... [T]he potential amount in controversy is extraordinary. The cases contain racketeering and antitrust claims, which, if successful, could lead to huge damage awards. In today's legal vernacular, these are 'bet the company' cases."

From a pig's gland to a $6 billion company

Acthar is the brand name for the naturally occurring adrenocorticotropic hormone (ACTH). In the 1940s, physician Philip Hench and chemist Edward Kendall discovered it could be extracted from the pituitary gland of a pig (usually after the rest of the pig had been butchered for meat) and injected into a human. ACTH causes humans to create more cortisone, which reduces inflammation, and for decades Hench and Kendall's discovery worked wonders for people who suffered from rheumatoid arthritis. The two men later won a Nobel Prize in Physiology or Medicine for their work.

But as decades passed, advances in medicine led to other anti-inflammatory therapies, such as Prednisone, which can be manufactured cheaply and don't come with the inevitable trace impurities that are extracted from a pig's gland along with ACTH.

By the 1990s, ACTH was no longer the preferred treatment for anything except infantile spasms, or IS, a form of epilepsy that is as rare as it is serious.

Pediatric neurologist Jim Wheless told me that there are about 2,000 new cases of IS a year. "If these kids are not treated timely with effective medication, then almost all of them will go on to have significant mental impairment," he said.

Wheless added that when it comes to treating IS, there are really only two FDA-approved medications, and of those two Acthar has been clearly shown to be superior, with an efficacy rate of about 90 percent.

"If it was your child or your grandchild and I'm sitting across the table saying, 'Gosh, if we don't jump on this and treat this effectively, the child is probably going to have significant mental challenges the rest of their life. There's only two medicines, and this one works better — what do you want to do?'" Wheless said. "You can guess what most families are going to opt for."

Wheless added, "Now, what if I tell you that the ideal medication is so expensive you have to mortgage your house? Or that you can't have a house?"

But a single vial of Acthar didn't always cost more than a down payment on a starter home.

In the 1990s, Acthar was a product of Aventis Pharmaceuticals, the only company producing ACTH of any kind. At that time, a vial of Acthar from Aventis cost about $40, and the low incidence of infantile spasms combined with the low price meant that Aventis lost money on the drug. They tried to stop producing it in the 1990s, but pediatricians intervened, saying that without Acthar parents whose children suffered infantile spasms would be without an important treatment.

In 2001, Aventis sold Acthar to California-based Questcor for just $100,000, making Questcor the only source for the first-line drug against infantile spasms. The company used this monopoly to essentially set its own price. Right after acquisition, Questcor raised the price of Acthar from $40 a vial to close to $800 a vial. The price grew steadily from there. By 2007, insurance companies and Medicare were paying nearly $2,000 a vial.

But that was just the beginning. In 2007, Don Bailey became CEO of Questcor. Over the next thirteen years, the "one-drug company" turned that one drug into a $6 billion business.

During the first year of Bailey's leadership, Questcor struck a deal with Express Scripts, making the St. Louis-based pharmacy benefits manager the sole distributor of Acthar.

Over 80 million people get their medications through Express Scripts, a buying volume that gives the company considerable power to negotiate lower prices from drug companies. The company regularly posts revenues of more than $100 billion a year.

However, Rockford's suit alleges, because of the exclusive distribution deal Express Scripts inked with Questcor, the e-pharmacy had no incentive to negotiate for a lower price and therefore did not do so.

In the months following the Questcor deal with Express Scripts, the price of Acthar went from $2,000 a vial to more than $29,000 a vial.

Eric Liebler was a senior vice president at Questcor around the time of the Express Scripts deal. Though he wasn't involved in the deal with the e-pharmacy, he was privy to the company's conversations about dramatically increasing the price of Acthar. He told me that prior to the deal the company drafted two plans for how it could increase the drug's worth.

Option one was to do a lot of research on Acthar, find new uses for it and, while doing so, raise the price gradually over several years in a way commensurate with the increased number of uses.

Liebler says he recommended the first approach, doing it gradually. The company went with the second, dramatically raising the price in short order.

"I helped them write the press release, but then I resigned immediately," Liebler said. "There are many companies who have played the price-increase game, but I'd never seen anything like this at this magnitude."