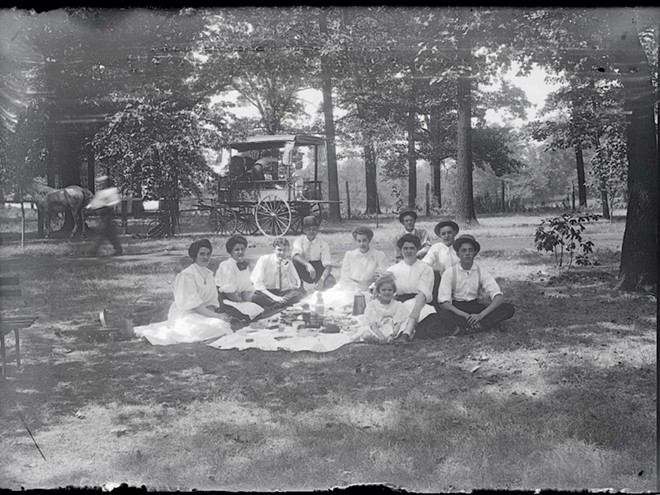 Courtesy Photo
Tower Grove Park has long been a beloved spot for a picnic.

St. Louisans know Tower Grove Park (4257 Northeast Drive, 314-771-2679, towergrovepark.org) for various reasons, from its weekly farmers market to the wide array of sports leagues that call its grounds home. But how much do they really know about the park?

According to Amanda Doyle, author of a new book on the beloved St. Louis institution, not much. She hopes her book will change that. The release of Tower Grove Park: Common Ground and Grateful Shade Since 1872 coincides with the park’s 150th anniversary, which was officially celebrated on September 28. It offers a comprehensive history of the park from its conception in the late 1860s to the present day. The book includes sections on the botany and wildlife of the park, its architecture and built structures, and the various groups who have used the park over the years.

“There's so much that I learned writing this book that I've never seen written down anywhere else,” Doyle says.

Despite having lived three blocks south of the Park with her family for almost 30 years, Doyle knew little about it when she first took on the project two years ago.

“I use it like a lot of people in the neighborhood do, as a yard instead of my postage-stamp-sized city yard, but I didn’t really know all that much about it,” Doyle says.

She knew the basics, such as that the Park was founded by Henry Shaw, the same wealthy philanthropist behind the Missouri Botanical Gardens. However, her research into the Park’s rich history has given her a new level of appreciation for it.

“Once you have that perspective, it's easy to look around and see it differently than you did before,” Doyle says.

Tower Grove Park is special in many ways. For starters, it is a National Historic Landmark, a designation not commonly held by parks. It is also one of the last fully intact Victorian driving parks in the country, originally built to accommodate horses and carriages. Eleven original pavilions from the park’s construction remain in use today, such as the Music Stand, where local artists have been performing since the days of Henry Shaw himself.

The park is also a certified Level II Arboretum, boasting thousands of trees comprising hundreds of species. In this respect, it stays true to its original intention as an oasis from the demands of city life.

“It was always planned to be a sort of a respite and get away from the hustle and the bustle and the dirt and the grime,” Doyle says.

In addition to detailed histories of various aspects of the park, the book features photographs and personal stories collected from frequent visitors, lending this history a heartwarmingly personal element that spans generations of visitors.

In one such anecdote, Doyle describes how St. Louisans in the 1930s and 40s would flock to the park on hot summer nights, preferring to sleep among the cool trees instead of their homes, which lacked air conditioning. Entire families would head to the park, bed rolls in hand, and organize themselves by parish in what was essentially a mass sleepover. Doyle is fascinated by the way the Park’s history mirrors that of the city and the country.

Courtesy photo
The winner of a sack rack grins out at the camera.

“Once you know the history a little bit you see ​​how its history has really reflected the city's history and the country's history,” Doyle says. “All of the social forces and changes and issues and movements that have happened in human society since 1872 have shown up in the park.”

The book concludes with a section about the park's future, which in part, describes the overwhelming resurgence in park visitors following COVID-19. Doyle is happy that the park continues to play a vital role in St. Louisans’ lives.

“People really changed their habits from being casual visitors to really getting intensely in touch with [the Park] again,” Doyle says. “That's a lot of it, too, just realizing how important these kinds of spaces are to us.”

Doyle has written eight other books on St. Louis and Missouri topics, including 100 Things to Do in St. Louis Before You Die and St. Louis Sound, An Illustrated Timeline. She considers local history, though often overlooked, to be deeply valuable.

“It's so important to people's lives, just [having] that kind of local history and people's personal stories,” Doyle says. “We don’t always do a good job of preserving them, you know?”