The popular online account is launching its first book 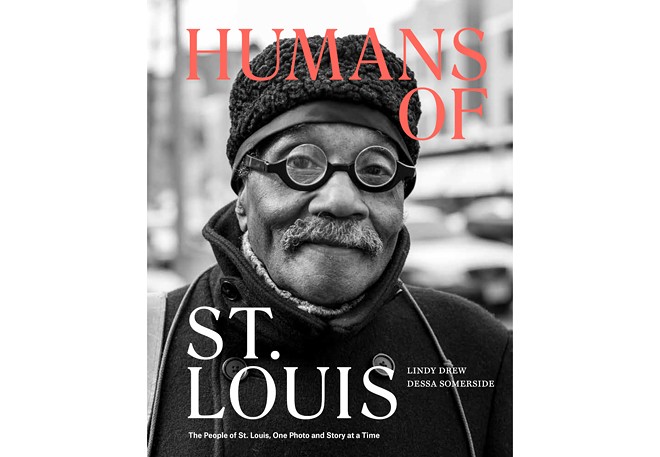 Imagine that you’re working on self-publishing a book. It’s been five years of ups and downs of fundraising and editing. Now, it’s finally here on your doorstep — all 3,250 copies on 12 pallets — and it’s time to get them in the hands of your readers.

Earlier this year, that was the scenario faced by Lindy Drew and Dessa Somerside, the authors of the Humans of St. Louis book, who spent a month of late nights in the basement of Big Brothers, Big Sisters getting everything packaged for delivery or drop off.

“We had so many volunteers help us,” Drew says. “My mom came out. My partner came out. The friends that we dance with at Club Viva came out. People just wanted to help us.”

That community support speaks to the very heart of the Humans of St. Louis organization, which will celebrate the launch of its book tomorrow at the Schlafly Public Library.

A local nonprofit, the group has been sharing the stories and photographs of St. Louis people and places on social media with the aim to promote “civic engagement and social good” since 2014. Drew, who was a social work student at Washington University at the time, founded the organization with Caroline Fish after seeing the original Humans of New York account.

Drew’s background is in documentary street photography, and that quickly showed up in her HOSTL work. She’d set out on her bike with her camera, pedaling up and down the city’s streets until she found someone to interview.

“I'll just kind of give people the time that they need to let their stories unfold,” she says, explaining she aims to get to a place of comfort. “So that by the end, they feel like, ‘You know what, I really enjoyed this talk. Whether you put it on your website or you don't, it was a really beautiful moment between strangers.’”

Drew and others began by posting the interviews to Facebook, expanding to other social media platforms over time. The stories spread organically and the platform came to have a huge following. Then, HOSTL expanded to storytelling in partnership with other organizations, creating stories about St. Louis health, arts, race, creativity and more.

But as HOSTL produced more stories, Drew realized that the older ones were getting buried. She’d seen other Humans organizations produce books and thought that might work in St. Louis, too, and the rest of the HOSTL team quickly concurred.

They found a publisher to work with but then had other thoughts and opted to go it alone. But how?

“We didn't have a penny in the bank to do it,” Drew says. “But we thought the idea might be supported by the community.” 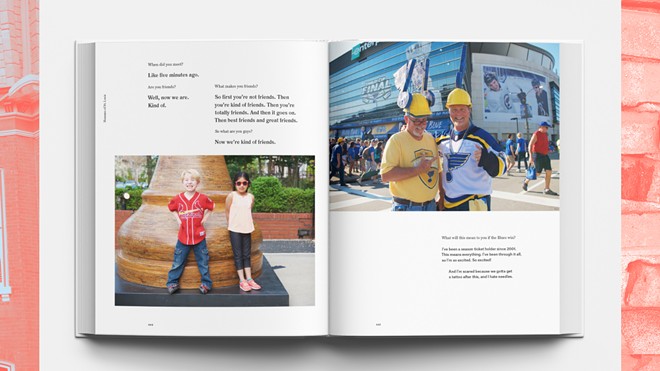 HOSTL launched a Kickstarter campaign, putting together a promotional video and mockups of what the book might look like. Within three weeks, the group had made it.

From the time the Kickstarter wrapped up to having those pallets delivered was about four years of selecting the stories to include, tracking down the interviewees and getting permission, editing and figuring out printing snafus. Drew and Somerside didn’t put it together all by themselves; rather they invited a team of editors in an effort to get as many voices as possible into the book.

Having the finished product in hand after all that feels really good, Drew explains.

“It's so cool to finally see it in people's hands,” Drew says. “It's so neat to finally see the end products, not anything like what I thought it would be. The book ended up being a lot thicker, a lot bigger, a lot heavier, a lot more dense than we anticipated, just because we wanted to include so many stories from folks and really make it seamless.”

Somerside agrees, adding that, “It's like a mix of a relief and also a sadness because I run into people every day, and they're like, ‘Oh my God, I really wanted to get a copy.’”

That’s right: Every one of the 3,250 books on the 12 pallets has been accounted for — though there are still books available in local bookstores.

So Somerside and Drew are in the midst of planning another print run. There’s a preorder list on the website. Once there’s enough orders, they’ll put in for another printing.

In the meantime, they’re just enjoying the impact the first printing is having on the St. Louis community.

“It’s been amazing,” Somerside says. “I took one to the mayor of Maplewood, and she had tears in her eyes. She was so moved because it’s about our city and … real-life people.”

“People are writing us private messages saying, ‘I was supposed to go to bed at this time tonight, but I just keep flipping through the pages;’ ‘I came home, and I read it cover to cover, and I'm so inspired,’” Drew says. “That’s been really special.”

Join the Humans of St. Louis book launch at 1:30 p.m. tomorrow at the Schalfly Public Library (225 North Euclid). There will be a panel discussion, storytelling, a celebratory toast, snacks, a book signing and more.