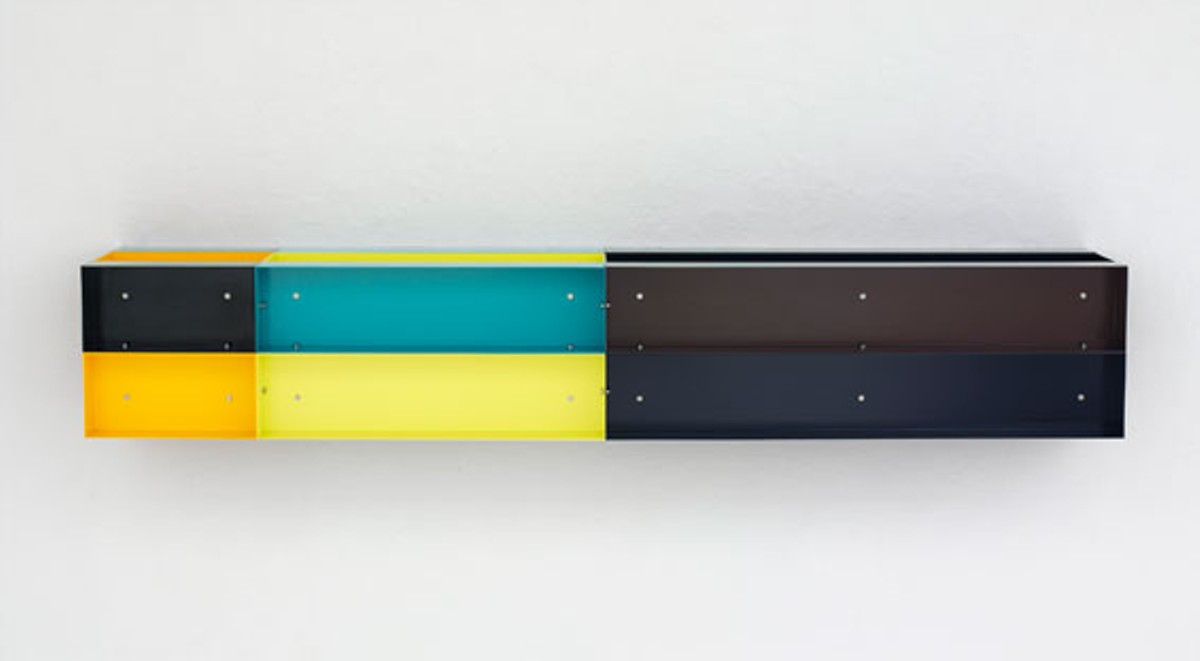 Color, or lack thereof, is a constant contemplation in all works of art. Artists often have complicated relationships with and views on the presence of each hue, and American sculptor and painter Donald Judd certainly considered elements of color throughout his 40-plus-year career. His later pieces showcase his thoughtful exploration of the "multiplicity" of color, as he called it, and in the phenomenal natural light of the Pulitzer Foundation for the Arts (3716 Washington Boulevard; 314-754-1850), the vivid works from this period ought to truly shine. Donald Judd: The Multicolored Works, curated by Marianne Stockebrand, is on view at the Pulitzer from Friday, May 10, until Saturday, January 4, 2014, and the show brings together pieces from private collections as well as the Tate and the Museum of Modern Art, among others. Expect to see 24 objects, including Judd's recognizable boxy, enameled aluminum wall pieces and a large floor piece, along with 30 drawings and collages by the artist, which have never before been exhibited. In fact, Judd's later works never have been the focus of an exhibition like this one, which makes the show and the related special events — including monthly tours, panel discussions and more — can't-miss opportunities. Visit www.pulitzerarts.org for a full calendar and for more information; exhibition admission is free.

Frontenac couple Harry and Edna Grossman lived long, quiet lives until their deaths in the 1980s. During their 80-odd years on Earth the Grossmans traveled the world, capturing their adventures and everyday experiences alike in hundreds of photographs. Several years ago, collector Jeff Phillips found a box of the Grossmans' unmarked pictures in a St. Charles consignment shop. Captivated by the simplicity and haunting beauty of the images, Phillips sought to learn more about the people in the pictures. He launched a social-media campaign called "Is This Your Mother?" and within three weeks the mystery was solved when relatives of Harry and Edna reached out to Phillips. See the Grossmans' stories unfold for yourself in Lost and Found: The Search for Harry and Edna, an exhibit featuring the family's abandoned and recovered photographs. The show opens with a free public reception from 6 to 8 p.m. Friday, May 17, at the Foundry Art Centre (520 North Main Street, St. Charles; 636-255-0270 or www.foundryartcentre.org). Lost and Found remains on display through Friday, June 21, and the gallery is open Tuesday through Sunday.

The work of Finnish film director and visual artist Mika Taanila asks more questions than it answers. Through a skeptic's lens, Taanila explores our modern age of ever-evolving, innovative technology, always equally concerned with what's been lost to progress as with what's been gained. A major recurring theme in Taanila's work is the widening gap between the modern and natural worlds, and how the human pursuit to evolve harder, faster, stronger can further expand that divide, disconnecting humanity from its primal self. His first solo show in America, Mika Taanila: Tomorrow's New Dawn, opens with a free public reception Friday, May 24, at the Contemporary Art Museum (3750 Washington Boulevard; 314-535-4660 or www.camstl.org). The exhibit includes the North American debut of a major video installation Taanila created for a German contemporary-art exhibition called dOCUMENTA, as well as a series of photograms based on famous scenes in Hollywood films. Tomorrow's New Dawn remains on display through Sunday, August 11. Admission is $3 to $5, and the gallery is open Wednesday through Sunday.

Stories from the Sea

When the Saint Louis Art Museum in Forest Park (314-721-0072 or www.slam.org) celebrates the grand opening of its brand-new East Building expansion on Saturday and Sunday, June 29 and 30, St. Louis will reap a windfall of new and old art. The East Building houses 21 galleries, with an emphasis on exhibiting contemporary art. The Main Building will reshuffle its galleries, allowing more than 400 artworks that haven't been displayed in twenty years to go back on public view.

And the space between the buildings will also be utilized.

Renowned sculptor Andy Goldsworthy was commissioned to create a permanent installation for the courtyard joining the old and new buildings. Goldsworthy drew inspiration from the geological history of Missouri for the piece; specifically, the prehistoric era when the state sat at the bottom of a vast sea. He chose to re-create that sea with the only witness to its passing — limestone, which was formed during that wetter era, and which St. Louis now rests upon. The resulting piece, Stone Sea, comprises 25 roughly hewn arches of Missouri limestone, each ten feet high, which Goldsworthy assembled in a tight grouping in the courtyard. The installation echoes in form and material the surface of that long-gone ocean, an eternally rolling mass of waves that was here before we began and will stand long after we're gone.

Stone Sea will be visible from ground level (from the first floor of the Main Building), from above (viewed from the South Terrace) and through the floor-to-ceiling windows of the East Building. Each angle will show something different about the installation, as will the passage of the seasons.